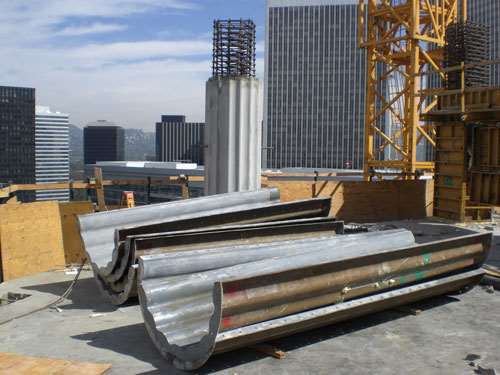 According to Kusiak, forms had to provide sufficient flexural strength to support the typical 13-ft long, 3-ft diameter (4m long, 1m diameter) poured concrete sections and had to strip or release easily from the concrete to ensure a "lavishly smooth" surface finish to meet the project's aesthetics. To achieve these goals, MFG-CP's designers developed a four-piece form — that is, each piece forms one-quarter of the column circumference — with raised flanges along each seam for joining. The forms were hand layed in shaped fiberglass cavity molds. After application of a Frekote mold release, supplied by Henkel Corp. (Rocky Hill, Conn.,), the mold surface was gel coated. The next step was to apply 24-oz/yd² woven E-glass roving from Owens Corning Composite Materials LLC (Toledo, Ohio) followed by a "core" layer of 3-oz/yd² chopped strand mat, and then another ply of woven roving. The layup was wet out with general-purpose polyester resin supplied by AOC Resins (Collierville, Tenn.). "The mold included details to create the integral joining flanges," notes Kusiak.

On the job site, a chemically reactive release agent is applied to the inside of the form, and, after installation of the rebar and base, approximately 3 yd³ of concrete are poured into the form in about three minutes. Metal "coil bolts" with large threads hold the form segments together. After a day or two, the forms are "stripped" off, easily accomplished thanks to the four-piece design, and reused. The project's architect, Patrick Treadway, says, "The fluted concrete columns were more cost-effective than the originally conceived precast or stone options and have saved construction time."