CW’s inaugural Operations Report aims to shed some light on the state of composites manufacturing today, and how it might evolve.
#autoclave #marketoutlook #layup 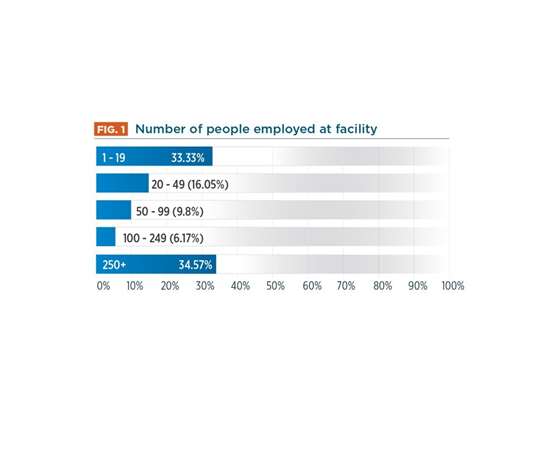 To help its audience better understand how the composites industry is evolving, and how manufacturing technologies are currently evaluated and deployed, CompositesWorld recently conducted its first Operations Survey. The results are in, and the data are presented here.

Conducted in late 2017, the Operations Survey was sent to a variety of CompositesWorld readers in a host of manufacturing environments, ranging from aerospace to automotive to marine. The goal was to learn as much as possible about the markets served, the materials and processes used, the emerging technologies and the outlook for growth.

Respondents were based mostly in the United States and work primarily in management, manufacturing, factory automation, engineering and product design and R&D. Survey questions asked for information based on the respondent’s primary facility/location only.

Responses were, not surprisingly, dominated by people who fabricate composite parts for the aerospace end-market (Fig. 2), followed by defense, industrial, automotive and marine. Further, a little more than 50% of respondents work in facilities that generate US$10 million or less in annual revenue (Fig. 3). Of all composites fabrication processes, the most common in the survey were prepreg layup, compression molding, infusion, resin transfer molding (RTM) and 3D printing. And, in addition to composites fabrication, more than 60% of survey respondents work in facilities that provide design engineering, assembly, machining/finishing, prototyping and research and development services (Fig. 4).

The good news is that respondents were, on the whole, highly optimistic about composites use at their facility and by their customers. Over the coming 12 months, 50% of respondents expect their facility’s volume of composites manufacturing, and revenue from composites, to increase. Another 49% expect those two values to remain unchanged.

We also asked respondents to look at emerging technologies and agree or disagree that use of them at their facility will increase over the next two years — 1 = strongly disagree, 5 = strongly agree. The graph in Fig. 8, above, shows the average rating (characterized as “intent”) for each technology category.  Not surprisingly, process automation, design/process simulation and adhesive bonding top the “agree” list, followed by out-of-autoclave, 3D printing, aerospace composites, closed molding, thermoplastics, preforming, Industry 4.0 and automotive composites.

There is, however, a story within this data. Responses to our query about aerospace composites intent were highly polarized, with 29% each strongly agreeing and disagreeing that use would increase at their facilities, which might reflect the fact that aerocomposites manufacturing can be highly lucrative, but also very challenging. Responses regarding automotive composites intent, however, were more clear: 62% either disagreed or strongly disagreed. This might be symptomatic of widespread uncertainty regarding the potential of composites use in high-volume vehicles. Responses regarding 3D printing intent, on the other hand, were more evenly distributed, with 20% each rating it 1, 3, 4 or 5.

CW will conduct this Operations Survey again in late 2018, with data reported in 2019. If you have suggestions for other types of information the survey might seek, please contact CW editor Jeff Sloan at jeff@compositesworld.com.