In the ongoing quest to make carbon fiber composites more affordable and better suited for high-volume automotive production, Teijin Carbon Europe GmbH, a Teijin Group company (Wuppertal, Germany) has developed a process it calls part-via-preform (PvP). Specifically designed to meet the needs of the automotive industry, PvP is a method for rapidly creating near-net-shape preforms using binder-modified carbon fiber rovings. Preforms are subsequently infused with epoxy or polyurethane resins and formed via resin transfer molding (RTM) or high-pressure RTM (HP-RTM). When combined with RTM/HP-RTM, the process is said to optimize material use, reduce waste, offer high levels of design flexibility, use commonly available equipment, produce both structural and aesthetic (automotive Class A) parts and reduce production steps, labor, waste and costs compared to manufacturing with other fabrics or prepregs. Presently, Teijin is only selling finished parts made via the PvP process rather than licensing the technology itself.

The PvP process was developed to replace more costly and labor-intensive textile-based technologies with bindered carbon fiber rovings (Tenax binder yarns with binder already in place). These rovings are chopped and sprayed into a preforming tool, where they are consolidated and the binder is cured; then the preforms are trimmed to near net shape. Since the preform is dry, it can immediately move to an HP-RTM press for infusion and final forming. Using PvP eliminates steps such as purchasing dry textiles, adding binder, cutting fabrics and curing binders to make preforms prior to infusing and forming. It also eliminates the need to buy, cut, layup and mold prepreg.

The bindered rovings are most commonly chopped and sprayed into a tool using a random fiber placement (RFP) technique, which, compared to the stiffness of continuous fiber fabrics, can be ideal for forming complex, 3D geometries. Because fibers are short and resin flows in the HP-RTM tool, parts achieve fairly high levels of isotropy, particularly with respect to mechanical properties. The process also permits tows of different sizes and performance to be used to meet application requirements. So far, fiber volume fractions (FVF) of up to 50% have been achieved, though Teijin says even higher FVFs may be possible.

Despite the generally random placement of fibers, the process yields fairly homogeneous parts. To test this, Teijin researchers did a study of a complex RTM’d part produced from a PvP preform. A total of 55 specimens with 25-millimeter diameters were subsequently punched out across the structure and weighed. Average specimen weight was 537 milligrams with a standard deviation of ±53 milligrams and a 9.8% coefficient of variation.

If a part needs higher mechanical performance in specific locations, during preform production the aligned fiber placement technique can be used to add unidirectional reinforcing patches (in the form of tapes, fabrics, or even longer binder yarns) to boost local anisotropy. The PvP process offers versatility in its ability to combine both random and aligned fiber placement, and to achieve complex shapes and local thickness variations while also holding tight tolerances.

Still more design flexibility comes with the RTM/HP-RTM process, which can create complex parts with significant geometry, including ribs, bosses, inserts, through-holes and with options to vary thickness across the part while minimizing voids. Using RTM/HP-RTM can create true 3D parts, compared to the 2D or 2.5D panels produced via compression molding.

With standard epoxy or urethane resin systems, HP-RTM cycle times can run 4-6 minutes, depending on part thickness. If snap-cure resins are used, cycle times are even faster.

Another PvP benefit is that properly designed and molded parts should require no post-mold rework when the in-mold coating process is used. This occurs toward the end of the molding cycle. As the part cures/cools, the tool opens slightly and a liquid coating is injected between the A-side of the part and the tool. The press then recloses and the now-coated part finishes curing/cooling prior to ejection. Parts exit the press with a primed surface that is ready to be painted or clear-coated, significantly reducing post-mold finishing steps. With smaller parts, additional productivity can be gained using family tools with multiple cavities.

The PvP process begins with special binder-modified carbon fiber yarns supplied by Teijin. The rovings are chopped and sprayed into a preform tool, then consolidated and trimmed to create a near-net-shape preform that can immediately be moved to an HP-RTM press to be infused with epoxy or urethane and formed. When the in-mold coating technique is used, properly designed and molded parts exit the press with such good surfaces that they can immediately be painted or clear-coated. Source | Teijin Ltd.

Both PvP and RTM/HP-RTM processes can be automated, allowing for scale-up between developmental and higher-volume production needs. The ability to integrate automated inspection equipment reduces the need for quality checks once the design is finalized, and assures the production process is stable.

Unlike alternative textile-based preforms or prepregs, where material waste tends to run high, both PvP and RTM/HP-RTM produce little scrap, contributing to an average 30% cost reduction. Another benefit is that no specialized equipment is required to use the technology, besides a tool mounted in an RTM or HP-RTM press and spray heads and choppers.

One of the disadvantages of PvP is that the resulting parts have a chopped/random fiber look, so they may not match the aesthetic needs of all potential users, although the fibers can be hidden with paint, or a layer of real fabric, or a simulated-fabric film could be backfilled in the tool before clear-coating. Another downside is that, for the time being, molders cannot access PvP technology except in the form of finished parts.

“Basically, PvP’s business model is as an integrated production process up to [production of] parts,” notes Hotani. “However, we can supply the preform technology when it is reasonable both for us and clients, depending on the circumstances.” Whether that would involve licensing the process or offering it free as part of a larger materials/services purchase will be decided in the future based on interest and other parameters.

Initial work on PvP began in 2012 as Teijin evaluated opportunities to expand its carbon fiber business downstream to intermediates (preforms) and part production. In 2014, the company introduced PvP as a highly efficient method to produce CFRP parts. And in 2016, the company announced it had developed an integrated production method by combining PvP with HP-RTM. As work on the technology proceeded, the team looked for customers and applications where the technology could be used.

The first commercial application came in 2017 with a large mounting bracket (assembly carrier) spanning most of the width of the massive rear spoiler on Porsche 911 GT3 Cup II cars from Ing. h.c. F. Porsche AG (Stuttgart, Germany). The bracket helps secure the wing to the vehicle. The spoiler provides downforce to improve stability and steering during high-speed driving. These limited-edition, high-performance cars are meant for day racing, but are also street legal, and, therefore, require maximum performance and safety while also minimizing weight. 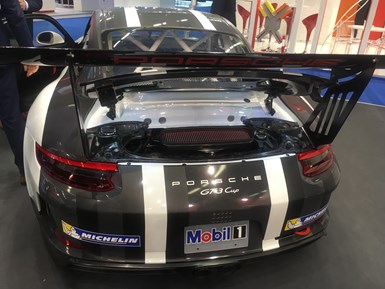 The bracket helps secure the wing to the car and replaced an earlier bracket produced with vacuum-infused carbon fabric that was higher cost and did not provide required stiffness. Source | Teijin Ltd.

Previously, the brackets had been produced via vacuum infusion using woven carbon fabrics. However, incumbent parts were both high cost and lacked desired stiffness owing to challenges getting stiff fabrics to drape into complex 3D geometries. That led to lots of wasted fabric, which further contributed to high costs. Additionally, the infusion process was labor-intensive and slower than HP-RTM.

By applying PvP and HP-RTM technology to the design using a standard automotive-grade epoxy and 50-millimeter chopped carbon fiber (50% FVF), high-quality parts with excellent load behavior that met all of Porsche’s performance requirements were produced by Teijin Carbon Europe in Heinsberg, Germany, and shipped to the automaker’s plant. Reportedly, costs were significantly lower owing to automation of the fast PvP/HP-RTM processes with in-mold coating, which reduced both production steps and scrap. Unlike benchmark brackets, no post-mold finishing was needed to achieve a smooth, pin-hole-free surface, so parts could proceed directly to clear-coat painting.

Although the Porsche assembly carrier was a short production run part, PvP technology is not restricted to low-volume applications. In fact, Teijin reports that the technology is Industry 4.0 ready and, depending on part size, thickness and preforming time, roughly 50,000 pieces can be produced annually from a single tool set with a 5-minute takt time. Faster-cure resin systems could increase production capacity, as could family tools.

While initial work has focused on epoxy and urethane matrices, other thermoset resin systems also are being explored. It might even be possible for thermoplastics — probably reactively polymerized systems — to eventually be used, although no work has yet been done with such polymers. Teijin also reports that several patents have been granted on the technology.