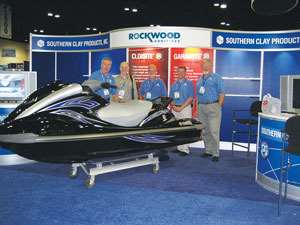 In the composites industry, the category “additives” describes a variety of materials that have in common the ability to modify the behavior, appearance, mechanical properties and/or processability of a polymer resin. The category includes, but is not limited to, flame/smoke retardants, tougheners, low-profile additives (those that reduce shrinkage during cure), UV stabilizers (to improve outdoor weatherability), viscosity-control agents and conductive fillers as well as surface-conditioning agents, pigments and other colorants that impact product appearance. Additives rarely get a lot of attention, but play significant roles in product success: Incorporated in loadings of as little as 1 percent (sometimes less), additives can make the unseen difference between a composite that is competitive with other materials in an application and one left on the sidelines. CT took the following behind-the-scenes peek at additives developments that have added value to these indispensable resin system add-ons.

In the realm of reinforced thermoplastics, the ability to customize a material for a specific application is often the key to the material’s adoption and use. In the past, however, part manufacturers often have had to dry-blend their own recipes — that is, carefully weigh and combine neat resin pellets with chopped fiber and additives in particulate form, mixing them under high shear at temperatures below the materials’ melting points. Unfortunately, dry-blended materials of different sizes, shapes and weights, says Steve Bowen, president/CEO of PlastiComp LLC (Winona, Minn.), have the potential to separate during transport and conveyance from bulk storage to the processing machinery. Natural segregation of the different sizes of materials can result in part-to-part weight variations of 5 percent or more. Further, if pigments, conductive fillers (e.g., carbon black or nanomaterials) are part of the mix, product appearance and performance can vary as well. To ensure product consistency, materials suppliers are adopting new mixing strategies. One corrective measure is to package the resin, reinforcements and additives in a single pellet. PlastiComp LLC, for example, has introduced its line of Compl?t pellets in which long fiber-reinforced thermoplastic (LFRT) technology is compounded with impact modifiers, colorants and other customer-specified additives. PlastiComp’s customers, says Bowen, have tested the materials and found them to be superior to dry-blended materials in terms of part-weight consistency and aesthetics.

These prepackaged systems not only relieve molders of the responsibility of metering and dry blending but also eliminate the possibility that human error could leave the molder with an incorrect mix that might lead to batch variations, part rejects or part failure while it is in service.

For molders who employ direct LFT (D-LFT) processes, in which thermoplastic composites are compounded at the press, additive packages incorporate multiple functionality into a single pellet that can be blended with resin pellets and fiber as they are metered into, mixed and melt-processed in the D-LFT system’s inline extruder. Typically, the formulation includes colorant (often black), stabilizers and coupling agents to deliver improved mechanicals and longer service life.

Addcomp Holland BV’s (Nijverdal, Holland) new ADD-VANCE combination masterbatch formulations, for example, reportedly are optimized to provide good mechanical properties as well as low odor, low VOC emissions — all important properties for components used in vehicle interiors. For more demanding applications, halogen- and antimony-free flame retardant systems also are available. Paul Stassen, Addcomp’s marketing/sales director, says, “The addition of our ADD-VANCE combi-masterbatch to a D-LFT formulation is typically made at around the 2 percent level, but it contributes to more than 80 percent of the quality of the final product.” Additionally, Addcomp guarantees the mechanical properties and service life of its systems in D-LFT products if inline compounding and molding conditions are handled correctly.

RTP Co. (Winona, Minn.) has enhanced its line of long fiber thermoplastic (LFT) compounds with the introduction of long-cut additive pellets, produced in masterbatches to reduce customer lead time. The additive pellets are extruded and cut to lengths that match the LFT pellets (see top photo, this page). The long-cut masterbatches (e.g., custom colors, static dissipaters, UV stabilizers, wear-resistance additives) are available as cube blends in the company’s line of LFT products. The additives can be supplied to the customer in long-cut masterbatch pellets for custom dry-blending. In this case, material separation during handling reportedly is minimized because the pellet geometry of the additives is similar to the LFT pellets. Alternatively, the pellets can be combined with LFT pellets by RTP to produce precompounded LFT pellets, each containing a proper balance of resin, fiber and additives. Further, the firm claims access to a wider breadth of additive technologies than its competitors, enabling it to offer a wider range of custom additive packages to meet specific end-use requirements. “We are in a unique supply situation because of our ability to formulate and produce long-cut color and additive packages for our LFT business,” says Eric Lee, RTP’s business manager of structural materials. “By applying our compounding competencies to long-cut additives for LFTs, we are able to create robust LFT solutions and minimize lead times for our customers.” (For background about LFRT/D-LFT technology, see “Related Content,” at left.)

As the wood plastic composites (WPC) market grows (see “Related Content”), Win Holcombe of Lonza Inc. (Allendale, N.J.) says there is great demand for additives that improve processability and surface appearance. Although EMS (ethylene bis-stearamide) additives combined with metal stearates have long been a choice for decking and other WPC products made with wood-filled, high-density polyethylene (HDPE), metal stearates can react with coupling agents in the WPC material, degrading the performance of the EPS and coupling agent. As an alternative, Lonza now offers as a replacement for its own Acrawax C EMS, a new proprietary amide lubricant called Glycolube WP-2200. The latter contains no metallic stearates and reportedly has performed well in field tests on wood-filled HDPE. Further, it can double extruder output at lower loadings (3 percent vs. 4.5 percent for EMS). Injection molded, wood-fiber-filled recycled polyolefin plastic lumber decking tiles also benefit from these additives.

For several years, the potential benefits of nanotechnology in composites fabrication have been widely recognized. Carbon nanotubes and nanofibers, in particular, are valued for their ability to impart electrical conductivity to a composite at relatively low loadings. Further, conductivity is not exchanged for a reduction of mechanical properties (often the case with other additives). Instead, the material enhances mechanical strength and other properties, such as thermal transfer. But one issue that has delayed commercialization of nanomaterials is that, historically, it has been very difficult to disperse them uniformly in a resin. With this in mind, NanoSperse LLC (Akron, Ohio) has developed several Carbon Nanofiber (CNF) Concentrates — highly loaded CNF-enhanced resin systems designed for use in thermoset formulations, using a dispersion technology licensed in January 2004. The latter was developed by the Air Force Research Laboratory (Wright-Patterson AFB, Ohio) and the University of Dayton Research Institute (Dayton, Ohio), with which NanoSperse maintains a relationship.

Initial work has focused on electrically conductive composites. Conductive carbon-nanofiber-enhanced resins provide excellent uniform conductivity within a composite while maintaining or enhancing mechanical properties. The concentrates can be used to impart conductivity to standard liquid resins and reportedly have been validated for use in formulating sheet molding compound (SMC) and prepreg. The company also offers nanofiber dispersions in bisphenol F, bisphenol A and multifunctional epoxies and cyanate ester resins.

Cloisite nanoclay additives from Southern Clay Products Inc. (Gonzales, Texas) can be incorporated into material formulations for SMC and bulk molding compound (BMC) to improve resin flow and, therefore, finished part quality. These naturally occurring montmorillonite silicate clay materials can be mined and then exfoliated — separated into ultrathin anisotropic, silicate platelets with high aspect-ratios (thickness vs. length/width). In thermosetting resin systems, the platelets reportedly offer a menu of benefits: They can replace fillers that have greater mass and can be introduced in smaller quantities to produce a finished part with lower density but equal or better physical properties. The nanothin, flat platelets also are much smaller in size than typical fillers, which improves part surface appearance. When used in combination with the established flame retardant alumina trihydrate (ATH), they boost flame retardant properties by decreasing smoke generation and increasing char formation. Further, due to their colloidal nature, high surface area and the surface treatability of montmorillonite, the platelets can serve as active sites that can be used to fix colorants (dyes) into the plastic resin.

Ciba Specialty Chemicals. (Newport, Del.), offers its EFKA additives line, which includes defoamers, dispersants and leveling agents. Andre Bendo, Ciba’s NAFTA industry manager, Industrial and Decorative Coatings, reports that the company is promoting EFKA 4010, an antiseparation additive based on a modified polyurethane, for use with SMC and BMC. This additive prevents separation of the resin and another additive, the LS/LP (low-shrinkage or low-profile) additive used to reduce in-mold shrinkage during cure. The additive is used at 0.3 percent to 1.0 percent of the total formulation and is equally beneficial in maintaining particle dispersion in unfilled and filled/pigmented resins used to compound SMC and BMC.

Additives used to best advantage can contribute to environmental goals by reducing scrap rates, thereby minimizing the amount of material headed to the landfill, asserts Kevin R. Lassila, director of technology for BYK USA Inc. (Wallingford, Conn.). In the past this was not a large consideration for additive suppliers, but now additive researchers say they are focusing on designing effective additives while enabling compliance with “green” regulations, specifically by producing additives that do not leach chemicals into the environment at any stage of their lifecycles.

One of the new “green” additives is NanoBYK 3601, a nanoparticle dispersion of alumina. NanoBYK 3601 was specially developed to improve the scratch resistance of radiation-curable coatings. Incorporation of the additive at low concentrations — 1.5 percent to 6.0 percent — can provide long-term scratch, mar and/or abrasion resistance without significantly affecting optical clarity, gloss, color or other physical coating properties. Developmental variants of this product, dispersed in acrylic or epoxy monomers, have shown improvements in the physical properties of composite materials, such as gel coats.

Huber’s newest ATH grade, MoldX A100, is designed to provide lower viscosity in highly filled thermoset resins than can be achieved using standard ATH grades. Intended for use in SMC, pultrusion, wet molding and open-mold layup applications, MoldX A100 ATH can be added to standard isophthalic resins systems at loadings of 300 phr (parts per hundred parts of rubber) and more. This can enable the production of composites that meet most flame and smoke requirements without the use of other flame retardant additives.