Acrylonitrile from biomass scales up

The precursor that represents the current state of the art is the monomer acrylonitrile (ACN), which is derived from petroleum and polymerized into polyacrylonitrile (PAN), which then is converted into carbon fiber via spinning, oxidation, carbonization and surface treatment.

The vast majority of the world’s carbon fiber is derived from PAN made using an ACN monomer of propylene and ammonia. ACN is polymerized into PAN by combining it with plasticized acrylic comonomers and a catalyst. This entire chemical production and conversion process is complex, expensive and energy-intensive. Further, producing 1 kilogram of carbon fiber requires 2 kilograms of PAN, which gives PAN a conversion rate of just 50% — and a relatively large greenhouse gas footprint.

Research into other, less expensive, CO2-friendly precursor sources has generally followed one of two paths: Find a biotic material that can replace PAN, or find a biotic material from which to derive PAN. The biotic material most closely evaluated to replace PAN has been lignin, a highly abundant plant-based polymer found in nearly all terrestrial plants and sourced primarily from wood and wood pulp products (see “Alternative precursor R&D: Lignin in the lightweighting limelight”). Lignin, although promising, appears to have significant chemical and mechanical limits as a viable precursor.

However﻿, the path to a PAN sourced from a biotic material, although still immature, is showing significant promise and has many of the hallmarks of commercial viability. Leading this effort is Southern Research (Birmingham, Ala., U.S.), a nonprofit research and development organization focused on engineering, energy and environment, drug discovery and drug development. Amit Goyal, director — Sustainable Chemistry and Catalysis at Southern Research, is directing a U.S. Department of Energy (DOE)-funded project to develop a novel, commercially viable, cost-effective thermochemical process that enables use of non-food sugars for the production of ACN.

The goal of the effort, says Goyal, is relatively simple: “Make a drop-in replacement for ACN from a non-petroleum source — make the same material competitively priced with a smaller greenhouse gas footprint.” If the goal is a simple one, achieving it is not. Still, it appears Goyal and Southern Research are on track to success.

The non-food sugars (or carbohydrates) being used in the project are known chemically as C5 and C6, or, more familiarly, xylose and glucose, and they are harvested from wood-based biomass. Goyal says C5/C6 sugars refined from biomass via hydrolysis are widely available globally and can be easily and readily sourced. The trick is the conversion of these sugars into ACN, and this is where Southern Research has done most of its developmental work. The manufacturing process the company has developed involves passing the sugar feedstock through a series of three catalysts, with each catalyst producing an intermediate material and, in the process, generating a chemical byproduct. Fig. 1 shows the inputs and outputs for each catalytic step:

Fig. 1 Bio-based acrylonitrile (ACN) catalytic sequence. One of the most valuable byproducts of the process is propylene glycol, which has a high market value and helps to offset costs. The process minimizes production of poisonous hydrogen cyanide. Source | Southern Research

Goyal says the “catalysts are the heart of the technology” that Southern Research has developed and are key to the viability of the process. One of the major advantages of the catalyzation, he notes, is the byproducts produced, including propylene glycol. “This has good value on the market, which helps reduce the cost of the process,” he asserts. Also notable, he says, is the low overall hydrogen demand of Southern Research’s process. “Every sugar has a lot of oxygen in it,” he notes. “If you want to remove oxygen from a molecule, you have to add a lot of hydrogen. What we are doing uses very little hydrogen to remove oxygen, and then we use dehydration to remove the rest of the oxygen.”

Finally, Southern Research’s ACN manufacturing process should be recognized for what it does not produce. “When we do ammoxidation, there is no production of hydrogen cyanide, which is a terrible poison,” Goyal says.

With a production process established, Southern Research next had to answer how the quality of its ACN compared to an ACN derived from a petroleum-based feedstock. Goyal says that although the bio-based ACN is highly pure, there is natural skepticism among carbon fiber manufacturers that a bio-based ACN can replace petroleum-based ACN as a pure drop-in: “When you have a first of kind technology, it’s hard to find a first customer who wants to try the technology.”

To that end, Southern Research worked with Solvay Composite Materials (Greenville, S.C., U.S.) to assess performance characteristics of the material, produced in a lab environment. Initial results of this assessment were highly encouraging, signaling that Southern Research should expand its efforts to commercialize this technology. 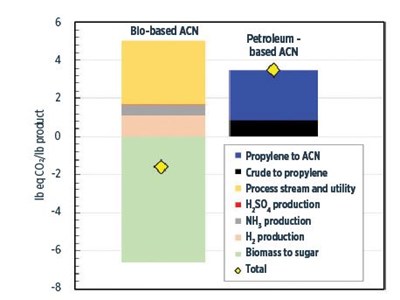 Quality and purity questions notwithstanding, there are two aspects of bio-based ACN production that appear to convey significant advantage: Life cycle assessment (LCA) and cost. Southern Research conducted an LCA of biomass-to-ACN manufacture and compared it to petroleum-to-ACN manufacture. The results (Fig. 2) show that bio-based ACN manufacture offers a carbon footprint of -1.57 pounds equivalent CO2 per pound of finished product, compared to 3.5 pounds equivalent CO2 per pound of finished product for petroleum-based ACN manufacture. In short, the biomass feedstock allows for a process that conserves carbon emissions. And to have such a carbon-conserving technology operating at the front end of a high-carbon-footprint manufacturing process makes it even more meaningful.

According to Southern Research’s work, the cost of ACN production from biomass varies depending on the purity of the C5/C6 feedstock. As expected, the highest quality feedstock is usually the most expensive. Further, says Goyal, the cost of his bio-based ACN is most sensitive to sugar feedstock price. “The main factor that affects the cost of production is the cost of sugar, not the catalyst,” he says. “The sugar price, because we are using second-generation sugars, impacts us the most.” Sugar feedstock currently runs $300-$450/ton, which allows for ACN production costs of $0.60-$0.98/pound. Using what Goyal describes as “optimum sugar quality,” the production cost of bio-based ACN is $0.72/pound. Compare this, says Goyal, to the production cost of petroleum-based ACN, which has a 10-year average of $0.85/pound. Further, he believes that the cost of sugar feedstock could decrease by more than 50% over the next several years.

In an effort to mature bio-based ACN production toward commercialization, Southern Research is currently building a DOE-funded $6 million small-scale production plant in Birmingham, capable of producing up to 1 kilogram/hour of ACN. Goyal says this facility, when fully functional in fall 2019, will produce ACN in small batches for in-house assessment as well as customer trials. Southern Research, says Goyal, is seeking carbon fiber manufacturers who are willing to work with the organization to help it assess bio-based ACN in a real-world manufacturing environment.