At the 49th event, records are set for attendance and aircraft orders, and airframers go on record about composites-related developments.
#f-35 #airbus #braiding

The 2011 Paris Air Show set records in many categories. This year, 2,113 exhibitors, including all of the top 100 aerospace firms in the world, populated 28 international pavilions. Source: Airbus; photo: C. Verrier

More than 150 aircraft were on view as well — giant military transports and jets, and both manned and unmanned rotorcraft. Source: Ernoult

Fig. 3: Latecoere (Toulouse France) showed off a demonstrator passenger door for a commercial jet. Tooling supplied by Compose (Bellignat, France) made it possible to mold the complex component in one piece via RTM. Source: Bob Griffiths

Fig. 5: A close-up of the Fokker wing focuses on the skin-to-web joints. Source: Bob Griffiths

Fig. 11: A close up of a fiber-placed Airbus A350 fuselage panel, fastened to frame members with metal straps. Source: Bob Griffiths

One of the world’s largest aerospace events, the International Paris Air Show, is also the oldest. Established in 1909, it took its 49th turn this year the week of June 20-26. The 2011 event set records in many categories. This year, 2,113 exhibitors, including all of the top 100 aerospace firms in the world, populated 28 international pavilions. More than 150 aircraft were on view as well — giant military transports and jets, and both manned and unmanned rotorcraft. Show officials estimate attendance at 145,000 aerospace professionals, plus 200,000 visitors from the general public. Louis Le Portz, the show’s commissioner general, also pointed out that a record number of new aircraft orders were announced at the show — Airbus topped them all with 730. That is a clear sign that, at least in the aerospace industry, the recession is past. It is good news, as well, for those in the composites industry who benefit from aerospace engineers’ growing comfort with and demand for composites.

Air demonstrations were highlighted by a special appearance of the Solar Impulse. On July 8, 2010, the solar-powered, composite-airframed flyer set a phenomenal record, flying without fuel for more than 26 hours, powered only by electricity harvested by its wingtop solar panels and stored in onboard batteries to power the four motors that turn its props. The fruit of a project begun in 2003 by Bertrand Piccard and André Borschberg, the plane is in pursuit of the aircraft world’s once impossible dream — virtually uninterrupted flight. The Solar Impulse development team is at work on a second prototype that will attempt classic air travel endurance feats, including crossing the Atlantic Ocean, flying coast to coast over the U.S. and flying around the world. 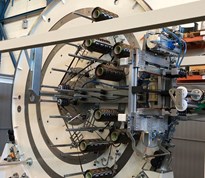 The air show is always an exciting event, often because of news generated by the rivalry between commercial aircraft giants Airbus (Toulouse, France) and The Boeing Co. (Chicago, Ill.). A much-anticipated revelation was whether or not Boeing would counter the re-engined A320 (now dubbed the A320neo) from Airbus with an all-new 737. On that score, Boeing CEO Jim Albaugh’s presentation didn’t deliver: Boeing has not resolved that question, he reported, and will not do so until the end of the year, at the earliest. However, a second Boeing presentation, given by Mike Bair, VP of the Advanced 737, and Nicole Piasecki, VP of business development and strategic integration, outlined the current options from which Boeing will choose for smaller aircraft.

The first is to re-engine the existing aircraft with more efficient hardware that incorporates bigger fans. In the case of the 737, which has a lower undercarriage than the A320, the fan would be smaller than that on the A320neo. But Boeing claims it could still deliver a more efficient aircraft because the 737 would be lighter, due in part to the lower and, therefore, lighter undercarriage. The company also predicted that, with an engine change and improved aerodynamics, fuel efficiency would improve by 20 percent compared to the existing aircraft.

The second option is an all-new aircraft. The baseline for such an aircraft would have a high fraction of composites, harvesting the lessons learned on the 787. Emerging technologies such as out-of-autoclave (OOA) curing will not be used, according to Bair, but a key issue is the need for a good manufacturing plan. Two interesting details were discussed. First, the 737 replacement might have twin aisles — pressure coming from the low-cost carriers that could use the more rapid embarkation and disembarkation to squeeze an extra flight into each day, typically going from 17 to 18 per day. Also, when asked about unducted fans, Bair was dismissive, at least for aircraft of the size made by Boeing, because of the problem of dealing with the “blade off” case with such a large blade, the possible trajectory of which is unpredictable.

One thing is clear: Bair rejected a third option, that of launching both programs. It would be impossible to recover the engine-development costs on a short-lived re-engined aircraft. But a fourth option is viable and still on the table: Boeing could justify continuing to sell the existing 737 alongside a new aircraft.

Despite the lack of news about all-new composite aircraft, there was plenty of evidence that OOA materials and processes are continuing to earn the respect of aerospace engineers. Several signs indicated that the resin transfer molding (RTM) process could earn a secure position in the tough territory of ultrahigh performance aircraft parts. The CFM Leap jet engines were displayed on the SAFRAN (Paris, France) stand, with RTM composite fan blades and fan cases (see Fig. 1, at right). The blades and case incorporate preforms assembled in the U.S. by Albany Engineered Composites Inc. (Rochester, N.H.). It was of note that SNECMA now presents itself to the world under the brand name of its owners, SAFRAN. On the IHI (Gunma-ken, Japan) stand, a developmental fan blade (Fig. 2), also molded by RTM, was on show, but details of the resin, fiber preform and engine application were not available. The biggest RTM part on display was made by Latecoere (Toulouse, France). The passenger door (Fig. 3) successfully demonstrated how this process could be used to integrate the many parts of a previously metal structure into a single composite part. The tooling for this complex part was supplied by Compose (Bellignat, France). The demonstrator project was called COMDOR (COMposite DoOR) and was funded by the French government’s Directorate General for Competitiveness, Industry and Services (DGCIS).

Of equal interest was a rudder on the TenCate (Nijverdal, The Netherlands) stand made for the Boeing Phantom Eye UAV. Its two skins, ribs and a leading-edge closing channel were welded together using KVE’s (The Hague, The Netherlands) induction heating process, which can fuse carbon fiber-reinforced thermoplastic composites without the use of a susceptor, such as the steel mesh used in early welded thermoplastic composite structures. (Steel mesh was used, for example, to deliver heat to the welds on the Airbus A340-600 wing leading edge. (See “Reinforced thermo plastics in ...." under "Editor's Picks.") Fig. 7 shows the rudder assembly and the excellent quality of the skin surface after welding.

After Boeing’s claim that the lower undercarriage on the 737 gives it a weight advantage over the A320, it is not surprising that there was an interest in achieving lighter weight by using composites in this application. These heavy steel structures must be the lowest-hanging fruit for composites, although their size, criticality and thickness makes them a challenge. On the Albany Engineered Composites stand was a model of the undercarriage side stay for the 787. Fig. 8 shows the two pairs of links fitted to the aircraft that went to the Farnborough (U.K.) Air Show in 2010. Although they were almost certainly metal on this early development aircraft, the production parts will be composites, made by RTM with a complex preform using a number of technologies, including braiding and tufting.

On the Fokker stand was a composite drag brace, made by Fokker’s Landing Gear Division (Helmond, The Netherlands) for the NH90 helicopter (see Fig. 9). It was made by RTM undertaken by NLR (Marknesse, The Netherlands) using semi-automated preform manufacturing. The preform for the brace included subpreforms manufactured from a quasi-unidirectional specialty fabric. The assembled preform was overbraided, via computer-controlled equipment, by Eurocarbon BV (Sittard, The Netherlands). The part has been extensively tested (including drop testing) with the goal to have it qualified for a test flight on the NH90 by the end of this year. It is hoped that the composite trailing arm can become a “technology insertion” into production landing gears when the maturity of the technology has been demonstrated. Fokker also is working on two other undercarriage projects, the first with Goodrich Corp. (Charlotte, N.C.) to introduce composite landing gear drag braces on the F-35 Lightning II. The braces will be molded at Goodrich’s landing gear facilities in Cleveland, Ohio, and Ft. Worth, Texas. The second is for a commercial aircraft for an as-yet unnamed customer.

OOA parts on display also included several made by resin infusion with oven cure. The biggest of them were from Premium AEROTEC GmbH (Augsburg, Germany), as can be seen in Fig. 10. This display was made from two unrelated demonstrator parts. The outer component is a fuselage barrel with top-hat stiffeners made by vacuum-assisted RTM (VARTM). It was cured in one shot in an oven. Mounted inside the barrel was a helicopter frame, made in four parts via infusion. Alongside this development part, for comparison purposes, was today’s technology in the form of an Airbus A350 fuselage panel, formed via automated fiber placement (AFP) and cured in an autoclave (see Fig. 11).

Hexcel (Duxford, U.K.) showed a fuselage frame (see Fig. 12) cured in an oven under vacuum for the Avibras Falcao, a Brazilian UAV. It was made from Hexcel’s M56 prepreg reinforced with IM7 carbon fibers and glass fibers. The fabric uses Hexcel’s Primetex technology, aimed at providing a virtually gap-free fabric and enhanced properties, claims the company.

The most clever infused part, however, was on the stand of a small technology company, PPE (Saint-Avold, France). As shown in Fig. 13, this panel includes monolithic areas, including a complex inlet, single-honeycomb sandwich and areas of double honeycomb. PPE says its patented technology enabled the part to be infused with liquid resin, yet it keeps resin from invading the cells of the honeycomb.

From NIPPI (Yokohama, Japan), a subsidiary of Kawasaki Aerospace, came the winglet shown in Fig. 14. Made with VARTM, it uses Cytec Engineered Materials’ (Tempe, Ariz.) Cycom 890 RTM resin with a preform that incorporates Hexcel’s (Stamford, Conn.) AS4 carbon fabric, glass fabric and copper mesh for lightning protection. One VARTM molding replaced eight parts, and another molding combined two parts. Compared with the baseline autoclaved-prepreg assembly, this new winglet replaces 10 parts with just two. Part integration results in a 20 percent weight reduction and cuts the overall cost by a massive 50 percent.

Undoubtedly the most novel composites technology at the show was displayed by the Fraunhofer Institute for Chemical Technology (ICT) (Darmstadt, Germany). It addresses the problem of deicing carbon fiber composite structures. Most conventional deicing solutions involve metallic elements of some type. Compared with the carbon fiber composite laminates in which they are incorporated, the metal components have very different thermal expansion coefficients and stiffness moduli as well as inferior fatigue properties. The Fraunhofer researchers have developed a nano-additive for a carbon fiber-reinforced laminate. The additive has electrical conductivity sufficient to make it a viable heating element. The test part was demonstrated on the Fraunhofer stand. It was heated to about 50°C/122°F — much higher temperatures were possible but, the company claimed, had been judged unsuitable for a public display!

Over the past decade the number of composite parts at the Paris and Farnborough air shows has gradually increased. In the past, most of these parts were made from prepreg, and many were hand layed. This year, the first of a new decade, was different. The vast majority of parts on display used composite technologies that were only the subject of research projects a few years ago, and their applications were not limited to thin structures but now include substantial parts in undercarriage and aeroengine applications.