The latest technology from BriskHeat, Hexagon Manufacturing Intelligence, and Olympus

BriskHeat’s (Columbus, Ohio, U.S.) LYNX Temperature Control System is a modular PID temperature control system that controls up to 1,024 zones, and is designed for use with composites curing and other industries.

Each heater can be individually controlled and monitored using the LYNX system, ensuring that users know each unit’s performance status, which is indicated through a large full-color touchscreen interface, indicator lights, remote monitoring and email alerts.

The LYNX Operator Interface controls up to eight lines of connected temperature control modules with up to 128 modules per line, up to 1,024 heaters, with user-configurable graphical mapping and naming to match the customer’s application and facility. It features global and individual programming with the menu-driven interface.

The compact temperature control module can be used as a free-standing unit for use with any of BriskHeat’s heaters up to 7 amps. It features three-button programming and a highly visible status indicator light, and can communicate to other systems using Modbus.

The software was originally created to efficiently import and analyze all file types and sizes at high speed. According to Hexagon, using WORKXPLORE often enables users to take less than half the time to open a file compared to the original CAD application.

Among the new and enhanced two-way workflow functionality in WORKXPLORE 2020.1 is the ability to import and export the IGP file format for the Hexagon I++ Simulator, which is a server-based software for multi-kinematic simulation of process-oriented inspections to automate production metrology.

WORKXPLORE can export either opened or closed solids, mesh models as meshes, and also import meshes. 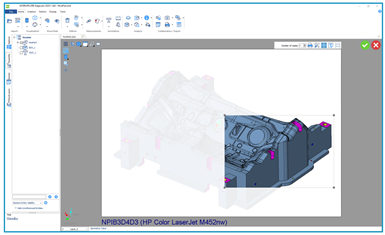 Additional reader translators include Solid Edge 2D Importer and the IGES Reader Translator. The ability to read drawings has been added to the Solid Edge interface. Currently, 2D supported versions are ST1 to 2019. The IGES translator allows users to choose between the in-house integrated import library and the Datakit Advanced Import, giving a choice for the setting best suited to specific needs.

A Print Option enhancement gives more interactive printing functionality in the single view layout by manipulating entities over the printing. According to the company, the printing zone in this enhancement can be defined through an interactive rectangle, with the ability to move the camera in the 3D screen. When the command is launched, a mask corresponding to the paper ratio appears onscreen and enables users to move the model to precisely define the printing area. Another interactive rectangle provides an optional crop facility. A toolbar with the print options is also now available on the right side of the screen, making it easier to select the target printer and define its properties, select the paper size and add headers and footers.

Another new function enables measurements done in WORKXPLORE to be exported to the Client Viewer.

The OmniScan X3 is designed for use with composites, pressure vessels, welds or pipes. ​​​​​​​

The comprehensive onboard scan plan tool is said to enable users to visualize the inspection, helping reduce the risk of errors. The entire scan plan, including the TFM zone, can be created in one simple workflow. Creating a setup is also faster with improved calibration tools and support for simultaneous probe and beam set configuration, onboard dual linear, matrix and dual matrix array creation and automatic wedge verification.

Certified IP65 dustproof and water-resistant, the instrument has the reliability and ease of use that OmniScan flaw detectors are known for combined with high-quality images that help make interpreting flaws more obvious. With the total focusing method, users can produce geometrically correct images to confirm the characterization of flaws identified through conventional phased array techniques and obtain better images throughout the volume of a part. Additional features that enable outstanding images include a 16-bit A-scan, interpolation and smoothing and a vivid 10.6" WXGA display that provides clarity and visibility in any light.

The OmniScan X3 flaw detector makes analysis and reporting faster, both onboard the instrument and on a PC. The instrument also comes with a variety of data interpretation tools such as circumferential outside diameter (COD) TFM image reconstruction to facilitate interpretation and sizing of long seam weld indication, and​​​​​​​ a merged B-scan to facilitate the screening of phased array weld indications while simplifying workflow.