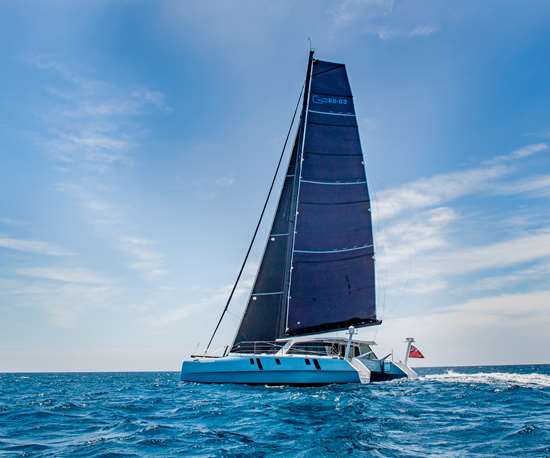 Scheurer cites engineering technology and 3M’s bonding mechanism for the success of the project.

A close-up of the 3D printed part

The Moonwave is a privately-owned, luxury sailing yacht refitted from a carbon fiber composite Gunboat 60 catamaran built by Gunboat (La Grande Motte, France; owned by Grand Large Yachting Inc.). The boat has been upgraded with high-tech gadgets like a custom hybrid propulsion system, and is outfitted with a carbon fiber hull, spars, steering wheel, propeller, and retractable rudders and dagger boards, as well as aramid fiber shrouds with carbon fiber chain plates.

The crew recently commissioned Scheurer Swiss to develop more efficient bearing cages to hold the ball bearings that rotate against the rudder shaft when the steering mechanism is turned. To make steering of the Moonwave smoother and easier, the parts needed to be lightweight, efficient, strong, durable and fairly large — up to 630 millimeters in diameter. According to Dominik Scheurer founder and CEO of Scheurer Swiss, the company has used carbon fiber-reinforced polyamide 12 (PA12) in high-performance motorsports applications, but the Moonwave project was the first time it applied the material with 3D printing.

Thanks to 3D printing, the lead time for the project, from CAD file to fully produced parts, was three days, for a project that Scheurer says would’ve taken at least three weeks had it used a standard molding process. The parts were produced in smaller pieces and then bonded using an adhesive from 3M (St. Paul, Minn., U.S.).

Dominik Scheurer, a composites engineer himself, founded Scheurer Swiss GmbH in 2009 and ran the business by himself until 2016 when he was joined by engineer Robert Tween. Both Scheurer and Tween had previously worked on composites materials for a variety of applications, including racing and motorsport, producing composite materials for Formula 1 racecars.

Scheurer Swiss GmbH has been expanding, with more personnel and capabilities and a full range of services, from consulting to engineering to production. The company has produced fiber-reinforced components for aerospace, racing and motorsport, defense and security and industrial applications.

Scheurer plans to continue updating the technology and materials used on the Moonwave for other marine projects.