Ushering in a new era for windows … and more 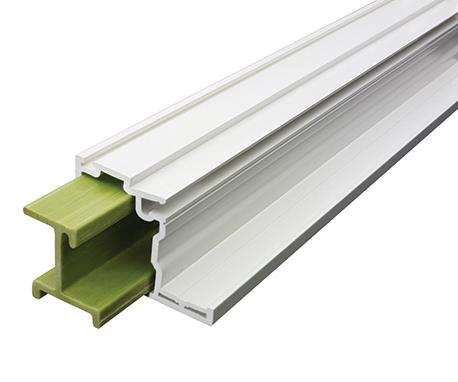 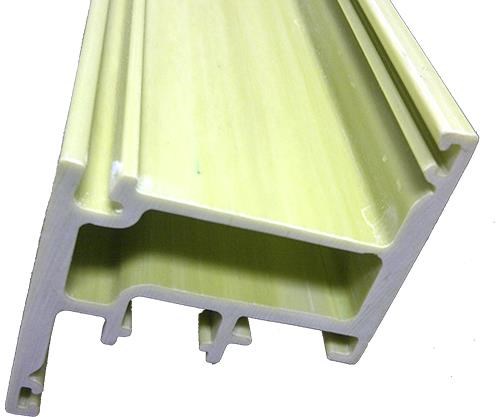 From windows to doors. Deceuninck has a number of initiatives underway to expand its glass-filled pultruded polyurethane technology beyond window applications. Pictured here is a test profile for a balcony door sash under development in Europe. The profile is 60 mm wide by 75 mm tall, with wall thickness ranging from 2.5 to 5 mm. The part replaces a PVC profile that has an internal steel reinforcement. Source: Deceuninck 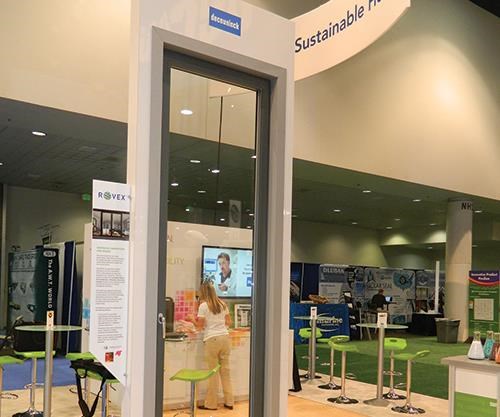 Demo patio door.   Deceuninck displayed this demonstrator patio door with a sash comprising glass-reinforced polyurethane at the 2014 GlassBuild show. The company is partnering with a US-based door manufacturer in the development of a multi-panel polyurethane door system to replace an existing door made of vinyl and steel reinforcements. Source: Deceuninck 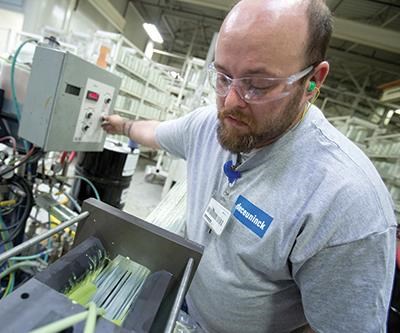 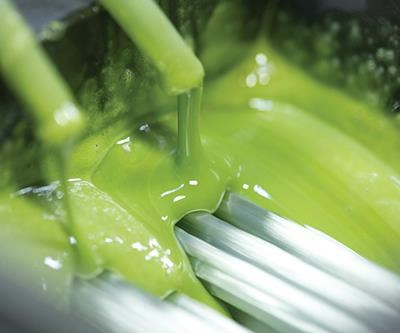 Glass rovings and polyurethane meet and are combined as they are fed into the pultrusion die. Source: Deceuninck

Despite recent groundbreaking applications — the high-profile, 12-story FRP rain-screen façade included in an expansion of the San Francisco Museum of Modern Art (SFMOMA, San Francisco, CA, US), for one (read about SFMOMA’s composite rainscreen façade online under "Editor's Picks" on the top right) — the use of composites in the construction industry remains the exception, not the rule. In most building substructures, vinyl, wood, concrete, steel and aluminum predominate. Not so, however, in windows.

Here, an initial composites beachhead has been established  in the residential construction market, primarily in the form  of pultruded, glass-reinforced polyurethane components, and composites appear to have gained enough of a foothold there to spur plans and developmental activities aimed at wider commercialization of entirely new composite building/architectural applications, such as doors, skylights and even curtain walls (windowed façades) for high-rise buildings. 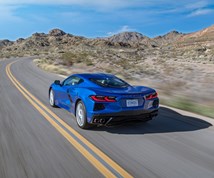 This assault has been spearheaded by the ongoing development work of a handful of materials suppliers and window manufacturers, which are capitalizing on a convergence of new window technology, changes in the International Building Code and the introduction of the US EPA’s Energy Star 6.0 rating system, a federal energy performance standard for window systems (read about changes in the IBC online in "Architectural Composites: Rising to new challenges" under "Editor’s Picks" on the top right).

That new technology features glass-filled polyurethane, a key benefit of which is its 1,000 times greater effectiveness as a thermal insulator compared to aluminum, which translates to much less thermal loss. Paul Platte, market manager at Covestro LLC (formerly Bayer MaterialScience, Pittsburgh, PA. US), says the impact of the EnergyStar rating system is just beginning to impact the window market. “We’re living in a time of generally higher energy costs,” Platte says. “Both window manufacturers and contractors can tout the EnergyStar certification as a competitive advantage, compared to windows without it.”

During the past five years, Covestro has been working with  a number of window and door manufacturers and suppliers  on development projects aimed at achieving new commercial composite applications, using its pultrusion-grade polyurethane resins. The materials, which are part of the company’s Baydur family of resins, are specially formulated to enable to use of glass loadings higher than what normally can be achieved with conventional pultrusion resins.

“Growth has been tremendous,” says Philip Morton, director of business development. In 2015, shipments of the window inserts increased 40-50% over 2014 volumes,” and the company expects similar growth rates during the next several years. Morton also says the company is involved in development work to broaden its product range, beyond its role as a reinforcement, into primary shapes for a variety of building components.

The high glass content is the critical element in the structural properties of the stiffeners, imparting a flexural modulus of about 7.9 million psi (54,468 MPa) compared to about 10 million psi (68,947 MPa) for aluminum. Deceuninck designs for windows in a variety of sizes. When a residential window reaches a critical size, roughly 1,120 mm to 1,220 mm and wider, vinyl profiles require reinforcement to achieve the necessary resistance to wind load and deflection. That  size threshold is even smaller for windows in commercial buildings, which have more stringent load requirements.

Morton says there are a number of compelling reasons  to believe the uptick in sales of the company’s polyurethane materials technology is both real and a harbinger of new applications to come. To achieve, for example, the voluntary Energy-Star certification, a residential window must have a measured U-value rating of 0.27 or less, independently certified according to test procedures established by the National Fenestration Rating Council (NFRC, Greenbelt, MD, US). U-value is the overall heat transfer coefficient, measuring the heat transfer (in watts) through 1m2 of a structure divided by the difference in measured temperature across the structure. Innovations have advanced glass to increasingly higher levels of U-value performance. However, the ongoing use of aluminum and steel reinforcements has become a “thermal short circuit within the entire window system,” according to Morton.

Another factor favoring the selection of polyurethane — in this specific case, as window frame and sash inserts — is the compatibility of polyurethane with vinyl. At one time, window manufacturers had no other choice but aluminum or steel  as reinforcing materials. Cutting and processing these materials requires different types of machinery than that used to process softer vinyl, Morton says. Polyurethane, however, can be processed with the same machinery used to cut vinyl, which saves capital costs. Additionally, aluminum/steel chips from cutting are a contaminant that abrade and mar the surface of vinyl, resulting in scrap. Polyurethane eliminates this scenario and the burdensome QA procedures now in place to avoid it.

The addition of a new section to the International Building Code in 2009 officially opened the door to FRP materials in buildings taller than four stories in interior finish applications, such as walls and ceilings, and in nonstructural exterior applications such as curtain walls, cladding and rain screens, provided they meet the fire propagation acceptance criteria of the National Fire Protection Assn.’s (Quincy, MA, US) NFPA 285 test method. Covestro’s Platte notes, however, that more than 60% of commercial buildings in the US are three stories or shorter, according to data published by the US Department of Energy. Performance requirements (load, deflection, fire and smoke) for high-rise applications also are more stringent and costly. Accordingly, Platte says, the company expects that the next phase in the market extension of polyurethane pultrusion technology will come in residential and low-rise commercial door and window applications during the next two to three years. Large-scale high-rise applications are envisioned as three to five years down the road. (Read more about NFPA 285 testing online in “Better, cheaper screening of FRP building materials” under "Editor's Picks.")

Development work at Deceuninck is targeting all of these areas. The main thrust of this new effort, however, is using polyurethane pultrusion to produce composite primary shapes, not just reinforcement inserts. The company has developed a prototype door sash to replace a sash made from vinyl with a conventional heavy-duty steel reinforcement (see the third photo down, at left). “We’ve done a wide range of testing, and we’re very pleased with its performance,” Morton says, reporting the polyurethane sash actually outperforms the vinyl/steel sash. Morton adds that the company is developing a multi-panel, glass-reinforced door system for a door manufacturer and just completed a primary structural component for a Canadian commercially rated ribbon window system for which the customer is conducting load tests.

Further, Morton says the company has been in discussion with numerous companies about using the polyurethane technology in commercial skylights, as well as “the whole field of commercial windows and doors.”

Whether or not these new applications and opportunities materialize into a full-scale building materials revolution, of course, depends on an array of factors in an admittedly complex industry. Composite materials suppliers and manufacturers, however, have to like their chances in this market, given that one constant, material performance, is innately superior to the alternatives.