Function and operation of aircraft spoilers 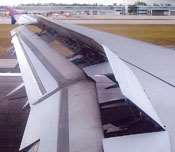 Spoilers are hinged, rectangular plate-like structures installed flush along the top of an aircraft wing, just forward of the flaps. When the pilot activates the spoilers, the plates pivot up on their center hinge fittings into the airstream. As the name suggests, the airflow over the wing is disturbed (spoiled) and lift is decreased. Maximum deployment of the spoiler would be about 50° from the flush position.

The spoiler is a multifunctional flight control surface with three main functions: in-flight airbraking for speed reduction; in-flight roll control (to augment the ailerons in turning); and airbraking on the ground, during lift dumping. The latter dispels the remaining lift as an aircraft touches down on a runway. This increases the efficiency of the wheel brakes by applying the full weight of the aircraft on the wheels.