Von Roll’s (Breitenbach, Switzerland) NEXT GEN core filler is designed to maximize local stiffness and increase strength of honeycomb core in composite sandwich panels while saving weight. According to Von Roll’s internal testing, NEXT GEN core filler’s most important advantages are its long pot and storage life at ambient conditions, and its precise dosability, which the company says makes this product the ideal choice for automated honeycomb potting in aircraft interior applications and other industries.

According to Von Roll, application of filler compounds can be one of the most time-consuming parts of manual sandwich structure construction. The automation of this process can cut production costs by more than 30%, not only by reducing the manual labor hours, but also by reducing material scrap rates while increasing quality and repeatability. The velocity of the robot tool during dispensing of the potting material is limited by the maximum extrusion rate, so a material providing a higher extrusion rate than state-of-art potting resins allows for higher production throughput.

The NEXT GEN core filler can either be dosed and inserted into the honeycomb core manually with a spatula or using high-precision automation with a robot-based metering system. Von Roll says that pairing NEXT GEN core filler with automated potting can result in up to 20% material savings. The company also claims the filler can lead to cost reductions through higher accuracy and repeatability of the potting, which reduces material waste, manual labor in the manufacturing process and non-conformities. 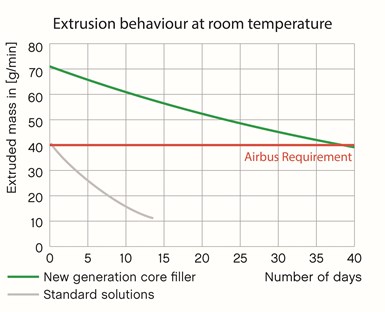 Von Roll says its fillers exclude smell- and volatilization-causing anhydrides, halogens and solvents. Unlike other fillers that consist of two components that need to be mixed before use, NEXT GEN core filler comes in a single component ready for use.

The product’s low density of 0.7 g/cm3 or lower is reported to offer significant weigth reduction benefits. With standard curing temperatures between 125°C and 150°C, the NEXT GEN core filler is said to be compatible with all kinds of curing processes and cycle times of common prepregs for the aircraft interior industry. Furthermore, it is reportedly easy to handle and store, able to be stored up to 5 weeks at room temperature, even in contact with humidity.  In addition, the core filler’s expansion coefficient is near 0 under the influence of heat or load.

In addition, NEXT GEN core filler is compatible with phenolics and epoxies. For example, it is compatible with a new class of Von Roll’s FST compliant prepregs belonging to the EP200 family, which are said to provide the highest mechanical properties and surfacing quality on standard honeycomb cores and can be processed together with the core filler on any kind of honeycomb support.

Two variants of the NEXT GEN core filler are currently available: EP401 and EP411, to offer to the market solutions which are compatible with or without the use of a dedicated press.

This development is compliant with the requirements and regulations of the aviation industry, including all criteria of non-flammability and fire-retardancy properties. Von Roll says it has supplied the NEXT GEN core filler to certified European Tier 1s in the aerospace industry and is working on the product qualification at short notice.

In order to amplify the automated application process, Von Roll has partnered with digital solutions provider Airborne (The Hague, Netherlands) and ViscoTec (Kennesaw, Ga., U.S.), supplier of dosing pumps and dosing systems for medium to high-viscosity fluids, to deliver filling for aircraft interior panels through a one-hand metering system for this product.