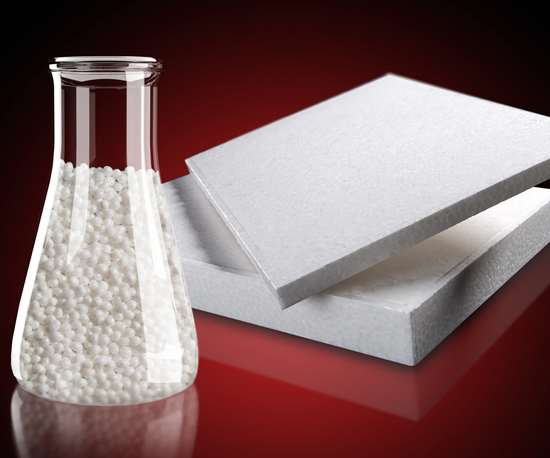 Ultrason is the trade name for BASF’s product range of polyethersulfone (Ultrason E), polysulfone (Ultrason S) and polyphenylsulfone (Ultrason P). The high-performance material is used to manufacture lightweight components in the electronics, automotive and aerospace industries, but also in water-filtration membranes and in parts that come into contact with hot water and food.

BASF (Ludwigshafen, Germany) announced Sept. 19 it has developed prototypes of the world’s first particle foam based on polyethersulfone (PESU). The foam is characterized by high-temperature resistance, inherent flame retardancy and light weight coupled with great stiffness and strength.

According to BASF, Ultrason E, is an amorphous thermoplastic with a high glass transition temperature of 225°C and remains dimensionally stable up to this temperature. Foams made of Ultrason E are approved for use in aircraft. The material, with its high limiting oxygen index of 38 (according to ASTM D 2863), meets the requirements for commercial aircraft with regard to combustibility, low heat release and low smoke density (“fire, smoke, toxicity”) without the addition of flame retardants. The expandable PESU granulate is pre-foamed into beads with low densities between 40 and 120 g/L and can be processed into molded parts with complex 3D geometries.

Despite its low density, the PESU particle foam thus enables stiff and strong components with good dimensional stability at high temperatures. According to BASF it is well suited for complex-shaped components in cars, airplanes and trains, which must be able to withstand high operating temperatures and meet stringent flame-retardant requirements.