Zero-emissions cargo ship to be powered by hydrogen and wind

The ship, to be developed by Norwegian partners along with rotor sail developer Norsepower, is expected to enter service in 2024.
#hydrogen #sustainability #trends

Norwegian Ship Design (Førde, Norway) announced on March 25 that its zero-emissions cargo ship design, said to be the first in the world, will be built and operated by sea transport company Egil Ulvan Rederi (Trondeheim, Norway), which has been awarded a contract by cargo owners HeidelbergCement and Felleskjøpet AGRI.

HeidelbergCement and Felleskjøpet aim to establish a sustainable transport system without emissions from greenhouse gases. Norwegian Ship Design’s concept, named “With Orca – Powered by Nature,” is said to be an emissions-free vessel powered by hydrogen, aided by wind energy through the installation of two large rotor sails developed by Norsepower (Helsinki, Finland. (For more on Norsepower’s composites-intensive mechanical rotor sails, see “Modernizing the mechanical rotor sail.”) The ship will also have a specially developed keel to counter drifting. 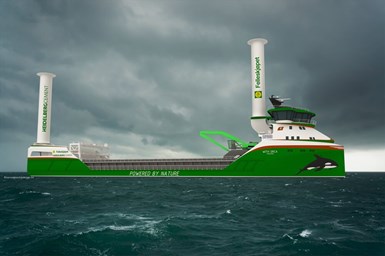 The transport system will combine the cargoes of the two companies, carrying aggregates from western to eastern Norway and grain in the opposite direction. After a six-month selection process facilitated by public-private partnership the Green Shipping Programme, Egil Ulvan Rederi has been selected to develop, build and operate the zero-emission cargo ship.

Egil Ulvan Rederi and Norwegian Ship Design have jointly presented technical solutions with a focus on energy efficiency and thus reduced fuel costs, in several meetings with the cargo owners and experts from DNV.

In 2021, the ship concept will be fully developed and optimized, according to Norwegian Ship Design, and will enter operation in early 2024.

Gjermund Johannessen, CEO of Norwegian Ship Design, says, “As a company we have worked hard to be innovative and leaders in developing bespoke and energy efficient ship designs, as well as in using pioneering new technology. Egil Ulvan Rederi is also forward-looking and has similar ambitions as ship owners. We have a close and fertile relationship, where we see possibilities and find solutions together.”