The Colorado-based startup’s solvolysis-based fiber reclamation process is poised to move into pilot production in partnership with the Colorado School of Mines.
#sustainability #iacmi #outofautoclave 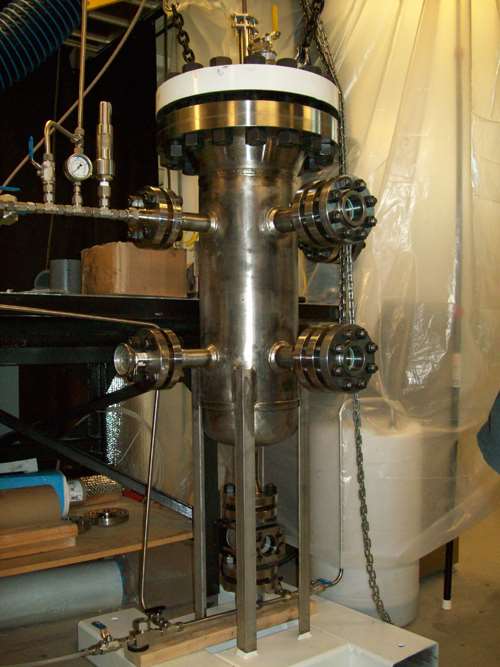 CW was on hand last week at an open house celebration of the recently inaugurated partnership between Vartega Carbon Fiber Recycling LLC (Golden, Colorado) and Golden-based Colorado School of Mines. Vartega, unique among startups in the fast-growing market for reclaimed carbon fiber, has developed a solvolysis, chemistry-based alternative (pat. pend.) to the pyrolysis methods that currently predominate in efforts to reclaim scrap and expired prepregged carbon fiber.

Vartega founder and president Andrew Maxey has been working with Mines associate professor and principal investigator Dr. Jason Porter. Maxey noted that he met Dr. Porter about seven years ago and began working closely with him the past 18 months. In that time, they took Vartega’s alpha process, built (yes!) in Maxey’s garage to proof. Testing conducted at an SGL Carbon SE facility in Evanston, Wyoming, recently confirmed that prepregged carbon fibers reclaimed by Vartega’s solvolysis process retain virgin mechanical properties.

Porter’s experience in the application of optical hardware has been applied to visual verification of the solvolysis process’ capability to produce a clean, residue-free fiber. The implications of these findings are significant, Maxey posited. First, solvolysis can be much less energy intensive, so the process itself, can be less costly in terms of budget and environmental impact. Second, and important for potential customers, the reclaimed fibers can be sold at a lower price than other recycled product, but because those fibers are of virgin quality, a customer will need a smaller fiber volume fraction of solvolysis-processed fibers to secure the same performance one might get with pyrolysis-processed fiber. Therefore, less fiber equals desired performance at even less cost.

That layering of cost savings, says Maxey, is one the most attractive features of the process. A third and key point in Maxey’s presentation was that solvolysis has the potential for more than production of the milled, chopped and short-fiber product typical of current commercial recycling efforts. As Vartega’s process scales up, it can enable reclamation of entire rolls of expired prepregged fabric and tape, preserving the fabric structures, requiring only the reapplication of sizings, where appropriate, to make them available for reuse. Given that waste from cuttings and expired prepregs combined can result in scrap rates as high as 40%, Maxey believes a system that will permit reclamation and reuse of virgin-quality fabrics will meet a longstanding need.

Vartega’s process also has matured to beta stage in a Mines laboratory, funded, in part, by a February Advanced Industry Accelerator (AIA) Proof-of-Concept (POC) grant of US$150,000 from the Colorado Office of Economic Development and International Trade (OEDIT). Open house attendees viewed the beta system, which is capable of batch production on a small scale, during a tour of the Mines laboratory that Vartega will call home base for its R&D efforts for the next several months. Maxey noted that output for the beta system will be put to good use.

Composite industry toolmaker Janicki Industries (Sedro-Woolley, Washington), for one, will use Vartega’s reclaimed fiber to process test panels via infusion and evaluate its properties for permeability, thermal expansion, dimensional stability and machinability. But at a reception following the tour, Maxey emphasized that an over-riding near-term goal is development of a pilot-scale process in 2017, one capable of 100 tons reclaimed fiber output per annum. One key to that endeavor, Maxey noted, is Vartega’s recently acquired senior process engineer Jordan Harris. Experienced in the recycling of polyurethanes and familiar with lab-to-commercial scale-up in the automotive environment, he is expected play a pivotal role in ensuring the process can be integrated into the automotive mass production supply chain.

Maxey and Harris both praised the School of Mines’ openness to such partnerships, which enables startup enterprises open access to sophisticated (not to mention prohibitively expensive) instruments and equipment and technical assistance that would otherwise be out of reach. Another plus of the partnership is the School of Mines' close relationships with the US Department of Energy's National Renewable Energy Laboratory (NREL, Boulder, Colorado), and with the Institute for Advanced Composites Manufacturing Innovation (IACMI, Knoxville, TN, US), the US$259 million public/private consortium designed to accelerate composite materials and process development in key industries, including one of Vartega’s target markets, the auto industry.

Maxey says Vartega is seeking funding for the above, and gave attendees a hint at some possibilities for the future. One of the most intriguing? Pyrolysis processes, Maxey noted, are infrastructure dependent and, therefore, rooted to locations and dependent on transport and associated cost. That is not the case with solvolysis. That, he said, makes Vartega’s process more customer-adaptable, something that will inform Vartega’s mid-range planning.