Source | the University of Maine’s Advanced Structures and Composites Center

The new 3D printer is designed to print objects as long as 100 feet by 22 feet wide by 10 feet high, and can print at 500 pounds per hour. The university reports that the printer will support several initiatives, including development of bio-based feedstocks using cellulose derived from wood resources, and rapid prototyping of civilian, defense and infrastructure applications.

Bio-based feedstocks are recyclable and economical, providing competitive advantages for Maine’s manufacturing industries, including boatbuilding. In 2018, the UMaine Composites Center received $500,000 from the Maine Technology Institute (MTI) to form a technology cluster to help Maine boatbuilders explore how large-scale 3D printing using economical, wood-filled plastics can provide the industry with a competitive advantage. The cluster brings together the expertise of UMaine researchers and marine industry leaders to further develop and commercialize 3D printing to benefit boatbuilders in the state. By 3D printing plastics with 50% wood, boat molds and parts can be produced much faster and are more economical than today’s traditional methods, UMaine says. 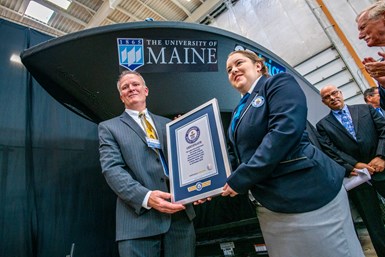 To demonstrate the new printer’s capabilities, UMaine 3D printed a 25-foot patrol boat with a hull form developed by Navatek, a leader in ship design and a UMaine Composites Center industrial partner. The 5,000-pound boat was printed in 72 hours — from Thursday, Sept. 19 to Sunday, Sept. 22. The printer, with both additive and subtractive manufacturing capabilities, enables rapid prototyping for both defense and civilian applications. UMaine also showcased a 3D-printed, 12-foot-long U.S. Army communications shelter. The new printer will support programs with the U.S. Army Combat Capabilities Development Command (CCDC) Soldier Center and its mission to develop rapidly deployable shelter systems for soldiers. Other use areas include concealment applications, structural shelters and high-temperature fire retardant materials for vehicle-mounted shelters.

Working with the U.S. Army Corps of Engineers, UMaine plants to use the 3D printer to produce deployable, low-logistics infrastructure systems, including a 5,000-pound, 21-foot-long 3D-printed mold for a new 76-foot-long composites bridge girder. The girder has been licensed to a UMaine spinoff company, Advanced Infrastructure Technology, that is in the process of fabricating girders for a bridge to be constructed in Hampden, Maine in summer 2020. In addition, rapid production of stay-in-place concrete formwork is reportedly a potential solution for both infrastructure and coastal resiliency construction applications.

“The U.S. Army Corps of Engineers Engineer Research and Development Center (ERDC) is proud of the accomplishments achieved in the long-standing collaboration with University of Maine in military engineering,” says David Horner, director of the ERDC Information Technology Laboratory. “The large 3D printer capability will greatly support research in applications to both military engineering and national civil works infrastructure. This unique facility, along with applications of high-performance computing, will help advance the rapid-prototyping and additive manufacturing capability of DoD.”

“This 3D printer is an outgrowth of research we have been doing for 15 years in combining cellulosic nano and micro fibers with thermoplastic materials,” says Habib Dagher, executive director of UMaine’s Advanced Structures and Composites Center. “Our goal is to print with 50% wood products at 500 pounds per hour, and achieve properties similar to aluminum. We thank our congressional delegation for their support.”