Toray will build in South Carolina a 2,000-ton-capacity plant that integrates precursor, carbon fiber and prepreg production for the Boeing 787 and 777X.
#777x #787 #boeing 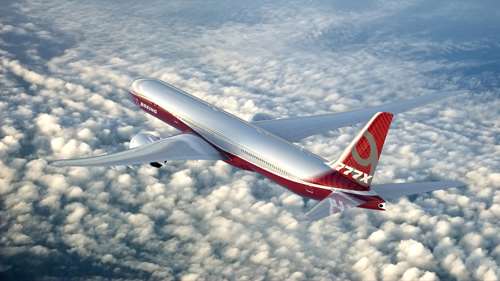 Toray Industries Inc. (Tokyo, Japan) announced on Nov. 9 that it has signed a comprehensive long-term agreement with The Boeing Co. (Seattle, WA, US) to supply carbon fiber TORAYCA prepreg for the production of the new Boeing 777X aircraft, extending the existing supply agreement for the Boeing 787 Dreamliner.

The new agreement extends the comprehensive agreement that was signed in November 2005 by more than 10 years from this year. The total value of prepreg Toray Group will supply for both 787 and 777X programs for the contract period is expected to exceed ¥1.3 trillion ($11 billion).

Together with the extension, Toray has made a decision to invest approximately ¥50 billion in new construction of an integrated production line for precursor and high-performance carbon fiber TORAYCA with an annual production capacity of 2,000 tons, and TORAYCA prepreg in the new commercial premises it acquired in Spartanburg County, SC, US. It represents the first phase of a planned ¥100 billion investment, as Toray seeks to expand its composite materials business in the U.S. The new facility will also be Toray’s first integrated production line for precursor, carbon fiber TORAYCA and TORAYCA prepreg in the U.S.

Toray will commence production of precursor in phases starting in May 2017, and plans to begin supplying TORAYCA prepreg to Boeing in 2019, following certification. As for the 787, TORAYCA prepreg has been used since the beginning for some of the primary structural materials, including the main wings and body. With Boeing planning to increase the number of 787 aircraft being produced every month from the current 10 planes to 12 per month in 2016, and 14 per month by the end of the decade, and the ratio of larger models also expected to increase, the demand for carbon fiber composite materials also is expected to increase significantly.

The 777X aircraft is a twin-engine passenger aircraft being developed by Boeing as a successor to the existing 777, with a plan to deliver the first plane in 2020. With the conclusion of the agreement announced today, Toray’s TORAYCA prepreg has been officially selected for 777X main wings.

Preparing for the planned 787 production increase to 12 planes a month, Toray has already been working to expand TORAYCA prepreg production facilities at its U.S. subsidiary, Toray Composites (America) Inc. (Tacoma, WA, US), and the new facilities there are expected to start operation in January 2016. The integrated production line to be constructed in Spartanburg County is intended to meet growing demand generated by Boeing’s plan to increase production of 787 aircraft to 14 per month as well as the 777X program.

The new facility will position Toray to provide Boeing with a stable supply of products. Toray plans to expand the production facilities in Spartanburg County as shipments for the 787 and 777X aircraft grow. Toray says it is aiming to drive an exponential increase in aerospace applications in the composite materials business under its new medium-term management program Project AP-G 2016, which was launched in April 2014. Toray will continue to expand its infrastructure to ensure a stable supply of TORAYCA prepreg in line with Boeing’s plan to increase output, while increasing the sophistication of its composite materials business in the U.S. as revenues grow.