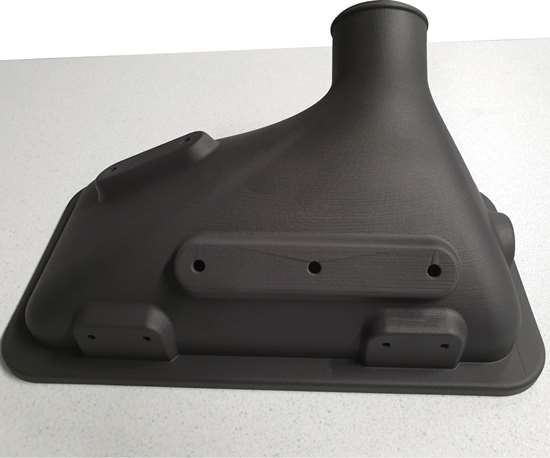 Scheurer Swiss GmbH (Volketswil, Switzerland) has been commissioned to manufacture 3D-printed carbon fiber-reinforced engine components for the latest generation of the Castrol Toyota racing series. The design for the Toyota FT-60, presented by Toyota Gazoo Racing New Zealand, is based on a regional Formula 3 Tatuus chassis, which is powered by a 2-Liter Turbo 8AR FTS engine. The engine, which is a racing version of the 8AR FTS engine used in Toyota and Lexus road vehicles, is capable of producing 285 horsepower.

Scheurer Swiss GmbH says it produced the engine parts on behalf of New Zealand-based companies David Gouk Race Engines and Häberlin Composites. The 3D-printed, carbon fiber-reinforced components used for the test series of the FT-60 were said to be characterized by lightweight, precision, stability and the ability to manufacture them in a short period of time.

According to David Gouk of David Gouk Race Engines, the texture and material in the tests were not only visually convincing, but also withstood the enormous speed and heat as well as the compressive forces on the race track. “We are planning to go into series production soon with the 3D-printed carbon-reinforced engine components from Scheurer Swiss,” says Gouk.

Dominik Scheurer, CEO of Scheurer Swiss GmbH, says that the components can also be used for industrial applications in the automotive sector.

The new racing car first hit the track in Italy in July, though its race debut will be in 2020. Formula 2 and European Le Mans Series driver, Arjun Maini, completed 900 kilometers in the Toyota FT-60, spread over three different tracks.

“It was a very positive first test,” said Maini, who finished fourth in the 2015 TRS season with the previous FT-50 race car. “The new engine ran very smoothly, it is powerful and the handling very good. Gear changes and downshifts also feel very good in combination with the new engine.”

Other Scheurer Swiss GmbH projects that CW has covered include components for an under-development Mars rover chassis and parts for a racing catamaran.