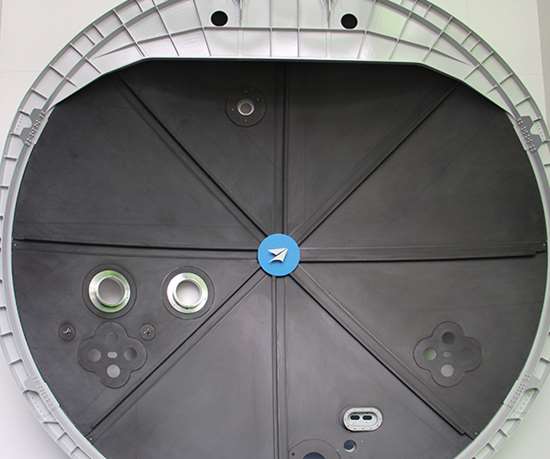 The demonstrator displayed at the Paris Air Show 2019 is the second generation of the thermoplastic welded pressure bulkhead for a single-aisle jetliner. Its predecessor was premiered at ILA 2018 in Berlin. The 1:1 demonstrator for a plane in the Airbus A320 series was built from eight equally-sized thermoplastic carbon fiber-reinforced plastic (CFRP) components joined together using state-of-the-art resistance welding technology. Development and design was completed by Premium AEROTEC (Augsburg, Germany) with thermoforming of the eight carbon fiber/polyphenylene sulfide (CF/PPS) segments completed by the Institute for Composite Materials (IVW, Kaiserslautern, Germany). These segments were joined together using electrical resistance welding by the Center for Lightweight-Construction-Technology (ZLP) at DLR (Augsburg, Germany).

In collaboration with its partners, Premium AEROTEC is demonstrating its skill in developing and producing large thermoplastic CFRP aircraft components and significantly expanding use of this material in aircraft fuselage shells. The company draws on years of experience in using thermoplastic composites to manufacture smaller components for the A350 XWB such as clips connecting CFRP frames to CFRP skin sections. Premium AEROTEC manufactures over 2,000 such clips per aircraft using a highly automated process.

In comparison to the current traditional pressure bulkhead for the A320 product family, made of riveted aluminum components, the thermoplastic CFRP version reportedly offers the same mechanical properties but with a 10-15% weight savings, and a roughly 50% reduction in production time which cuts manufacturing costs. The thermoplastic pressure bulkhead reportedly offers all the characteristics needed for a next-generation aircraft.

Because of the machinery and systems involved, the process of heating, shaping and cooling pre-impregnated thermoplastic CFRP semi-finished products (prepegs) was previously difficult to apply to large-scale aircraft components. In addition to introducing it into serial production for the A350 XWB, Premium AEROTEC was also working on making this technology usable for larger components such as integral frames. The demonstrator exhibited at the 2019 Paris Air Show enables the company to demonstrate that this technology can also be used for major components in the primary structure. The full-scale demonstrator, displayed in mounting conditions, exhibits a degree of technical maturity far beyond the concept phase — laying a significant foundation for the next generation of CFRP aircraft fuselage shells.