CW’s monthly roundup of people on the move in the composites industry.
#iacmi #sustainability 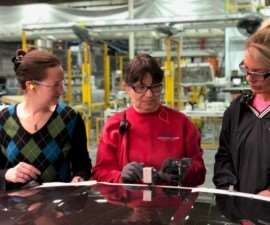 Continental Structural Plastics (CSP, Auburn Hills, MI, US), a world leader in vehicle lightweighting technologies, announced April 23 the promotion of Karen Williams to plant manager of the Huntington, ID, US manufacturing facility.  Williams becomes the first female to be named to a plant management position in the company’s more than 50 years in operations.

As plant manager, Williams will oversee all operational aspects of the 340,000 ft2 Huntington manufacturing facility.  The Huntington plant, which recently underwent a significant expansion to support future customer programs, currently employs approximately 400 hourly and salaried employees.  The facility manufactures Class A Body Panels for the GM Corvette, the Ford Raptor and the Lincoln Navigator. The Huntington has recently been in composites news as it is the facility where carbon fiber beds for the 2019 GMC Sierra Denali pickups are being made.

“Karen brings extensive experience to this position, having been in the automotive industry for 20 years and the composites business for the past 12 years,” says Jerry Reid, regional operations director for CSP.

Williams, who joined CSP in 2010, most recently served as the corporate quality manager. In this position she was the primary point of contact for product quality related to launches across multiple CSP facilities.

“Karen has demonstrated both the capacity and the leadership qualities needed to excel at CSP,” says Steve Rooney, CSP CEO.  “She played a significant role in taking the Huntington plant from a brownfield site to a premier supplier of automotive exterior body panels.”

Williams holds her MBA from Indiana University and a B.S. in Mechanical Engineering from Kettering University.

Mafic Shelby Facility is scheduled to be open for the start of the Third Quarter this year where Mafic will be producing high-quality Basalt Fibers. The Shelby facility will grow to a run rate of 6,000 tons per year of basalt fiber materials and Mafic is excited by the increasing support of basalt fiber materials across the composites industry. Mafic will be hiring 100+ new employees for their facility, please reach out to Mafic at Info@mafic.com if you are interested to join their growing team.

Meagan Sloan and Miloš Lazić are responsible for providing expert technical assistance and guidance to Indium Corporation’s customers and potential customers in the Americas to resolve soldering process related issues.

Prior to joining Indium Corporation, Sloan served as a laboratory technician at Anoplate, an electroplating company that serves the aerospace, computer, and defense industries. Before that she was a laboratory assistant at Syracuse University, where she prepared and wrote experiments for students, and managed and ordered materials for inventory. Sloan has a bachelor’s degree in Chemistry, with a concentration in pre-engineering from LeMoyne College, and a master’s degree in Chemical Engineering from Syracuse University. Her advanced coursework includes advanced organic chemistry, inorganic chemistry, physical chemistry, instrumental chemistry, chemical reaction engineering and engineering materials.

Lazić previously worked at Radio-Television Nis in Serbia, where he held the position of deputy technical director. He also served as an electrical engineer for Montelektro, where he designed electrical installations for industrial, commercial and residential applications. He co-founded, “Urban Youth Forum,” a non-profit organization designed to help primary and high school students plan, develop and execute projects that recycle electronic waste. Lazić earned his bachelor’s degree in Electrical Engineering and his Master of Engineering in Electronics Engineering from the University of Nis, in Serbia. He also earned the title of Energy Efficiency Engineer by passing the proficiency exam of the Serbian Chamber of Engineers in Belgrade.

IACMI (Knoxville, TN, US), a national manufacturing innovation institute with more than 150 members, announced April 2 the promotion of two senior leaders within the organization.

Robin Parton Pate has been named chief operating officer and Erin Brophy is now serving as Program Director for the institute. Ms. Pate is filling the role previously vacated by Dr. Renae Speck, who served the institute for three years as a loaned executive. Ms. Brophy’s position is a newly created role with oversight responsibility for the program, including comprehensive institute-wide reporting and project management. Both appointments are effective as of April 2018 and are the result of shifting organizational leadership needs and excellent performance within their previous roles.