More than 600,000 square meters in total of the company’s fire-retardant glass and carbon fiber prepregs were used to build the Museum’s facade panels.
#infrastructure

Notus Composites (Ras Al Khaimah, United Arab Emirates) announced on Jan. 11 that it has completed the final shipment of its fire-retardant (FR) epoxy prepregs to Dubai for use in the construction of the Museum of the Future (read “Building the Museum of the Future” for a more in-depth look at the design and manufacture of the museum’s composite facade).

The complex, composites-intensive Museum of the Future, designed by architectural firm Killa Design, was unveiled in a virtual ceremony on Dec. 2, 2020, culminating a two-year build program. It is expected to open this year.

Notus Composites worked with the Museum’s façade manufacturers, Affan Innovative Structures (Dubai) and Nova Composites (Dubai), to provide the composite materials for the Museum’s 1,024 exterior cladding panels, which have been built from a combination of Notus’ multiaxial glass and carbon prepregs. These EPFR-609 prepregs and NE11FR surfacing films are designed for fire performance and have been approved by the Dubai Civil Defence (DCD), Notus says. To date, the company says it has supplied more than 600,000 square meters of prepreg materials for the building’s façade panels. 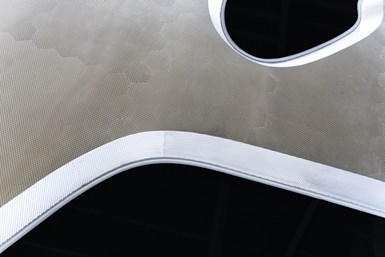 Each of the Museum’s panels is unique in shape, with Arabic calligraphy molded into each individual panel and the black letters also forming the glazed window penetrations in the façade. To build the panels, Notus’ multiaxial prepregs were laminated in CNC milled molds at Affan’s and Nova’s factories in Dubai, before glazing elements, LED lighting systems and stainless steel surface finishes were added, and the panels delivered to site for installation.

Mihir Shah, managing director of Notus Composites, comments, “It has been a fantastic opportunity to work on the Museum of the Future. We’ve come such a long way since 2015, and are now supplying into some of the largest and most complex composite construction projects in the Middle East. It’s great to see our investment in testing and development being successful, as our clients continue to deliver ever larger FR composite structures.”

In addition to the Museum of the Future project, Notus Composites says its epoxy prepregs, which have been tested and certified to key architectural standards such as the NFPA 285 test, ASTM E84 and EN13501-1, are also being used for projects such as the flagship Rolex Store in the Dubai Mall, carbon fiber palm tree shading at the Nakheel Mall, numerous EXPO 2020 pavilions and a showpiece chandelier for a five-star hotel in Dubai.