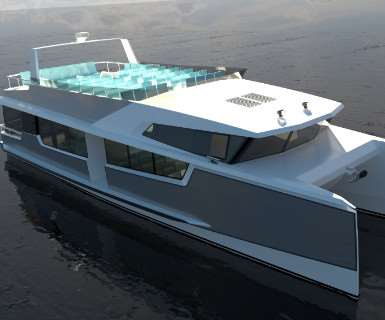 The venture’s new 18.5m ferry for a New Zealand-based operator will reportedly utilize electricity generated entirely from renewable sources. Engineered by Gurit APAC (Auckland, New Zealand), the vessel will be constructed using carbon fiber and foam, and assembled from CNC-cut infused panels, with only the lower hulls being molded. The carbon/foam construction is said to enable a structural weight reduction which makes the electrical propulsion system viable. In addition, the canoe-stern hull form is said to reduce resistance, allowing the weight of batteries to be minimized.

According to Stimson, the vessel will operate at 20 knots service speed, running at the rush-hour peak three back-to-back 25-minute runs with 5-minute dip charges at one side only before a 1 hour recharge is required.

This story is a corrected version of a story that appeared in CW Today newsletter on Dec. 3, 2018.