The wing, comprising a lattice of injection-molded, configurable polymer subassemblies, is designed to change shape during flight.
#windblades #infrastructure 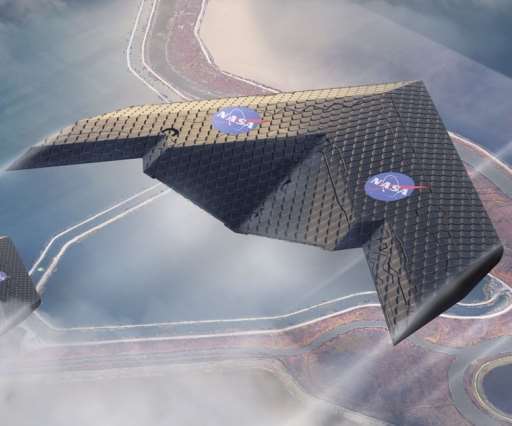 A team of engineers from NASA’s Ames Research Center (Moutain View, Calif., U.S.) and the Massachussetts Institute of Technology (MIT, Cambridge, Mass., U.S.) have built and tested an airplane wing assembled from a lattice comprising hundreds of tiny identical polymer pieces. The wing reportedly can change shape to control the plane’s flight.

The wing design was tested in a NASA wind tunnel and is described in a paper in the journal Smart Materials and Structures, co-authored by research engineer Nicholas Cramer at NASA Ames in California; NASA Ames engineer and MIT alumnus Kenneth Cheung; MIT graduate student Benjamin Jenett and eight others.

Instead of requiring separate movable surfaces such as ailerons to control the roll and pitch of the plane, as conventional wings do, the new assembly system makes it possible to deform the whole wing, or parts of it, by incorporating a mix of stiff and flexible components in its structure. The tiny subassemblies, which are bolted together to form an open, lightweight lattice framework, are then covered with a thin layer of similar polymer material as the framework.

The result is a wing that is lighter, and thus more energy-efficient, than those with conventional designs, whether made from metal or composites, the researchers say. Because the structure, comprising thousands of tiny triangles of matchstick-like struts, is composed mostly of empty space, it forms a mechanical “metamaterial” that combines the structural stiffness of a rubber-like polymer and the extreme lightness and low density of an aerogel.

Jenett explains that there is a different set of optimal wing parameters for each phase of flight, to provide a better approximation of the best configuration for each stage. The system is designed to automatically respond to changes in its aerodynamic loading conditions by shifting its shape in specific ways.

A meter-long demonstrator wing was created by Cheung and other team members a few years ago. The new version, about five times as long, is comparable in size to the wing of a real single-seater plane and is designed to be easily accomplished by autonomous assembly robots. The design and testing of the robotic assembly system is the subject of an upcoming paper, Jenett says.

The individual parts for the previous wing were cut using a waterjet system, and it took several minutes to make each part, Jenett says. The new system uses injection molding with polyethylene resin in a complex 3D mold, and produces each part — essentially a hollow cube made up of matchstick-size struts along each edge — in just 17 seconds, he says, which brings it much closer to scalable production levels.

“Now we have a manufacturing method,” he says. While there’s an upfront investment in tooling, once that’s done, “the parts are cheap,” he says. “We have boxes and boxes of them, all the same.”

The same system could be used to make other structures as well, Jenett says, including the wing-like blades of wind turbines, where the ability to do on-site assembly could avoid the problems of transporting ever-longer blades. Similar assemblies are being developed to build space structures, and could eventually be used for bridges and other high-performance structures.