In aerospace, as well as in the automotive industry and in the development and production of rail vehicles, lightweight construction has been an issue for decades — every weight saving reduces emissions and thus also costs when flying into space, traveling through the troposphere or even just getting to work. And whether it is a spaceship or a regional train, the demands on robustness, safety and reliability of the materials are very high and subject to strict specifications. Fiber-reinforced composites also have special damage-mechanical characteristics due to their multilayer and complex structure. 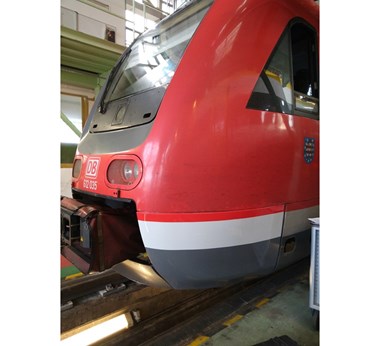 INVENT piezo-ceramic networks were integrated into composite side skirts and tested for seven months on a Deutsche Bahn regional train as part of the faWaSiS project. Photo Credit: Voith Turbo GmbH

But how can the condition of components in use actually be checked? INVENT GmbH (Braunschweig, Germany), together with six partners, has investigated this question with a view to rail transport and developed an integrated, sensor-based diagnostic system in the joint project faWaSiS. This system can significantly reduce the mass of trains by using composite materials more effectively and at the same time detect material damage at an early stage. The key is the use of piezoceramic area transducers.

Structural health monitoring (SHM) aptly sums up what the faWaSiS research project is all about, explains Friedrich von Dungern, head of research & development at INVENT GmbH: “Figuratively speaking, we took a look at the health of a certain lightweight component, specifically the so-called side skirt of a regional train operated by Deutsche Bahn. The side skirt is located below the driver's cab on the right and left in the front area of the train and is exposed to particular loads, from sudden stone impacts from the trackbed to collisions with wild animals or branches. Moreover, despite its non-structural nature, it is a particularly intriguing and relevant research object for the scientists and engineers involved, as such an exposed structure generates a lot of data for evaluation and further development. The focus at faWaSiS was on material selection, design, manufacturing method and component integration.” INVENT GmbH designed, developed and manufactured the copper-shielded integrable network module for the inside of the side skirt as well as the connection components. This was based on preliminary work such as component analysis and calculations by the Institute of Composite Structures and Adaptive Systems of the German Aerospace Center (DLR, Braunschweig, Germany). Another project partner (SMT Forst) integrated the network into the manufacturing process of the side skirt, producing the final demonstrators for the field test. “We manufactured a total of three structural monitoring networks and one trade show demonstrator,” explains Jesper de Wit, faWaSiS project manager at INVENT. The seven-month field test with two of the three side skirts in a Deutsche Bahn regional train showed that the network also works successfully in practice. Two side skirts were installed to cover both directions of travel of the train.

We have demonstrated that the integrated network detects damage at an early stage and actively indicates necessary repair measures.

“We have thus demonstrated in theory and practice that the integrated network detects damage at an early stage and actively indicates necessary repair measures,” says INVENT division manager Friedrich von Dungern. The fact that this is possible is due to the piezoelectric transducer networks, which are based on DuraAct technology. 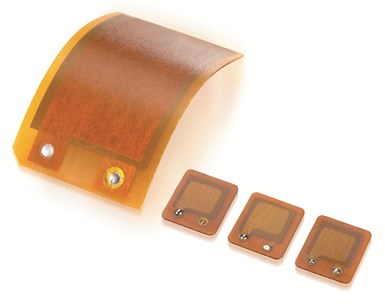 DuraAct patch transducers work both as sensors with variable bandwidth which react to mechanical deformation such as impacts, bending or pressure, and as high-precision controlling elements or bending actuators. Photo Credit: piceramic.com

This technology is patented by DLR and has been industrialized by INVENT GmbH, which installed 32 of the piezo-ceramic sensors in each faWaSiS network. These can excite and receive Lamb waves that move through solid plates and shell structures. A transformation of the waves takes place where there are defects, which can be sensed and used for damage detection by means of complex algorithms. This damage detection capability is being tested in applications including structural health monitoring of thin-walled composites in commercial aircraft.

INVENT claims that piezo-ceramic transducers are ideal for damage detection, damage localization and damage assessment due to their electro-physical properties and ability to cover a wide frequency range with low electrical power consumption in the µW range. “The acceptance of modern, lightweight construction technologies on the railways is to be increased step by step and the possibilities of piezoelectric area transducers are to be made known in a new market segment,” says von Dungern.

The faWaSiS research project was funded by the German Federal Ministry for Economic Affairs and Energy (BMWi) under grant number 19|17004. The project sponsor was TÜV Rheinland.

As a recognized lightweight specialist for innovative fiber composite technologies in the aerospace, mechanical engineering, automotive, rail and shipbuilding sectors, INVENT GmbH has been developing and producing high-precision structural components since 1996 as an EN 9100 and Nadcap certified company, from concept to series production. Our own designers and constructors work very closely with a wide range of manufacturing specialists. From a single source, we offer a complete service spanning design, production planning, manufacturing processes, mechanical processing, joining and assembly as well as painting and quality control.