The 2,000-MW project is part of the 150 initiatives presented for Spanish industrial and employment transformation. Could generate 2,800+ jobs/year, involve 52 Spanish SMEs, with €1 billion investment.

Iberdrola (Bilbao, Spain), a global energy leader, is planning what is said will be the first industrial scale floating offshore wind farm in Spain, to which it would allocate more than €1 billion of investment to commission 300 megawatts (MW) of clean energy off the Spanish coast. The project represents an opportunity to develop the country's supply chain and establish Spanish industry as an international benchmark. It has been submitted to the Next Generation EU (NGEU) program and is aligned with the pillars of the Spanish government's Recovery, Transformation and Resilience Plan.

According to Iberdrola, the renewable facility will become a hub for the country’s industrial transformation and job creation. The study, design and engineering, which could begin as early as this year, could potentially generate more than 2,800 jobs per year until it becomes operational in 2026. Iberdrola says the project, if accepted by the NGEU, would require the participation of 66 Spanish companies and technology centers, including 52 small and medium-sized enterprises (SMEs). In the short term, the initiative could generate between 1,000 and 2,000 jobs during 2021-2022, before the start of the construction phase. In the long term, the project could save 202,500 tonnes of carbon emissions per year. 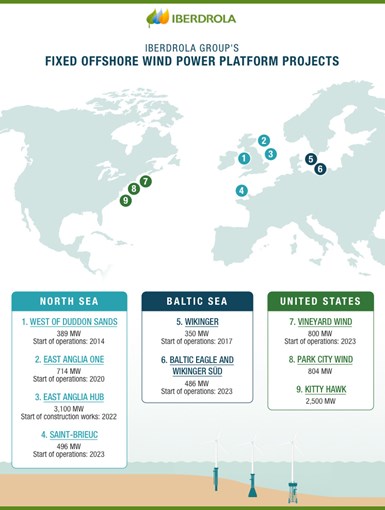 Iberdrola’s pioneering project plans to spearhead the development of up to 2,000 MW of floating offshore wind projects identified by the company off the coasts of Galicia, Andalusia and the Canary Islands.

The project is one of 150 initiatives submitted by the company to the NGEU program — in the fields of heat electrification, floating offshore wind, sustainable mobility, green hydrogen, innovative renewables, smart grids, circular economy and energy storage — that would mobilize investments of €21 billion and involve hundreds of SMEs.

In all, these 150 initiatives have the potential to generate 45,000 jobs/year, generate economic growth of more than 1.5% of GDP, improve competitiveness and the balance of payment — between €500 and €1 billion per year — and contribute to the demographic challenge, as they include more than €7 billion in rural areas.

In addition, Iberdrola is deploying an investment plan of €14.3 billion by 2025 in Spain, as part of a growth strategy that will lead it to invest €75 billion worldwide.

Iberdrola has become an international benchmark in the offshore wind industry and has one of the largest offshore wind pipelines in the market, amounting to more than 30 gigiwatts (GW).

The company operates wind farms in the German Baltic Sea (Wikinger and Baltic Eagle), the North Sea (East Anglia ONE) and the Irish Sea (West of Duddon Sands). It is also making progress in the Vineyard Wind ONE (800 MW off the coast of Massachusetts), Park City Wind (with a capacity of 804 MW) and Kitty Hawk (Virginia) projects, through Vineyard Wind- and in the Saint Brieuc wind farm off the French coast.

In recent months, it has also gained access to an early-stage pipeline in new markets, which will become growth platforms, such as Sweden, Japan, Poland and Ireland. In Denmark, Iberdrola has recently agreed to participate with Total in the country's upcoming auction for the Thor offshore wind farm (1 GW).

By 2025, Iberdrola expects to reach 60 GW of installed renewable capacity worldwide, of which 4 GW will be offshore wind.