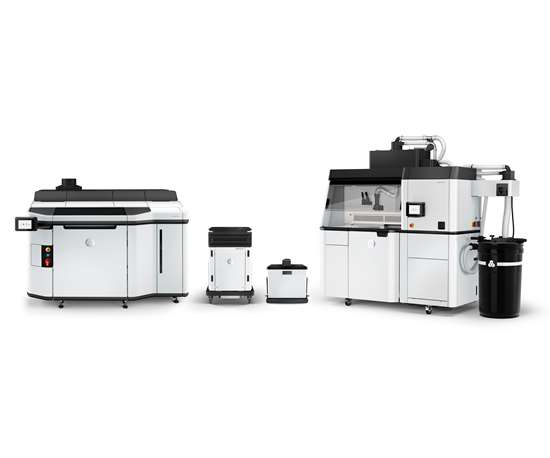 HP has expanded its materials range with an elastomeric TPU powder from BASF, used in this bike helmet from Kupol. (Photo: Kupol)

•  HP’s latest entry in 3D printers for mid-volume production of plastic parts (over 200/week) is its Jet Fusion 5200 Series, said to provide greater manufacturing predictability, efficiency, repeatability and quality than ever before. It also boasts up to 40% higher productivity and up to 30% lower operating costs. It has the same build volume and layer resolution as the earlier 4200 Series, but the build speed is 23% higher. Like the 4200 Series, the 5200 Series is said to be competitive with injection molding for runs of more than 100,000 small parts and up to 5000 to 10,000 larger parts. The Model 5200 is designed for serial production of up to 800 parts/week and the 5210 is more economical for greater volume needs. The 5210 benefits from larger material supply containers, faster scanner calibration, and indicator lights to show machine status at a distance. Both models are available now.

The 5200 series reportedly gains greater production efficiency from a change from the former two-pass mode to one pass, and from the introduction of new “natural cooling” accessories that mount on top of the build module. Now, hot parts no longer have to cool inside the build module, which can take hours, but are automatically transferred to the new cooling module, freeing up the build module for another run. The new one-pass mode reportedly will be even more important in the future to allow fusion of engineering thermoplastics at much higher temperatures.

The 5200 Series also boasts “industrial-level OEE” (overall equipment efficiency) greater than 80%, stemming from a “breakthrough” in uptime, and “injection-molding-grade” accuracy and repeatability on all three axes, yielding a Cpk of 1.3 which HP says is “unheard of today in 3D printing.” HP credits newly developed “preventive-maintenance intelligence” and automated machine learning for tighter process control and self-optimizing performance that “gets better over time.” Also, a new thermal camera inside the machine that monitors the process has 5X finer resolution than the one on the 4200 Series. New HP 3D Center software helps track, manage, and optimize operation of multiple printers. New HP 3D Parts Assessment service performs an economic analysis and optimization of part designs for 3D printing.

•  At the end of this year, a new elastomeric TPU material will become generally available for the 5200 Series. Ultrasint 3D TPU01 powder from BASF is aimed at flexibility and shock absorption in automotive, consumer, and industrial products. Early applications include a bike helmet from Kupol of Montreal (pictured), a wind-turbine blade clamp from Vestas of Denmark, and a code-wheel cover for HP textile and large-format printers.

•  In order to provide an “end-to-end additive-manufacturing (AM) solution,” HP has deepened its AM alliance with Siemens of Germany to integrate HP’s 3D printing and data intelligence platform, including the new 5200 Series, with Siemens’ Digital Enterprise software portfolio. That includes Siemens’ NX CAD/CAE, an NX AM for HP Multi Jet Fusion module with direct printer interface (undergoing certification by HP for the 5200 Series), Teamcenter for product lifecycle management (PLM), Tecnomatix Plant Simulation, Simatic IT for MES, and MindSphere for performance analytics and industrial IoT (internet of things, aka Industry 4.0).