The first manufactured nacelle of the Haliade-X 12-megawatt offshore wind turbine will be tested on a prototype in Rotterdam, Netherlands.
#gerenewable #windblades

GE Renewable Energy (Paris, France) revealed the first nacelle for the Haliade-X 12-megawatt offshore wind turbine on July 22, at its production site in Saint-Nazaire, France. GE says this is a step towards launching the Haliade-X, which is currently a prototype under construction in the Netherlands, to the market in 2021.

The revealed nacelle will be shipped from Saint-Nazaire to Rotterdam-Maasvlakte in the Netherlands over the next several weeks, where its components will be assembled into the Haliade-X 12-megawatt prototype to be tested there. The prototype will be installed on land to simplify access for testing. This initial phase is designed to allow GE Renewable Energy to obtain the data required to receive its type certification prior to commercialization. 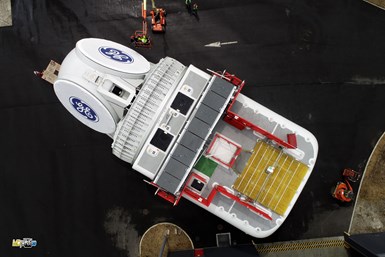 A second Haliade-X nacelle is currently being assembled at Saint-Nazaire, and is expected to be sent to the ORE Catapult test center at Blyth, U.K., in the next few months. The nacelle will be testing in actual operational conditions to reduce the time required to confirm its performance levels and reliability.

The Haliade-X’s nacelle and 107-meter-long blades are designed for more effective power generation for customers. The turbine is said to generate 67 gigawatt hours in gross annual energy.

“This project clearly reflects our ability to invest and innovate, supporting our customers on an ultra-competitive market in exponential growth,” says Jérôme Pécresse, CEO of GE Renewable Energy.  “Thanks to the Haliade-X 12 MW, we are proud to prepare for the future of the offshore wind industry from Saint-Nazaire, a benchmark production site for offshore wind international projects.”

“We are on track to start commercializing this new product very shortly. Once we have received the type certificate (2020), we will be ready to start mass production and send out the first commercial units by mid-2021,” says John Lavelle, CEO of GE Renewable Energy Offshore Wind. “Haliade-X 12MW is an outstanding and strategic project for GE. We aim to meet the requirements of our customers by providing a more affordable and competitive energy source.”