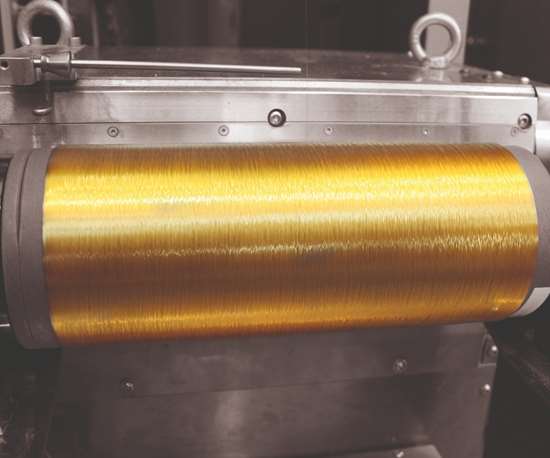 PAN fiber precursor material for the production of carbon fibers.

The Fraunhofer Institute for Applied Polymer Research (IAP, Potsdam-Golm, Germany) has announced it will present its ComCarbon technology at the leading aerospace trade fair, the ILA Berlin 2018 in Germany, from April 25-29. The new technology will reportedly make it possible to produce carbon fibers at low cost for the mass market.

About half the cost of producing conventional carbon fibers is incurred in producing the precursor, the polyacrylonitrile fiber (PAN). This so-called precursor fiber cannot be melted and is therefore produced using an expensive solution spinning process.

“We have developed an alternative PAN-based precursor technology that saves around 60% of the precursor costs. It is based on an inexpensive melt spin process using special, meltable PAN co-polymers that we developed especially for this purpose,” explains Prof. Johannes Ganster, who heads the Biopolymers research division at the Fraunhofer IAP.

There are several reasons why melt spinning has an economic and ecological advantage over solution spinning. For one thing, it does not use any environmentally harmful solvents that have to be recycled at great expense. Eliminating solvents means that 100% of the melted material can be spun, which enables reportedly significantly higher spinning speeds.