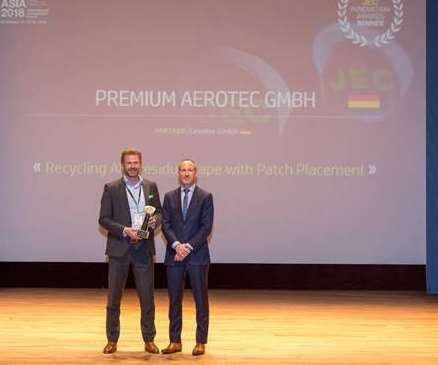 Premium Aerotec teamed up with Cevotec to improve material utilization and reduce the overall cost of a pressure cap with a complex geometry. The project employed Cevotec’s SAMBA Series prepreg production system.

“With SAMBA Prepreg production cells, adjusted for processing ½ inch wide thermoset prepreg tape, we effectively ‘recycle’ the residual AFP tape [left over in typical AFP production processes],” says  Felix Michl, CTO at Cevotec. “SAMBA also enables us to manufacture the specific part that Premium Aerotec had in mind: a pressure cap with a complex, double-curved shape and a circumferential flange for rivets so complex that regular fabrics could not be draped to achieve the desired geometry.”

According to Cevotec, designing and manufacturing the OP-box with FPP technology, using the residual AFP tape cut the part’s weight by 70%. The recurring costs reportedly could be decreased by 75% while the cost reduction thanks to the repurposing of the material could be around 88%.