Airborne delivers solar array substrate panels for use in the European Space Agency’s mission to explore the icy moons of Jupiter.

Airborne (The Hague, Netherlands) has delivered the last 4 out of 10 XL substrate panels to Airbus Defence and Space Netherlands (Leiden, Netherlands) for use in the solar array of European Space Agency’s (ESA) JUICE mission to Jupiter.

The JUICE (JUpiter ICy moons Explorer) is an interplanetary spacecraft in development by the ESA with Airbus Defence and Space Netherlands as the main contractor. The mission will study Jupiter’s moons Ganymede, Callisto and Europa.

Given extreme distance from the Sun, the JUICE spacecraft requires an exceptionally large solar array in order to generate sufficient power. Airborne was selected by Airbus Defence and Space Netherlands to develop and manufacture the XL substrate panels for JUICE’s solar array. With a total surface area of 85 square meters, the satellite will be equipped with the largest solar array ever flown on an interplanetary mission. Each individual panel has a surface area of 9 square meters.​ To enable production Airborne modified the manufacturing equipment, including extending the maximum inside diameter of the autoclave from 2.6 to 2.9 meters. 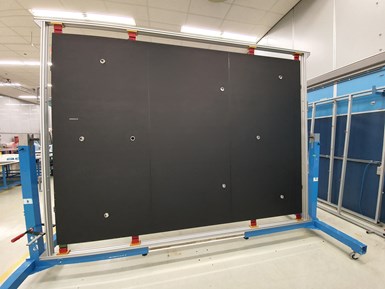 JUICE’s solar array is built with the new ARA Mk4 technology, which has been developed and qualified by Airbus Defence and Space Netherlands in close cooperation with Airborne. The technology allows for 20% cost reduction and increases the robustness of the solar array by expanding the temperature range and adding stiffness. As the satellite will be exposed to extreme conditions during the full length of the mission, the panels need to withstand temperatures as low as -240°C, as well as space radiation.

The substrate panel features the next generation of space prepregs developed by Toray Advanced Composites (previously TenCate Advanced Composites, Morgan Hill, Calif., U.S.), which, according to Toray, are used on areas including the facesheets, edge-members and patches. Toray RS-36, an epoxy-based thermoset prepreg for structural composite applications was selected as the material solution for ARA Mk4.

The extreme temperatures to which the satellite will be exposed near Jupiter made additional qualification necessary on the panel design and its interfaces. Airborne manufactured 160 qualification test samples and two full-size panels which were delivered in January 2017. After an intensive testing campaign by Airbus Defence and Space Netherlands, Airborne manufactured a total of 10 substrate panels. The last 4 panels were completed in October 2019. Launch of the JUICE mission is planned for 2022.

Arno van Mourik, CEO of Airborne says, “JUICE is a great example of what we can do in terms of state-of-the-art substrate panel technology for solar arrays of extremely demanding space missions. Building on this position we are determined to move forward in the domain of affordable space panels for new space. Combining our knowledge on high end substrates with our capabilities in the domain of industrialization of composites will allow us to provide the new space market with high performance, yet radically affordable solutions in high volumes.”

In August 2019, SGL Carbon (Wiesbaden, Germany) began delivering two special glass fiber noncrimp fabrics for the new version of Airbus Helicopters’ (Marignane, France) model H145. The materials are used in the new helicopter’s five-blade rotor. Developed in close collaboration with Airbus Helicopters, the material has been qualified for the application for the foreseeable future. 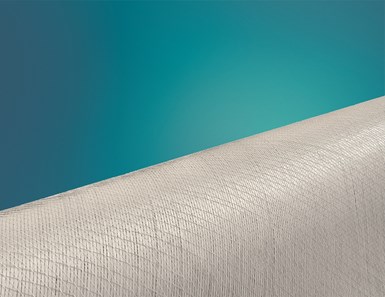 Because of their unidirectional fiber orientation, the fabrics offer good resistance and support for the new geometry of the especially long H145 rotor blades. The fabrics are manufactured at the SGL Carbon site in Willich near Düsseldorf in a multi-stage process and delivered to Airbus Helicopters in Paris.

“The order emphasizes our growing presence in the aerospace business. With the fabrics for Airbus Helicopters, we have realized, qualified, and started serial production for a material concept for primary structural components for the first time,” says Dr. Andreas Erber, head of the aerospace segment in the business unit Composites – Fibers & Materials at SGL Carbon.

The current deliveries are part of a framework contract with Airbus Helicopters, intended to gradually intensify collaboration.

The new composite 5 blade rotor configuration for the H145 is said to offer 150 kilograms of additional useful load while also enhancing in-flight comfort, simplicity and connectivity.

The 60,000-square-foot R&D facility in Carlsbad, Calif., U.S. will focus on the design, development and production of CMCs for aerospace applications.

With the addition of the 60,000-square-foot R&D facility, Pratt & Whitney says it will add dozens of employees focused on the design, development and production of CMCs for aerospace applications. According to the company, CMCs are lighter and have higher temperature capabilities than traditional materials used in jet engines, so they can provide improved thermal efficiency for gas turbine engines. The company says CMCs will enhance its commercial and military engines, delivering benefits that include increased range, increased fuel efficiency and reduced emissions.

“Pratt & Whitney views CMCs as an enabling technology,” says Meggan Harris, senior director, CMCs, Pratt & Whitney. “This material will allow us to offer key capabilities for both our commercial and military customers, as their needs for ever-better fuel efficiency over longer flight times continue to evolve.”

“We're excited to establish a dedicated team of engineers and technicians working on the next generation of this potentially disruptive technology in a collaborative space,” says Andy Lazur, general manager of the Pratt & Whitney Carlsbad facility. “This new facility is a testament to Pratt & Whitney's commitment to innovation. This novel material technology enables us to provide dependable engines with enhanced performance to our customers.”


Biocomposite of the Year 2019 winners announced

Nova-Institute (Hürth, Germany) recently announced the winners of its2019 “Biocomposite of the Year” innovation awards, which were presented at the 8th Biocomposites Conference Cologne on Nov. 14-15 in Cologne, Germany.

According to Nova-Institute, currently, up to 80% of plastics can be replaced by biogenic fillers such as wood flour and cork, or by natural fibers for reinforcement. By now, the company says, biocomposites are available for almost every application: packaging, consumer goods, toys, handles, shoes, façade and terrace elements, floors, car parts and even furniture.

Designed by Golden Compound GmbH (Ladbergen, Germany), HOMEcap is said to be the world's first and only home compostable coffee capsule certified with “OK Kompost HOME.” It was launched on the market at the beginning of 2019. The HOMEcap is made from a compound comprising PTTMCC Biochems bio-based polymers PBS and PBSA mixed with sunflower seed shells and inorganic fillers. It comes with a paper- and cellulose-based lid that is sealable to the capsule without additional glue and is home compostable. The material composition is said to result in low oxygen transmission rates, and eliminates the need for additional barrier packaging. A VDI 4605 sustainability assessment showed that this capsule outperforms current state of the art capsules, like deep-drawn PP EVOH multilayer capsules, in terms of sustainability.

KNN Cellulose (Leeuwarden, Netherlands) has commercialized Recell’s biocomposite material made from recycled toilet paper that is separated at a sewage treatment plant, and can be mixed with a variety of polymers such as bio-based polymers, PLA or PHA. The product is said to add value to previously unused cellulose waste streams, and the granules are suitable for standard injection molding and extrusion lines. Current applications include flower pots, claddings, fences, terrace planks and boxes. Recell took part in the competition with a picnic table from Ecodeck comprising cellulose fibers recovered from wastewater treatment plants using Cellvation technology. The treatment plants benefit from lower operating costs, increased processing capacity and the reuse of cellulose fibers that would otherwise be incinerated.

Bcomp (Fribourg, Switzerland) has developed proprietary lightweighting solutions for high-performance applications by applying latest knowledge on composites to natural fibers. PowerRibs technology uses a reinforcing grid inspired by the thin veins in leaves, and that is said to provide maximum stiffness at minimum weight, enabling them to achieve the performance of carbon fibers in a motorsport body. The result is reportedly a 75% reduced CO2 footprint, 30% lower costs and improved safety without toxic dust and sharp shattering, as well as viable end-of-life options. PowerRibs are also said to reduce weight for car interior coverings by up to 40%.

The University of Tennessee (UT; Knoxville, Tenn., U.S.) has announced that it will begin offering a graduate certificate in advanced manufacturing beginning in January 2020. Along with additional classes, the program includes ongoing research projects. Classes are available either on campus or online via two-way videos. The program will be open to anyone with a background in engineering, and that applications will be reviewed on a case-by-case basis.

UT says that seven of the UT–Oak Ridge National Laboratory Governor’s Chairs, as well as others throughout the university, are dedicated to studying advanced manufacturing or the materials that support it. “We have experts in advanced materials, in polymers, in additive and subtractive techniques, and in metals,” says Doug Aaron, assistant head of undergraduate programs in the Department of Mechanical, Aerospace, and Biomedical Engineering (MABE), who is overseeing the new program.

Classes will be available in the Nathan W. Dougherty Engineering Building at UT, with the ability for students to take part online via two-way video capabilities. The goal is for students to be able to participate live or to review videos of lessons later, allowing students with full-time jobs to still take classes outside of their normal work hours.

“This certificate program is relevant for anyone from recent grads to people who’ve been working for years that are wishing they could add to their educational experience and maybe improve their employment,” says Aaron.

Students will be able to choose two courses from six electives, in addition to required courses in mechanics of materials and in advanced manufacturing. The goal is to have around 10 students in the inaugural semester, building up to 50 or so within three to five years. If the program meets those marks, it may become a full master’s degree program.

“We’ve had strong interest from some of our key industry partners on doing something like this,” Aaron said. “Taking on a full-time master’s program is a commitment that a lot of people who are in the workforce can’t really afford the time to take.”

Aaron says the team has been working behind the scenes since October 2017. “We’re taking what we know about other online courses and working with UT’s Office of Information Technology to figure out best practices and what the proper approach is to launch at the start of next semester,” he says. He adds that the team is drawing on knowledge shared from the UT Space Institute, which has online courses and is strongly affiliated with UT’s MABE faculty.

More information on the graduate certificate in advanced manufacturing can be found on the department website.