Structural composites specialist Carbon ThreeSixty (Wiltshire, U.K.) announced on Jan. 24 that it has installed an in-house Tailored Fiber Placement (TFP) cell, which the company says will enable it to deliver composite products three times faster than traditional methods while also reducing waste by up to 90%.

The automated cell, which the company says is currently the only commercially accessible machine of its type in the U.K., uses high-precision free-form fiber placement to enable greater design freedom, improved repeatability and multiple complex design configurations. It can reportedly produce up to 100 metric tonnes of composite preforms per year.

“We specialize in the design and out-of-autoclave manufacture of highly stressed novel composite structures. The TFP cell enables the production scale-up of our defense wheel products, while significantly contributing to ongoing R&D activity with clients in other sectors. Such challenging structures are inherently complex, and for true weight, stiffness and strength optimization the reinforcing fibers must be placed to run in specific orientations, so for us TFP was the obvious solution,” says Ed Allnutt, managing director of Carbon ThreeSixty. 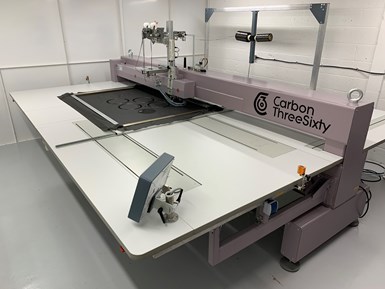 Carbon ThreeSixty invested in the TFP machine in fall 2019, following a successful trial of the technology at the U.K.’s National Composites Centre (NCC) in Bristol. According to Carbon ThreeSixty, that trial directly contributed to its securing ongoing R&D and pilot production projects with a global land defense OEM.

TFP’s automated technology enables accurate positioning of fibers onto a variety of backing materials to exact orientation requirements, and secures the fibers in place with fine thermoplastic polymer fibers. These bespoke preforms are then placed into precision resin transfer molding (RTM) closed molds, impregnated with high-performance resin and cured.

“Thanks to TFP when it comes to shape, the sky’s the limit and we are able to make products that were previously out of reach using traditional preforming methods. Helping our global customers gain access to next generation composite structures will also be quicker compared to traditional labor intensive routes, which are not only time consuming but less accurate with poorer repeatability,” Allnut says.

Carbon ThreeSixty says that TFP also enables it to take raw material to preform itself, without having to rely on suppliers for product-specific preforms. The process is also said to take hours, rather than weeks. Carbon ThreeSixty predicts that the new capability will also lead to job creation in the near future.

Carbon ThreeSixty will be highlighting the benefits of its new TFP capability at JEC World 2020.

Over the past three years, SGL Carbon (Wiesbaden, Germany) has invested a total of around €25 million ($27.5 million USD) in expansion of production capacities for specialty graphite-reinforced automotive components at its site in Bonn, Germany. This expansion has included installation of new production facilities, a modernized production set-up and construction of a new, 2,000-square-meter hall for part production. According to the company, this expansion project was completed at the end of last year and was inaugurated on Jan. 15 at the site in an official ceremony.

SGL Carbon cites continuously increasing demand for advanced solutions and products made from graphite in the automotive sector as the reason behind the expansion. Due to its durability, high strength, low friction behavior, and high conductivity, the material is reportedly suitable for many different automotive applications. Examples include rotors and vanes in vacuum pumps for brake boosters, bearings for exhaust gas management, and sealing rings and bearings for seals in coolant pumps. These solutions include applications for vehicles with conventional combustion engines as well as for e-mobility.

“Automotive components made from specialty graphite are increasingly becoming the standard in many different applications in the automotive industry. Due to their special properties, they are more and more frequently replacing the materials previously used in pumps and seals, such as plastic and metal. By investing in the modernization and expansion of production in Bonn, we are consolidating our leading position in this market and offering our customers real added value in the close partnership with each other. Through the expansion, we are also strengthening our site in Bonn,” explains Burkhard Straube, president of the graphite materials and systems business unit at SGL Carbon.

In Bonn, SGL Carbon produces a variety of customer-specific solutions made from specialty graphite for different growth markets. The main products are applications made of fine-grain graphite for the production systems in the solar, LED, and semiconductor industries, as well as the graphite-based automotive components. Various trainings and apprenticeships are also offered at the site.

CompositesWorld has launched a new survey to find out what types of composites information its readers like, and how they prefer to access it. Click here to participate.

CompositesWorld has launched a new survey designed to help its editors understand how consumers of composites-based information prefer to receive or access content, and what types of content are of greatest interest and use.

If you are involved in composites design, tooling or manufacturing, you are welcome to take the survey. It will take you just a few minutes to complete and will provide CompositesWorld valuable feedback that will help guide its content development.

Floating offshore wind turbine developer SeaTwirl (Gothenburg, Sweden) reported on Jan. 14 that it will be granted a patent for a divisible wind by turbine by the European Patent Office (EPO). SeaTwirl has already been granted the same patent in Sweden, the U.S. and China.

According to the company, the patent protects a solution where the wind turbine is divisible above and below the house that holds the generator and bearing, which means that the entire generator and bearing housing can be replaced just above the water surface by boat. It reduces costs for both installation and maintenance and minimizes downtime.

SeaTwirl is working strategically to build a broad patent portfolio. By protecting technical solutions that make the wind turbines cheaper to build and maintain, the company plans to strengthen its market position. The corresponding patent was approved in Sweden in 2017 and in the U.S. and China in 2019. The notice from the European Patent Office is dependent on SeaTwirl paying the required fees.

In a project first announced in 2018, SeaTwirl aims to become a leader in floating wind power and a key for reaching that goal is cost-efficiency through a robust design, meaning lower maintenance and a possibility to place the turbines in areas that may have rough conditions while still being excellent sources of wind.

As a part of this effort, SeaTwirl is developing a design methodology for fatigue assessment of vertical axis wind turbines, with a focus on the turbine and its composite material and structure.

“We’re happy to now be able to broaden our patent protection for this technical solution that reduces the cost of service and maintenance by simplifying installation and replacement of entire modules,” says CEO Gabriel Strängberg.

The Boeing 777X jetliner took to the skies on Jan. 25 for the plane’s first successful flight test, moving the widebody commercial aircraft into the next phase of testing. The 777X, which features the largest carbon fiber composite wingspan currently built, at 71.75 meters (235 feet), took off from Paine Field in Everett, Wash., U.S. for a 3-hour, 51-minute flight before landing at Boeing Field in Seattle.

Boeing reports that the 777X, which is based on the 777 aircraft, will deliver 10% lower fuel use and emissions, and 10% lower operating costs than the competition through advanced aerodynamics, its latest-generation carbon fiber composite wings and GE Aviation’s GE9X engine. 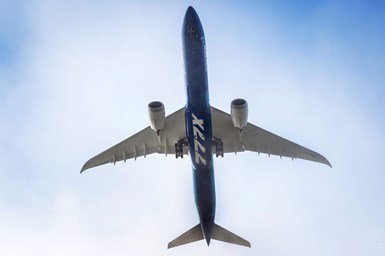 Boeing expects to deliver the first 777X in 2021. The program has won 340 orders and commitments from leading carriers around the world, including ANA, British Airways, Cathay Pacific Airways, Emirates, Etihad Airways, Lufthansa, Qatar Airways and Singapore Airlines. Since its launch in 2013, the 777X family has outsold the competition nearly 2 to 1, Boeing says.

“The 777X flew beautifully, and today's testing was very productive,” said Capt. Van Chaney, 777/777X chief pilot for Boeing Test & Evaluation, in a Boeing press release the day of the event. “Thank you to all the teams who made today possible. I can't wait to go fly your airplane again.”

On Jan. 25, Capt. Chaney and Boeing Chief Pilot Craig Bomben worked through a detailed test plan to exercise the airplane’s systems and structures while the test team in Seattle monitored the data in real time.

“Our Boeing team has taken the most successful twin-aisle jet of all time and made it even more efficient, more capable and more comfortable for all,” said Stan Deal, president and CEO of Boeing Commercial Airplanes. “Today's safe first flight of the 777X is a tribute to the years of hard work and dedication from our teammates, our suppliers and our community partners in Washington state and across the globe.”

The first of four dedicated 777-9 flight test airplanes, WH001 will now undergo checks before resuming testing. The test fleet, which began ground testing in Everett last year, will endure a comprehensive series of tests and conditions on the ground and in the air over the coming months to demonstrate the safety and reliability of the design.

According to Boeing, the 777X also combines the best of the passenger-preferred 777 and 787 Dreamliner cabins with new innovations to deliver next-generation flight experience, including a spacious cabin, large overhead storage bins, larger windows, better cabin humidity, less noise and a smoother ride.