Hexcel, a major supplier of carbon fiber as well as intermediate composite materials, is joining forces with aerospace and industrial equipment manufacturer Woodward to create Woodward Hexcel, which is expected to generate annual revenues of $5.3 billion.

Hexcel Corp. (Stamford, Conn., U.S.), the world’s second largest manufacturer of carbon fiber and a major supplier of intermediate composite materials, announced on Jan. 12 that it is merging with aerospace and industrial equipment OEM Woodward Inc. (Fort Collins, Colo., U.S.) via a definitive agreement composed of an all-stock merger of equals that is expected to create a premier integrated systems provider serving the aerospace and industrial sectors.

The combined company, to be named Woodward Hexcel, will be based in Fort Collins and will have more than 16,000 employees, manufacturing operations in 14 countries on five continents and a diversified customer base across multiple markets. For each company’s respective fiscal year 2019 on a pro forma basis, the combined company is expected to generate net revenues of approximately $5.3 billion and EBITDA of $1.1 billion, or a 21% EBITDA margin.

Gendron says: “Our two companies are each independently working toward addressing the sustainability and efficiency needs of our customers. This merger accelerates our technology investments and creates greater benefits and growth opportunities than either company could have achieved alone. Both Woodward and Hexcel have attractive growth trajectories, with strong aftermarket positions and increased composite penetration driving our respective outlooks. Our complementary cultures and shared commitment to operational excellence and customer satisfaction, together with our enhanced financial strength, will position us to better serve our OEM and aftermarket customers. We will be stronger together and are committed to delivering even greater value to all our stakeholders.”

Stanage says: “The future of flight and energy efficiency will be defined by next-generation platforms delivering lower cost of ownership, reduced emissions and enhanced safety – and a combined Hexcel and Woodward will be at the forefront of this evolution. Woodward’s innovative control systems and Hexcel’s advanced lightweight materials are designed to drive improved reliability, efficiency, and emissions. Through our combined scale and strong cash flow profile, we will be even better positioned to accelerate innovation in aerodynamics and propulsion efficiencies and support evolving customer needs. I am incredibly excited about what we can accomplish by uniting these two premier companies and world-class teams with similar values, cultures, and operating philosophies.”

Strategic and financial benefits of the merger, as reported in a statement issued by the two companies, include:

The transaction is subject to the approval of the shareholders of both Woodward and Hexcel, as well as other customary closing conditions, including required regulatory approvals. The parties expect the merger to close in the third calendar quarter of 2020, subject to satisfaction of these conditions.

Layoffs affecting 2,800 employees have been issued at the Wichita facility, due to ongoing production suspension and expected lower production going forward.

On Jan. 10, Spirit AeroSystems (Wichita, Kan., U.S.) issued a notice under the Worker Adjustment and Retraining Notification Act of layoffs affecting approximately 2,800 employees at its Wichita, Kansas facility. Spirit reports that it is taking this action because of the Boeing 737 MAX production suspension, as well as ongoing uncertainty regarding the timing of when production will resume and the level of production when it does resume. Spirit says that this decision allows the company to begin aligning its cost structure to the production suspension and, after such suspension, what Spirit expects will be lower production levels than in 2019.

Spirit is a significant supplier on the 737 MAX program, with its workshare accounting for 70% of the airplane’s structure. This includes the entire fuselage, thrust reversers, engine pylons and wing components. In addition, the MAX represents more than 50% of Spirit’s annual revenue.

Spirit reports that it has not received notice from its customer, Boeing (Chicago, Ill., U.S.), on how long the production suspension will last or what the production rate will be in the future. Spirit believes that, when production resumes, the levels will be lower than previously expected, due, in part, to the customer’s need to consume more than 100 MAX shipsets currently in storage at Spirit’s facilities. In addition, Boeing has several hundred MAX airplanes built but not yet delivered to its customers.

“We continue to work with Boeing to develop a new production schedule for 2020 with an eye toward minimizing disruption, maintaining the stability of our production capabilities, and best positioning Spirit for the future.”

The company also plans to implement smaller workforce reductions later this month for its plants in Tulsa and McAlester, Oklahoma, which also produce components for the MAX. Based on final production rates agreed with Boeing, Spirit says it may have to take additional workforce actions in the future.

Employees will receive compensation for the applicable 60-day notice period, and affected employees will start exiting the company beginning Jan. 22. Th company reports that it has taken steps to lessen the impact of expected layoffs, transferring some 737 MAX employees to other programs where possible, and making plans to facilitate job fairs with other aerospace companies to help laid-off employees transition to new jobs.

“The difficult decision announced today is a necessary step given the uncertainty related to both the timing for resuming 737 MAX production and the overall production levels that can be expected following the production suspension,” says Tom Gentile, Spirit AeroSystems president and CEO. “We are taking these actions to balance the interests of all of our stakeholders as a result of the grounding of the 737 MAX, while also positioning Spirit to meet future demand.”

“Our goal is to support Boeing and a safe return to service of the MAX,” Gentile adds. “We continue to work with Boeing to develop a new production schedule for 2020 with an eye toward minimizing disruption, maintaining the stability of our production capabilities, and best positioning Spirit for the future. When production levels increase sufficiently in the future, we look forward to recalling employees impacted by today’s announcement.”

At the Consumer Electronics Show (CES), the companies announced an aerial ridesharing partnership and a new eVTOL design.

Hyundai is the first automotive company to join the Uber Elevate initiative, with plans to bring its automotive-scale manufacturing capability and a track record of mass-producing electric vehicles. The air vehicle concept Hyundai released at CES was created in part through Uber’s open design process, a NASA-inspired approach that jump-starts innovation by publicly releasing vehicle design concepts so any company can use them to innovate their air taxi models and engineering technologies. 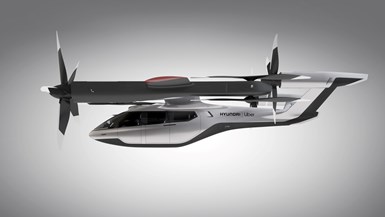 Through this partnership, Hyundai will produce and deploy air vehicles, and Uber will provide airspace support services, connections to ground transportation and customer interfaces through an aerial ride share network. Both parties are collaborating on infrastructure concepts to support take-off and landing for this new class of vehicles.

According to the companies, the S-A1 model unveiled at CES:

“Our vision of urban air mobility (UAM) will transform the concept of urban transportation,” says Jaiwon Shin, executive vice president and head of Hyundai’s Urban Air Mobility Division. “We expect UAM to vitalize urban communities and provide more quality time to people. We are confident that Uber Elevate is the right partner to make this innovative product readily available to as many customers as possible.”

Plastics production company Röchling Industrial (Haren, Germany) reported on Jan. 10 that it has proposed a $4.9 million warehouse expansion project at Röchling Glastic Composites in Cleveland, Ohio, U.S., that will add 26 new positions over a three-year period. According to the company, the new capacities will strengthen its market position in North America and improve delivery capacity for customers.

Röchling Glastic Composites is a pioneer in the commercial fiberglass products industry. Today, its primary business includes the production of semi-finished sheet, rod and profile stock for fabricated components in electrical equipment and infrastructure and thermal insulation for common plastic, rubber and oil and gas processing. The company projects to employ 125 people by end of 2020, up from the 104 staff employed at the beginning of this project.

“The investment will allow us to broaden business relations with our customers. That in turn will enable us to ensure the sustainable, long-term growth of the company and create additional jobs as well,” says Fred Sanford, managing director of Röchling Glastic Composites.

“Our business volumes in Cleveland have grown constantly over the last years. With the new capacities we can further improve our delivery capacity for composites and the service for our customers. I am very confident that our strong team in Cleveland will continue to grow its business in the coming years,” says Franz Lübbers, CEO of Röchling Industrial.

Rolls-Royce (Derby, U.K.) reported on Jan. 9 that it has opened a new facility in Bristol, U.K. to develop carbon fiber composite fan blades and fan cases for use on jet engines. The company says the goals for its new technologies are to reduce emissions, significantly reduce jet engine weight and lower fuel consumption.

The fan blades and fan cases being made at the facility are a feature of the Rolls-Royce UltraFan engine demonstrator, an engine design that the company says will reduce fuel burn and CO2 by at least 25% compared to its first Trent engine design. According to Rolls-Royce, one of its fan systems made with carbon fiber composites can save almost 700 kilograms per aircraft, the equivalent of seven passengers and their luggage. 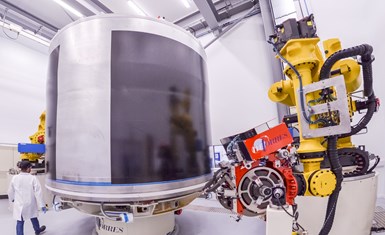 Rolls-Royce says its fan blades comprise hundreds of layers of carbon fiber materials pre-filled with resins. After heat and pressure are applied, each blade is finished with a thin titanium leading edge, which reportedly offers protection against erosion, foreign objects and bird strikes.

Rolls-Royce has developing carbon fiber technologies for several decades for use in engine parts. The new facility intends to take this technology to the next level, in part due to partnerships with the National Composites Centre (Bristol) and the Rolls-Royce University Technology Centre at the University of Bristol, in addition to other universities and research centers in the U.K. and Europe. The new facility will reportedly use low-energy, low-emissions processes, and is said to feature state-of-the-art automated manufacturing methods and materials. It also intends to maximize the use of raw materials, reducing waste. Rolls-Royce has pledged to achieve zero emissions at its operations and facilities by 2030.

The facility has secured 150 jobs in Bristol. An existing Rolls-Royce composite manufacturing technology facility, along with around 30 employees, has been transferred to Bristol from the Isle of Wight.