The BV audit was conducted on Carbon Nexus’s 100-metric-ton (nameplate) pilot line which is currently producing samples for trials with LeMond’s target customers in several SM industrial markets. In addition to accurately measuring oxidation times and assuring process traceability, BV oversaw the fiber sampling, packaging and shipping of audit samples for extensive testing at the BV laboratories in Pessac, France. Composite tow tests of the LeMond fiber were completed according to ASTM D 4018-17 standards.

LeMond and Deakin University are teamed to commercialize this rapid-oxidation technology, which enables reductions of 75% and 70% in capex and energy consumption per kilo of output respectively. LeMond says the rapid-oxidation process enables the company to produce carbon fiber with the lowest embodied energy of any standard PAN-based carbon fiber available today.

“This is a significant milestone for our company. Having our technology independently verified by BV validates the revolutionary nature of our technology,” says Greg LeMond, founder and chairman of the board of LeMond Carbon. “My team and I are excited to bring our high-performance, low-cost carbon fiber to the global market, and look forward to expanding into new markets where the current high cost of carbon fiber has been a significant barrier to adoption.”

“Deakin has always been excited about the potential of our patented new technology and it is encouraging to receive independent validation that our technology is effective at scale. We look forward to continuing to support LeMond as they commercialize a lower-cost and lower-emission carbon fiber,” says Derek Buckmaster, director Carbon Nexus.

Having proven the capability to successfully produce a competitive standard modulus carbon fiber, LeMond has launched a new capital campaign to develop a 5,400-metric-ton (nameplate) production facility in Oak Ridge. To date, parent LeMond Companies LLC has raised approximately US$18.6 million of seed capital from individual and institutional investors, including Deakin University

The first of three prototypes on its way to certification, the composites-intensive Embraer E-175-E2 jet completed its first flight on Dec. 12.

The Embraer E175-E2 made its inaugural flight on Dec. 12 from the company’s facility in São José dos Campos, Brazil. Embraer reports that the maiden flight of the E175-E2, which is the third member of the E-Jets E2 family, kicks off a 24-month flight test campaign for the jet.

Composite parts on Embraer’s E-Jet family are said to include flight-control components such as flaps, ailerons, elevators, rudders and spoilers, as well as landing gear doors, wing-fuselage fairings and radomes. 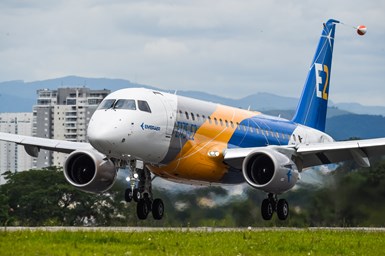 Embraer will use three aircraft for the E175-E2 certification campaign. The first and second prototypes will be used for aerodynamic, performance and system tests. The third prototype will be used to validate maintenance tasks and will be outfitted with interior furnishings.

The E175-E2 has one additional row of seats compared to the first-generation E175 and can be configured with 80 seats in two classes, or up to 90 in a single class. According to Embraer, the airplane will save up to 16% in fuel and 25% in maintenance costs per seat compared to the E175.

Embraer also reports that like the E190-E2 and the E195-E2, the E175-E2 will have the longest maintenance intervals in the single-aisle jet category with 10,000 flight hours for basic checks and no calendar limit for typical E-Jet operations.

“[The inaugural] flight of the E175-E2 marks the completion of our vision to produce a family of new-generation commercial aircraft that bring unparalleled cost savings to our customers, exceptional comfort for their passengers and fewer emissions for the planet,” says John Slattery, president and CEO of Embraer Commercial Aviation. “The E190-E2 and the E195-E2 are already stellar performers. The E175-E2 is just as impressive. We’re eager to get working on certification.”

GKN Aerospace will design and develop the empennage and electrical wiring interconnection systems for the AS2.

Aerion Supersonic (Reno, Nev., U.S.), leader in supersonic technology, has that GKN Aerospace (Redditch, U.K.) will design the empennage and electrical wiring and interconnection systems (EWIS) for the AS2 supersonic business jet.

According to GKN Aerospace, design activities have already started on-site at Aerion in Reno, Nevada and in GKN Aerospace’s engineering centers in the Netherlands and Romania.

“We are excited to collaborate with Aerion and to support the preliminary design phase of this all-new supersonic AS2 business jet. As technology leaders in both electrical wiring interconnect system (EWIS) and business jet empennages, we can bring unrivaled knowledge and expertise to the project,” says John Pritchard, CEO of GKN Aerospace ASEA.

Aerion’s AS2 is reported to be the first privately built supersonic commercial aircraft. The 12-passenger business jet is scheduled to begin flight testing in 2024.

TRB Lightweight Structures (TRB; Cambridgeshire, U.K.) has announced that it will soon be opening a composites manufacturing center in Richmond, Ky., U.S., as a joint venture with Toyota Tsusho America (New York, N.Y., U.S.). According to TRB, the 40,000-square-foot facility will be equipped with state-of-the-art robotics to allow high-volume production of carbon fiber components using TRB’s press-forming process.

The initial focus for the facility, TRB says, will be production of carbon fiber components for automotive applications, particularly for electric vehicles (EV). TRB says it has developed a production process that allows carbon fiber to be press-formed using advanced industrial robotics, allowing components to be manufactured at a similar price point to equivalent aluminum parts. The Richmond facility will complement TRB’s U.K. manufacturing operations, providing greater access to these materials for the North American market.

“We are delighted to announce the creation of TRB Lightweight Structures America together with Toyota Tsusho America. The U.K. is a global leader in composites, and we are very excited to bring our technology and expertise to the rapidly growing EV sector in the USA,” says Richard Holland, managing director of TRB.

All composite detail parts and assemblies will be manufactured and delivered from the KCV facility in Bennington, Vermont. Deliveries are expected to begin in 2020.

“Our in-house tooling and product design capabilities, coupled with our performance, allow us to provide the support our customers need when they look to increase market penetration at an accelerated pace,” says Alexander Gamble, general manager for Kaman Composites-Vermont. “This new relationship speaks to the value we provide to our customers, especially those in the demanding medical imaging segment.”

“This new customer win demonstrates the strength of Kaman’s composites capabilities to meet the rigorous requirements of the medical market. Our ability to deliver upon our commitments of quality, on-time delivery, and responsiveness allows us to attract the top customers across end markets who are looking to partner with leading manufacturers to provide solutions for their advanced composite requirements,” says Mark Withrow, vice president and general manager of Kaman Composites US.