The CAFIBO rail bogie is constructed from recycled and surplus carbon fiber and was developed by ELG Carbon Fibre and partners.

The bogie, which is made entirely out of surplus and recycled carbon fiber materials (see CW’s feature on the bogie’s design), was presented to more than 100 industry delegates at the Railway Industry Association’s (RIA) Unlocking Innovation event at the University of Huddersfield.

The new CAFIBO bogie is reportedly lighter than conventional bogies, and optimizes vertical and transverse stiffness. This bogie will:

“Replacing steel with recycled carbon fiber to produce a rail bogie is a world first so it is a hugely exciting and rewarding project to be part of,” says Frazer Barnes, managing director of ELG Carbon Fibre. “We hope to make recycled carbon not only an attractive option for the rail industry in terms of weight reduction but also to eliminate waste and drive down cost.”

“There are significant potential benefits from adopting novel materials and construction methods in railway vehicle bogies,” says Simon Iwnicki, director of the Institute of Railway Research at the University of Huddersfield. “The reduction in mass results in energy savings but can also reduce track forces and improve dynamic performance. I hope that the tests on the CAFIBO bogie being carried out here at Huddersfield will help to encourage the railway industry to accept these new techniques.”

The springs, intended for use with the Transit Skeleton chassis, are designed for high payloads and increased security standards, though are said to weigh about 50% less than conventional steel leaf springs. The serial application is supported by a one-to-one compatibility with standard steel springs. 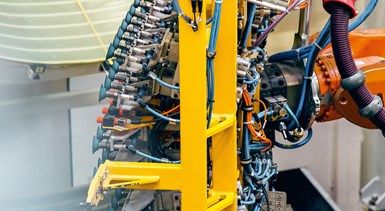 According to SGL Carbon, these leaf springs are the first to be manufactured with pre-impregnated glass fiber fabrics, which are produced at the SGL Carbon site in Willich, Germany. The SGL Carbon component plant in Innkreis, Austria, is responsible for the development and serial production of the springs, and the final products are delivered ready to install to the Ford-Otosan assembly plant in Kocaeli, Turkey.

“The design of these composite longitudinal leaf springs for the Ford Transit Skeleton chassis is yet another milestone in the development of production-ready lightweight leaf springs. They are not only characterized by their special material properties and semi-automatic production, but especially by their high compatibility with various customer model variants,” says Sebastian Grasser, head of the Automotive Composites – Fibers & Materials business unit at SGL Carbon.

What’s in store for the automotive industry in 2020?

In a webinar to take place Dec. 17, 2019 at 11:00 a.m. ET, Gary Vasilash of sister publication Automotive Design & Production and Michael Guckes of Gardner Intelligence will use their deep knowledge of the automotive industry to discuss where the industry has been and what may be in store for the industry in 2020.

The primary topics will be:

Michael Guckes is the chief economist/director of analytics for Gardner Intelligence, a division of Gardner Business Media (Cincinnati, Ohio, U.S.). He has performed economic analysis, modeling and forecasting work for nearly 20 years in a wide range of industries. He writes monthly columns for CompositesWorld about the Composites Fabricating Index. Read his December 2019 column.

Gary Vasilash has been editor-in-chief of Gardner Business Media’s automotive titles since 1996. He is a juror for the North American Car, Truck & Utility (NACTOY) Awards and co-host of the weekly “Autoline After Hours” webcast.

Register for the webinar and find out more.

According to Zund, the new North American headquarters are a testimony to the company’s growth and success over the past 15 years. Established in 2004 as sister company to Zünd Systemtechnik AG in Altstätten, Switzerland, Zund America has grown from a handful of employees to more than 80 and has now tripled the total square footage of its facilities, the company says. 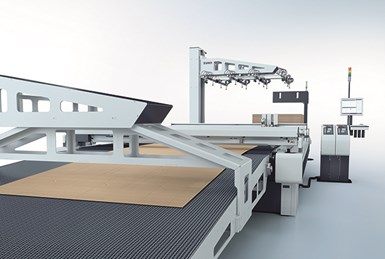 “This impressive, state-of-the art facility represents a tremendous investment in the future of our company. With nearly 10,000 square feet devoted to demonstrations and training, the new customer experience center is very much the centerpiece of the new building; nonetheless, the greater space and efficiencies it affords all other departments will allow us to continue supporting our rapidly growing customer base in the USA, Canada and the Caribbean for years to come and deliver the world-class service for which Zünd is known,” says Dan Ryan, Zund America’s CEO.

The design of the new building incorporates high-efficiency glass panels, HVAC and building automation systems for light, shade and temperature control. Zund America also says it has plans and space ready for further expansions in the future.


Albany Engineered Composites to work on Wing of Tomorrow program

Albany has signed a two-year agreement with Airbus to apply its 3D reinforced composites technology to next-generation wing substructure applications.

“We are very pleased to collaborate with Airbus to apply our 3D design and manufacturing know-how to their next generation aircraft,” says Olivier Jarrault, Albany International president and CEO. “We believe Albany provides unique design and production capabilities to Airbus, and this agreement marks an exciting and important next step in our relationship.”