According to Clean Sky 2, despite the COVID-19 outbreak and other related restrictions, in Sept. 2020 a full-scale ground cabin demonstrator for more affordable, small aircraft was built and assembled, what is said to be a major milestone toward the achievements of the “More Affordable Small Aircraft Manufacturing” project’s expected goals.

The idea, says Clean Sky, is to assess, down-select and validate at aircraft level the most relevant technologies through two full-scale demonstrators based on the PZL Mielec M28 short take-off and landing (STOL) aircraft. One demonstrator is a full-scale ground cabin demonstrator and the other is an engine nacelle flight demonstrator. 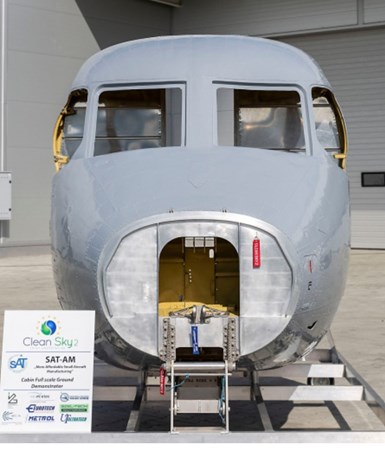 As a next step, a consolidated assessment of the benefits and results coming from the integration of the developed methodologies will be performed at A/C level. According to Clean Sky, some results that have already been released suggest that the number of joints were able to be reduced by more than 35%. Further, Clean Sky’s partner was able to reduce some steps of the assembly process by substituting joints and mechanical fasteners such as bolts and screws using new technologies in composites and additive manufacturing. Similarly, activities on the engine nacelle flight demonstrator, plan to prove their flight viability.

The AllOxITD project goal was to develop an all-oxide ceramic matrix composites (CMC) inter turbine duct for testing in Clean Sky’s “Advanced Geared Engine Configuration” (HPC-LPT) demonstrator. CMC have properties that enable them to withstand high temperatures up to 1,000°C, and unlike metallic materials, do not lose their strength (see “Bridging the gap between CFRP and CMC”).

This behavior, notes Clean Sky, makes CMC useful for components in the hot gas section of gas turbines. Because the composites can withstand significantly higher temperatures, the need for cooling air can be greatly reduced. Oxide CMCs also are said to have a lower specific weight than metallic materials. Therefore, both the lighter weight as well as the reduced need for cooling air have the potential to lower the environmental footprint of an aircraft engine.

Within the project, CMC manufactured via filament winding, woven prepregs and triaxial braids were investigated, taking into consideration their thermomechanical and thermophysical properties at relevant temperatures.

The woven prepreg CMC was chosen for the Inter Turbine Duct demonstrator testing and was further investigated through a verification and quality assurance program. Then, the project components were designed and produced. Overall, says Clean Sky, these early steps were important toward potentially bringing European (German) oxide CMC into service in aviation, even though the material quality and dimensional accuracy was not yet fully sufficient.

Additionally, due to the high level of quality necessary for aviation applications, the project also realized the material’s broad potential and dissemination for other industries. For example, the knowledge gained during the project contributed to the designing of a new production line in Heuchelheim, Germany, which became operational this past fall.

The German Aerospace Center (DLR, Cologne, Germany), the Institut für Textiltechnik of RWTH Aachen University (Aachen, Germany) and Schunk Kohlenstofftechnik GmbH (SKT, Heuchelheim, Germany) made up the consortium of AllOxITD. With a grant of €3.07 million, the project began in Dec. 2015, and ended in May 2020.

Illustration of a structural supercapacitor developed in SORCERER.

Electrically-powered aircraft mean lower carbon emissions and cleaner air. As aircraft become increasingly electrically powered, it’s important to consider new ways to carry more electrical energy onboard. Combining this aim with the ever-present need to reduce weight on aircraft using composites is the ambition of Clean Sky’s SORCERER (Structural pOweR CompositEs foR futurE civil aiRcraft) project. SORCERER focuses on the development of composite materials that can additionally store and deliver electrical energy and works to address the challenge of lightweighting.

“This project is also an enabler for future electrical and hybrid-electric propulsion aircraft,” says Clean Sky 2 project officer Jimmy Tchen. “In terms of energy storage there’s a big challenge. The traditional way to minimize illustration of a structural supercapacitor (SC) developed in SORCERER has been to try to increase the power density of the batteries. SORCERER’s approach is to develop a multifunctional material which could combine structural and energy storage functions, providing weight and volume reductions.”

The project, which was funded in part by the EU’s Horizon 2020 program, was undertaken by a consortium led by Imperial College London (ICL, London, U.K.) and supported by Chalmers University of Technology in Gothenburg, Sweden; the Royal Institute of Technology (KTH) in Stockholm; and IMDEA Materials Institute in Madrid, Spain. The workload was divided into three interconnected streams.

SORCERER is a very important step for European aviation towards making electric aviation a reality, but there is still a long way to go.

The project’s second stream focused on technical issues associated with structural batteries, an activity led by Chalmers University. Here, the materials proposed were evaluated with respect to their future aircraft operational conditions.

Third, there was a stream of activity related to structural energy generation using ion-intercalated carbon fibers, and energy harvesting solutions, led by KTH. Here, the focus was on enhancing efficiency and power output, with the aim of progressing this technology towards Technology Readiness Level (TRL) 3.

According to Tchen, “In terms of TRL maturity the structural supercapacitor is at a more mature level than the two other technologies. At the lowest maturity, energy harvesting. This will be a lab scale demo. And for the structural batteries they’re looking at a full-size demonstrator.”

Demonstrator of structural supercapacitor made by project partner IMDEA.

For the structural supercapacitors, the SORCERER team planned to manufacture an aircraft door-frame beam, a structural part with embedded structural supercapacitors. But Clean Sky suggested this would prompt a question: Batteries on mobile phones and laptops have a limited life. They don’t hold their charge so effectively after a couple of years. If an aircraft structure is also a form of battery, does that mean that the airframe will have a limited life in terms of its ability to store energy?

“Yes, that is a potential issue, as it would be with batteries,” says Professor Emile Greenhalgh, professor of Composite Materials and head of the Composites Centre at ICL, who leads the SORCERER project. “But the technologies we are developing are covering a range of power sources, not just batteries. For instance, the work at ICL is focused on supercapacitors, which don’t store as much energy, but have much better longevity.”

Greenhalgh continues, “This is not embedding batteries, but producing a material which intrinsically can undertake dual roles. This builds on knowledge and capabilities which have been developed in the U.K. and Spain (structural supercapacitors) and Sweden (structural batteries) over the last decade, and on learnings from a successful forerunner of this project, STORAGE, funded by an earlier EU research funding program. This project enables full electrification of future air transport, which is an aspiration of organizations such as Airbus, who wish to have a fully electric 100-seat aircraft by 2050.”

According to Clean Sky, SORCERER was a very important step for European aviation towards making electric aviation a reality, but there is still a long way to go. If conventional batteries were adopted for a 100-seat aircraft, the performance of the batteries would need to exceed the current state-of-the-art by a factor of at least 10. This would mean adoption of very exotic battery chemistries which are immature. It would also mean aircraft carrying very highly concentrated sources of energy (i.e. at energy densities akin to that of explosives), so this approach clearly has safety issues that would require extensive research and testing.

“Our alternative approach means the concentration of energy needed would be much lower, and hence would negate the same safety issues,” says Greenhalgh. “It would also mean an overall reduction in aircraft weight, offering savings regarding environmental impact.”

Production of large and complex composite parts for the aerospace industry, such as carbon fiber-reinforced polymers (CFRP), still relies largely on trial and error approaches of composite design. According to EU research results, the new TRANSITION process simulation tool promises significant reduction in time, cost, error, scrap and energy consumption. According to Clean Sky, the project has “taken the guesswork and ‘re-work’ out of CFRP composite manufacturing.” 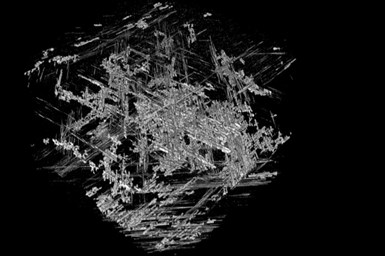 According to Dennis Bublitz, TRANSITION coordinator and Chair of Carbon Composites at the Technical University of Munich (TUM, Munich, Germany), “The inherent variability in the [CFRP] manufacturing process leads to variations in the final part’s quality, like uneven part compaction and porosity, increasing the risk of rejection. TRANSITION set out to meet these challenges by developing a process simulation tool to be introduced early in the design phase.”

As a result, TRANSITION’s experiments are said to have provided invaluable insight into factors influencing the porosity of materials subjected to various processing conditions, via micrographs and high-resolution micro-computerized tomography scans (micro-CT scans). Scientists also developed and implemented a new methodology to measure pressure between the prepreg and the tool in the autoclave.

The TRANSITION methodology was presented at the 2017 Composites and Advanced Materials Expo and the tool is now integrated in courses at the TUM to expose students to practical applications.