Sonny Vu, who became CEO of Arevo in January 2020, says the Superstrata launch signals the company’s strategic commitment to parts manufacture, in addition to equipment and technology sales. Also, he notes that although the Superstrata is a business-to-consumer (B2C) product, ultimately he wants to position the company as a business-to-business (B2B) parts supplier, with facilities in multiple countries. “We are pursuing a multi-location B2B model,” Vu says, “leveraging a B2C product to start.”

Vu says the Superstrata’s frame and fork will be manufactured in Vietnam at a facility Arevo is standing up in the next few months. At that facility, Arevo will install 12 of its robotic DED systems, which will deposit a polyamide resin with continuous carbon fiber (AS4) supplied by Hexcel (Stamford, Conn., U.S.) to build the bicycle structures.

“This bike was designed to leverage all the benefits of this new manufacturing technology to get the best of both worlds: strength and lightness,” says Bill Stephens, an award- winning bicycle designer and the creative force behind Superstrata. 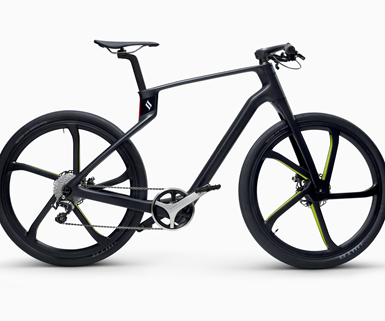 Vu says Arevo expects, eventually, to operate 120 DED systems in the Vietnam facility, with new units featuring faster laydown speeds. Currently, he says, a single DED system can manufacture two bike frames per day, with next-generation machines expected to increase that to six frames per day. “Laydown speed, porosity and cost of capital are already well aligned,” Vu says. “We are working hard to increase the speed to get the cost of capital down further. We want this to be not just sustainable, but fast-growing.”

The Ion e-bike can be fully charged in two hours and has a range of 60 miles per charge. Both Terra and Ion will feature integrated data and power wiring throughout the frame, enabling a variety of electronic upgrades. Additional options include different riding styles (racing, street, gravel, touring), wheel type (metal or carbon fiber) and colorways (light or dark).

“My Olympic race bikes were light, but would crack when pushed too hard or crashed. Having a bike that’s light like other carbon fiber bikes but really tough is a dream come true,” says Sky Christopherson, two-time former Olympian cyclist and world record holder for the velodrome sprint.

Superstrata is taking orders now and will begin delivery in December 2020.