Co-designed by Designworks, the design innovation studio for the BMW Group, Skai’s design focuses on simplicity, safety and environmental sustainability. Other members of the development team include aerospace experts, engineers and pilots from NASA and other organizations.

Said to be 95% reusable and 99% recyclable, Skai’s hydrogen fuel cells emit only heat and water and enable Skai to travel further distances (up to 4 hours and about 400 miles) and carry a greater payload than aircraft with traditional fuel systems.

Alaka’i says it has initiated a test program for FAA certification.

The aircraft also features six electric motors, seats for up to five passengers, and the ability for autonomous piloting in future versions. 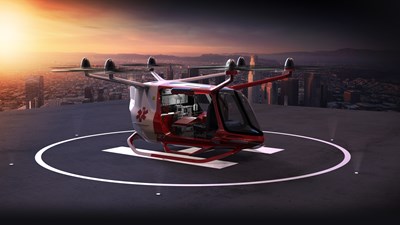 Applications of Skai are said to include air taxi travel as well as medical and cargo transport. Source | Alaka’i Technologies

“Our focus for this project was to help build a new consumer facing brand from scratch — considering and designing all touchpoints — digital, physical and service,” says Holger Hampf, president of Designworks. “And as a result, delivering an all-encompassing user-centric experience which is purposeful and highly desirable in all aspects.”