Airbus opens a new A220 final assembly line at its Mobile, Ala., U.S., location and begins assembly of the first A220 for JetBlue.
#nextgenaerospace #aeroengines #airbus

Airbus (Toulouse, France) announced on May 19 official inauguration of its production activities in a newly built final assembly line (FAL) hangar, and started production of the first U.S.-built A220 for JetBlue, two significant milestones for its commercial aircraft production facility in Mobile, Ala., U.S.

The 270,000-square-foot hangar, where both A220-100 and A220-300 aircraft can be assembled, is open for business after an 18-month construction project. It houses five primary assembly stations where major airframe component assemblies come together for a completed aircraft in a flowline process. Prior to the new space, Airbus used existing space in the Mobile facility’s A320 FAL hangar, as well as newly built support hangars for production of the A220 aircraft in August 2019. Now, with the completion of the new hangar, the Airbus production site in Alabama has doubled in size. 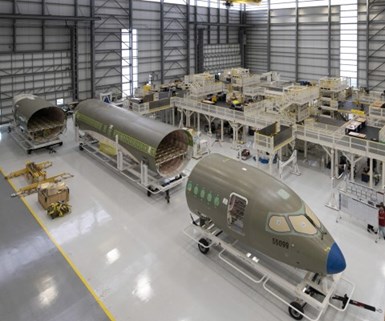 In addition to the new FAL, Airbus also announced production of its first component assemblies for what is to be an A220 for Jetblue. JetBlue will be the second customer served by the Mobile team, with its first U.S.-made A220 scheduled for delivery in Q4 2020.

The only aircraft purpose-built for the 100-150 seat market, Airbus says the A220 focuses on fuel efficiency and widebody passenger comfort in a single-isle aircraft. The A220 features infused carbon fiber wings fabricated by Bombardier in Belfast, Northern Ireland, and Pratt & Whitney’s latest-generation PW1500G geared turbofan engines to offer at least 20% less fuel burn per seat compared to previous generation aircraft.

“The team is excited to start working in their new facility and to welcome a new customer. It’s a strong endorsement from JetBlue in this challenging time,” says Paul Gaskell, president of A220 U.S.A and head of the A220 program in Mobile. “The expansion of our commercial aircraft production in Mobile to a second product line further solidifies Airbus’ standing as a global aircraft manufacturer, and confirms that Airbus is an important part of the American manufacturing landscape. This A220 assembly line will help satisfy the U.S. demand for the A220 aircraft.”