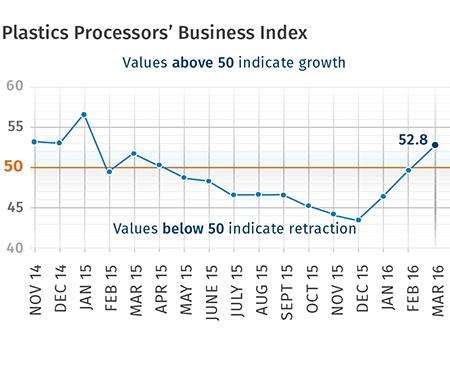 With a reading of 52.8, Gardner’s Plastics Processors’ Business Index for March rose into growth territory (above 50) for the first time since April 2015, ending 10 straight months of contraction (below 50). The index has increased sharply in the last three months. In March, every sub-index except exports made a positive contribution to the overall index.

Material prices decreased for the fourth time in five months in March, although the rate of decrease was negligible. Prices received continued to decrease, but the rate has decelerated slowly since June 2015. Future business expectations have increased noticeably since December, reaching their highest level since March 2015.

Every region except the South Central expanded in March. The North Central-West grew at the fastest rate—the first time since last June.

Compared with one year ago, future capital spending plans for the next 12 months decreased nearly 14% in March. Since December, the month-over-month rate of change has alternated between contraction And growth. But this appeared to indicate the early stages of an expansion in capital spending at plastics processors.

Steven Kline Jr. is part of the fourth-generation ownership team of Cincinnati-based Gardner Business Media, which is the publisher of Plastics Technology. He is currently the company’s director of market intelligence. Contact: (513) 527-8800  email:skline2@gardnerweb.com
blog: gardnerweb.com/economics/blog