Smaller operations might be struggling, but the heart of the industry is growing. 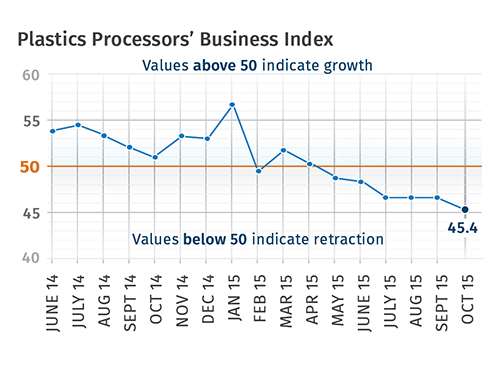 With a reading of 45.4, Gardner’s Plastics Processors’ Business Index showed that the overall market contracted at a slightly faster rate in October than it in had the previous three months. In October, the index contracted for the sixth month in a row and was at its lowest level since December 2012.

But looking more closely, the performance of smaller processors (20-49 employees) is what’s dragging down the overall index. They had it worse in October than September. And processors with fewer than 20 employees were even bleaker: Their index was below 40 for the second month in a row.

The core of the plastics processing market is doing much better. Plants with more than 250 employees saw their index jump to 56.3, its highest level since May. What’s more, facilities with 100-249 employees had an index of 60.2. Business conditions at these companies have been strong  last December.

The backlog index hovered around 40 for the sixth month in a row, indicating that capacity utilization would continue to weaken. Employment contracted for the second time in three months. Because of the strong dollar, exports remain mired in contraction. Supplier deliveries lengthened at a much faster rate in October.

Material prices increased for the first time since July. However, throughout 2015 the material prices index has been below the level of the previous three years. Prices received continued to decrease, but at a rate that has been decelerating slightly since June. Future business expectations weakened somewhat after improving in the last few months.

The West was the only region to expand in October. The South Central region contracted after expanding last month. The index for the Northeast fell to its lowest level since December 2012.

Steven Kline Jr. is part of the fourth-generation ownership team of Cincinnati-based Gardner Business Media, which is the publisher of Plastics Technology. He is currently the company’s director of market intelligence. Contact: (513) 527-8800;
email: skline2@gardnerweb.com; blog: gardnerweb.com/economics/blog