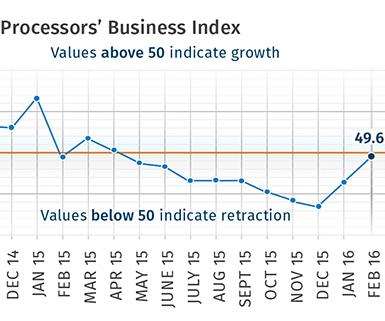 With a reading of 49.6 in February, Gardner’s Plastics Processors’ Business Index reached its highest level since April 2015, which was the last time the industry grew. An index of 50 would indicate a market that is holding perfectly even.

Employment contracted after increasing last month. Because of the strength of the dollar, exports remain mired in contraction. However, the rate of contraction has slowed substantially in the last three months. Supplier deliveries lengthened after shortening last month for the first time in the history of the index.

Material prices decreased for the third time in four months. Prices received continued to decrease. But the rate of decrease has declined somewhat since June. Future business expectations decreased slightly from last month but were still notably above the level of the second half of 2015.

The South Central was the fastest-growing region in February. It grew for the first time since September and at its fastest rate since December 2014. Also growing were the Southeast, Northeast, and North Central-East regions. The West and North Central-West regions contracted.

Compared with a year ago, capital spending plans for the next 12 months increased for the first time since August 2014. This month they increased 8.3%. The annual rate of change was contracting at its slowest rate since May 2015. The trend in capital spending clearly was improving.

ABOUT THE AUTHOR: KLINE

Steven Kline Jr. is part of the fourth-generation ownership team of Cincinnati-based Gardner Business Media, which is the publisher of Plastics Technology. He is currently the company’s director of market intelligence. Contact: (513) 527-8800  email:skline2@gardnerweb.com
blog: gardnerweb.com/economics/blog