Mid-size plants expand for fourth month out of five. And compared with one year ago, capital spending plans are up 32%. 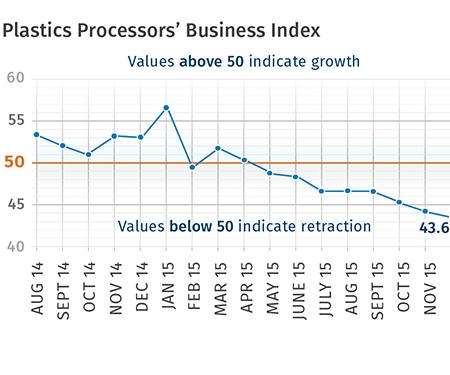 With a reading of 43.6, Gardner’s Plastics Processors’ Business Index contracted at an accelerating rate in December for the fourth month in a row. In total, the industry has contracted every month since May 2015. The performance of the largest processors (250+ employees) dragged down the total index, but plants with 100-249 employees grew for the fourth time in five months.

Overall, new orders and production contracted for the sixth month in a row. The backlog index has contracted since January 2015. The continued contraction in backlogs indicated that capacity utilization at plastics processors would decrease through the first half of 2016. Employment contracted for the fourth time in five months. Because of the strength of the dollar, exports remain mired in contraction. However, the rate of contraction stabilized at the end of 2015. Supplier deliveries lengthened at a somewhat slower rate for the second month in a row.

After decreasing in the previous month, material prices increased in December. Since August, the index has been bouncing around 50, but generally the decrease in prices has been greater than the increase in prices. Prices received continued to decrease. But the rate of decrease has decelerated slightly since June. Future business expectations weakened for the third month in a row. They were at their lowest level since November 2012.

Larger processors had performed quite well in the last couple of years. However, in the last two months of 2015, conditions at these companies weakened significantly. In both months, the largest processors had an index below 40. That was a significant reason for the decline in the total index at the end of 2015. Plants with 100-249 employees expanded for the fourth time in five months. Facilities with 50-99 employees expanded for the second time in four months. Companies with 20-49 employees and 1-19 employees both had noticeable drops in their indices in December.

Every region contracted in December. The North Central-East had the highest index at 47.9.

Steven Kline Jr. is part of the fourth-generation ownership team of Cincinnati-based Gardner Business Media, which is the publisher of Plastics Technology. He is currently the company’s director of market intelligence. Contact: (513) 527-8800 email:skline2@gardnerweb.com; blog: gardnerweb.com/economics/blog