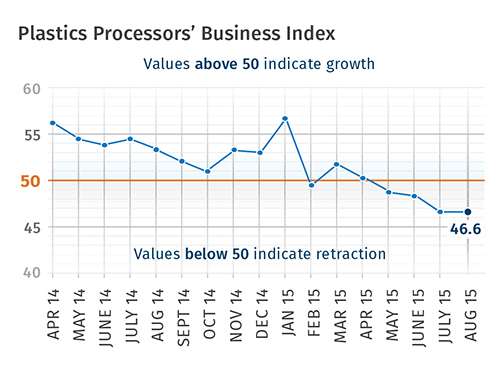 With a reading of 46.6, Gardner’s Plastics Processors’ Business Index contracted at the same rate in August as it did July. The index has trended lower since March 2014—except for a brief spurt of accelerating growth from October 2014 to January 2015. In August, the index was at its lowest level since December 2012.

Generally, the production index has remained much higher than the new orders index. Therefore, backlogs continued to contract at a significant rate in August. The backlog index has hovered around 40 for four straight months, but the accelerating contraction in the index has stopped. However, the trend in backlogs indicated that capacity utilization at plastics processors would continue to fall heading into 2016.

Employment contracted for the second time in three months. Exports continued to contract due to the strong dollar. While supplier deliveries continued to lengthen in August, the rate of lengthening has decelerated noticeably since May.

The material prices index dropped sharply in August to its lowest level since December 2011. Prices received by plastics processors have decreased since December 2014. The rate of decrease has steadily accelerated over that time period. Future business expectations ticked up slightly from last month.

Conditions at large processors improved significantly in August. Plants with more than 250 employees expanded for the second month in a row and for the third time in four months. Plants with 100-249 employees grew at the fastest rate in August and have grown every month but one since December 2014.

The Southeast was the fastest growing region in August and has expanded in five of the last six months. The Northeast returned to growth after contracting in the previous three months. The West contracted for the sixth time in seven months.

Steven Kline Jr. is part of the fourth-generation ownership team of Cincinnati-based Gardner Business Media, which is the publisher of Plastics Technology. He is currently the company’s director of market intelligence. Contact: (513) 527-8800;
skline2@gardnerweb.com   blog: gardnerweb.com/economics/blog