Processing market seems to have stabilized. 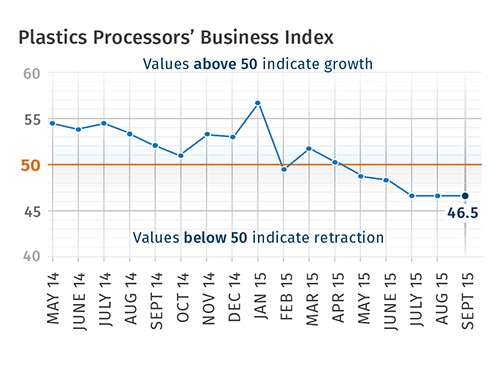 With a reading of 46.5, Gardner’s Plastics Processors’ Business Index showed that the processing market contracted in September at virtually the same rate as in the prior two months. While the index had trended lower since March 2014—except for a brief spurt of accelerating growth from October 2014 to January 2015—it now appears to be breaking out of its downward slide. In September, the index contracted for the fifth month in a row and was at its lowest level since December 2012.

Because of the strength of the dollar, exports remain mired in contraction. Supplier deliveries lengthened at a marginal rate for the second month in a row.

Material prices were unchanged in September. Throughout 2015 the material prices index has been below the level of the previous three years. Prices received continued to decrease. Meanwhile, future business expectations have improved in the last two months. They were near their highest level of the last five months.

Plants with more than 250 employees expanded for the third month in a row. Facilities with 100-249 employees grew at a very fast rate for the second straight month. Processors with 50-99 and 20-49 employees returned to growth mode this month.

However, processors with fewer than 20 employees continued to hold the overall index back. These companies had their index fall to 37, which was their lowest index on record and the only time it had fallen below 40. The weaker performance at smaller companies combined with lower response from larger facilities is one reason the index has been weaker in 2015.

The South Central was the only region to grow in September. The Northeast just barely contracted after expanding last month.

Future capital spending plans remained below average in September. However, compared with a year ago, the rate of contraction has slowed for three straight months.

Steven Kline Jr. is part of the fourth-generation ownership team of Cincinnati-based Gardner Business Media, which is the publisher of Plastics Technology. He is currently the company’s director of market intelligence. Contact: (513) 527-8800;
email: skline2@gardnerweb.com   blog: gardnerweb.com/economics/blog