Bombardier Belfast, fabricator of the infused composite wings for the Airbus A220 single-aisle aircraft, is for sale. The ownership under which this facility lands may say a lot about the future of infusion in large aerostructures.
#airbus #boeing #closedmolding 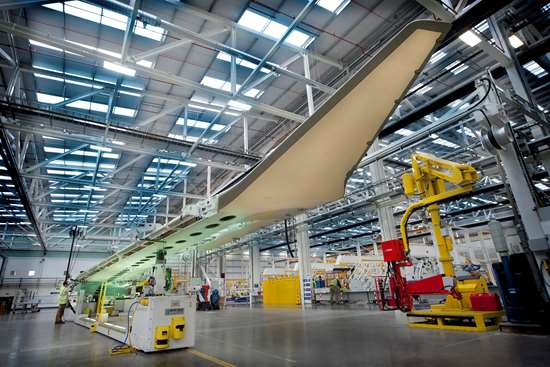 The wing of the Airbus A220 is fabricated using resin infusion at Bombardier’s manufacturing facility near the George Best Belfast City Airport. Use of resin infusion to manufacture aerostructures is an emerging material and process combination that likely will see expanded use in future aircraft programs. Photo | Bombardier

Who might acquire these facilities, and whether or not certain intellectual property will come with the acquisition, will be key not just to the facilities and the buyers, but to the larger aerocomposites industry.

The centerpiece of the Bombardier Belfast operations is the fabrication of the wing for the Airbus A220. The A220 is a single-aisle commercial passenger aircraft that started life as the Bombardier CSeries, which was sold by Bombardier to Airbus in late 2017, not long after the CSeries entered the market. The A220 wing is one of two commercial aircraft wings in the world that is fabricated using resin infusion technology (the other is the wing for the Irkut MC-21 aircraft, in Russia).

Use of infusion is significant because composite wings for commercial aircraft have been, traditionally, made with autoclave-cured prepregs. This is the material/process combination used to make wings (and other structures) for the Airbus A350, the Boeing 787 and the Boeing 777X. Infusion is attractive because it allows for cost-effective, efficient consolidation of wing skins, spars and stringers into a single assembly, which helps reduce fastener use.

A fully infused structure would be one manufactured entirely outside the autoclave. The A220 wing, although infused out-of-autoclave, goes through a final consolidation cycle in autoclave. It’s an ambitious process, particularly for a production aircraft.

All of this is important because the commercial aerospace industry is on the cusp of a new wave of aircraft development — Boeing NMA, possible replacements for the 737 and A320 — that likely will make use of out-of-autoclave materials and processes, including resin infusion for wings and thermoplastic composites for fuselage sections. Because of this, there exists within Bombardier Belfast a great deal of infusion experience and knowledge that will be pivotal to future aerostructures manufacturing.

Short Brothers plc developed the infusion process used to make the A220 wings, and owns the intellectual property rights thereto. Maximizing the value of the Bombardier Belfast sale will depend, in large part, on these rights remaining with Short Brothers and therefore transferring to control of the new owners.

Who will acquire Bombardier Belfast remains to be seen, particularly with a price tag of $1 billion, as suggested by a report in The Financial Times. The list of potential buyers includes Airbus, GKN Aerospace (U.K.) and Spirit AeroSystems (U.S.). The FT report also suggested Triumph (U.S.) and Aernnova (Spain) as potential suitors.

Airbus tops the list because of the A220 connection, plus the company is already heavily invested in development of resin infusion for wing structures. GKN already specializes in composites use in wings and would be a good fit, but it’s also on the sales block and might not be in a position to act. Spirit, as the world’s largest Tier 1 aerospace manufacturer, has much composites expertise and supplies parts and structures to both Airbus and Boeing.

Hanging over the sale is Brexit, which might be enough to scare away some would-be buyers. Or, it might prompt a buyer to transfer manufacturing to another non-Brexit location. However, with 3,600 employees in Northern Ireland, Bombardier Belfast will not be easily or quietly moved.

Regardless, how this sale turns out will send very strong signals to the aerocomposites manufacturing community. Stay tuned.