In the 21st century, one of the more compelling human stories is the growing need for resources to house Earth’s expanding population, and the growing awareness that those resources are finite and, in many cases, increasingly scarce. One case in which that contrast is acute is residential housing. The United Nations foresees a deepening global housing crisis — more than 440 million urban households will be in need of affordable accommodation by 2025. But conservationists warn that the sustainability of Earth’s forests, the source of the lumber to build those accommodations, is at serious risk. This conflict has done much to pique interest in fast-build construction technologies based on fiber-reinforced composites. As the new century’s third  decade begins, composite manufacturers’ efforts in the housing arena are picking up speed.

Composite piles were installed underneath a New Jersey bridge. The comparatively low weight of piles made it possible to drive them into the sea bed with a relatively small excavator, which clamped to the top of each pile — a source of cost savings on the project. Source | Schiavone Construction

Use of composites in marine pier structures is also growing. An example of this is the Manahawkin Bay Bridge that links mainland New Jersey (U.S.) to Long Beach Island. New Jersey Department of Transportation (NJDOT) authorities wanted to surround the bridge’s deepest structural piers with energy-absorbing structures that would prevent damage to them from a large, out-of-control vessel. In this case, NJDOT specified an impact load or force of 40.76 kip-ft, which it calculated would be produced by a 200-ton hopper barge, the largest vessel that NJDOT knew would ply the waters beneath the bridge, says House. The Manahawkin piles would be fendering piles, which would need to resist lateral loads. The hollow tubes would be driven down into the sea bed far enough so that the soil friction provides fixity, to hold them in place. These tubes would then be filled with concrete.

To make the piles, heavy quadraxial fabrics supplied by Vectorply Corp. (Phenix City, Ala., U.S.) are combined with polyester or vinyl ester resin, supplied by Polynt Composites (Carpentersville, Ill., U.S.) or other suppliers, in a proprietary manufacturing process that combines vacuum infusion with centrifugal casting. The closed mold is spun to help compact the fibers during the infusion process. The quadraxial fabrics ensure that at least 50% of the fibers run axially along the pile length, and about 25% of the fibers end up as hoop direction reinforcement. The remainder are oriented at 45 degrees. All piles are gel coated, with product supplied by Polynt Composites or INEOS Composites (Columbus, Ohio, U.S.) for added durability and appearance. 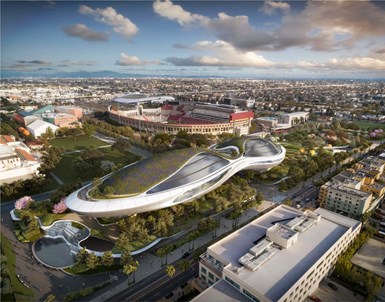 On the horizon, keep an eye out for the Lucas Museum of Narrative Art, currently under construction in Los Angeles’ Exposition Park near the Unviversity of Southern California. The museum, founded by filmaker George Lucas and his wife, Mellody Hobson, Co-CEO and President of Ariel Investments, was designed by architect Ma Yansong and features a highly organic and unusually shaped design that will feature new public green space, state-of-the-art cinematic theaters, a research library, numerous spaces for onsite education, restaurants, retail and event spaces. It will also feature significant use of composite materials.