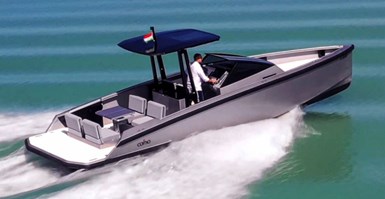 Juhász began working with composites as a boatbuilder. His projects include Como Yachts and the Narke Electrojet, which claims to be the world’s first all-electric personal watercraft in series production. “In Hungary, you cannot use petroleum-based fuels on any lakes, and we have the second largest lake in Europe,” he explains. “We are developing more electric boat models for companies. I needed a faster, cheaper way to create plugs and molds for these projects.”

The CEAD Robot Extruder was Juhász’ Christmas present last year. “I already had a 5-axis CNC machine,” he says, “so we just bought the Robot Extruder print head and attached it.” The CNC machine measures 4850 by 2635 by 1460 millimeters and uses stepper motors with Mach3 motion controller software. Designed and built by Juhász six years ago, it was available to convert to a 3D printer when he purchased a new Hungarian-built CNC system last year to take over milling and machining.

Rapid Prototype 3D printed the composite mold used to produce a composite shell structure, which will be transformed by its customer, Krismar, into a customized heavy truck sleeper cab. SOURCE | Krismar.

One of the first projects completed with this new 3D printing system is a fiberglass mold for a composite sleeper cab for custom truck and trailer manufacturer Krismar (Waardamme, Belgium). “This is quite a big component, measuring 2550 by 2200 by 1200 millimeters,” says Juhász. “We wanted to print the maximum thickness possible in order to avoid warping and deformation when cooling down.” The 30-millimeter thickness was printed in two layers of 15 millimeters each and used almost 400 kilograms of glass fiber-reinforced polypropylene pellets.

The mold was printed in four pieces, including separate left and right sideskirts. “We CNC milled the molding faces of each piece separately,” he explains, “and then screwed and clamped them together before applying sandable gelcoat and hand-laminating with four layers of 300 grams/square meter chopped strand mat and polyester resin.” 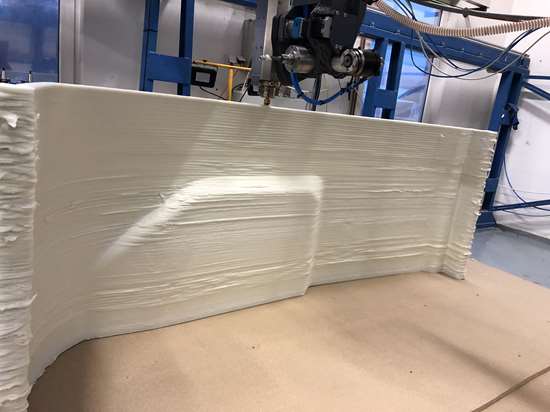 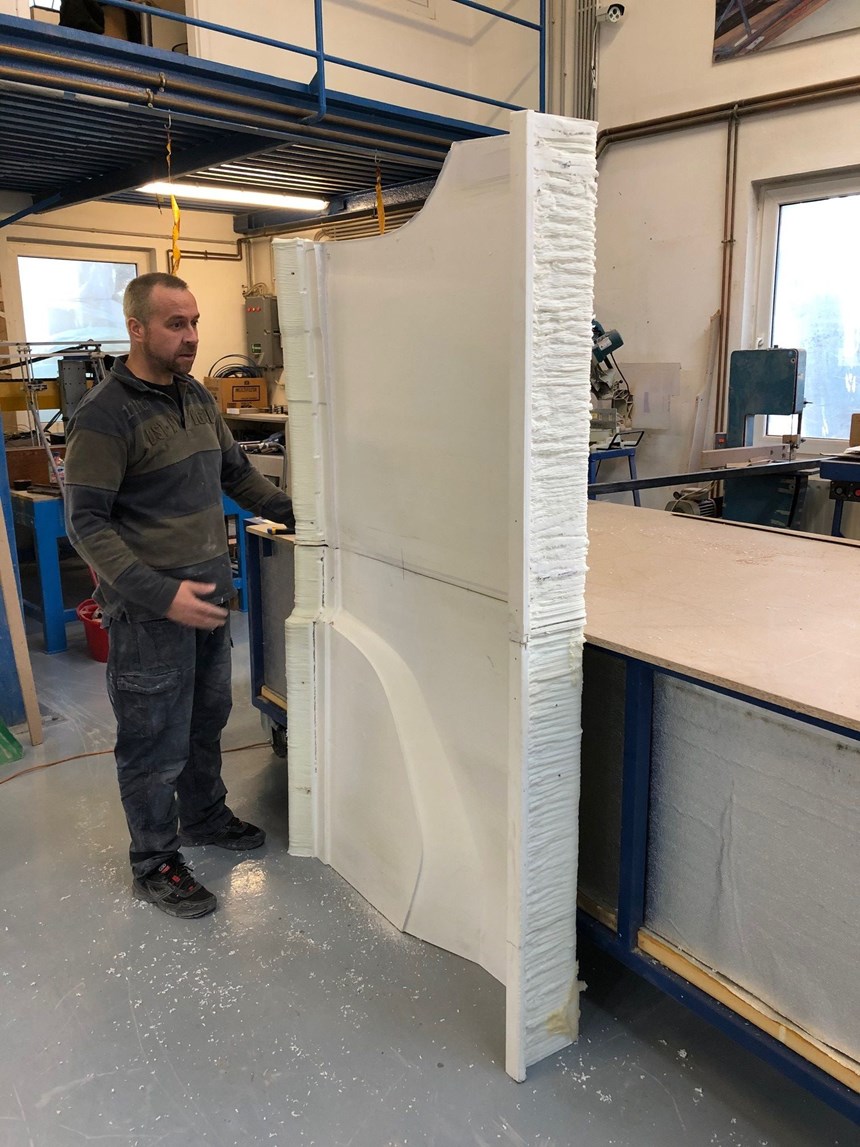 The mold was printed in four pieces, including right side piece and left side piece (shown here). 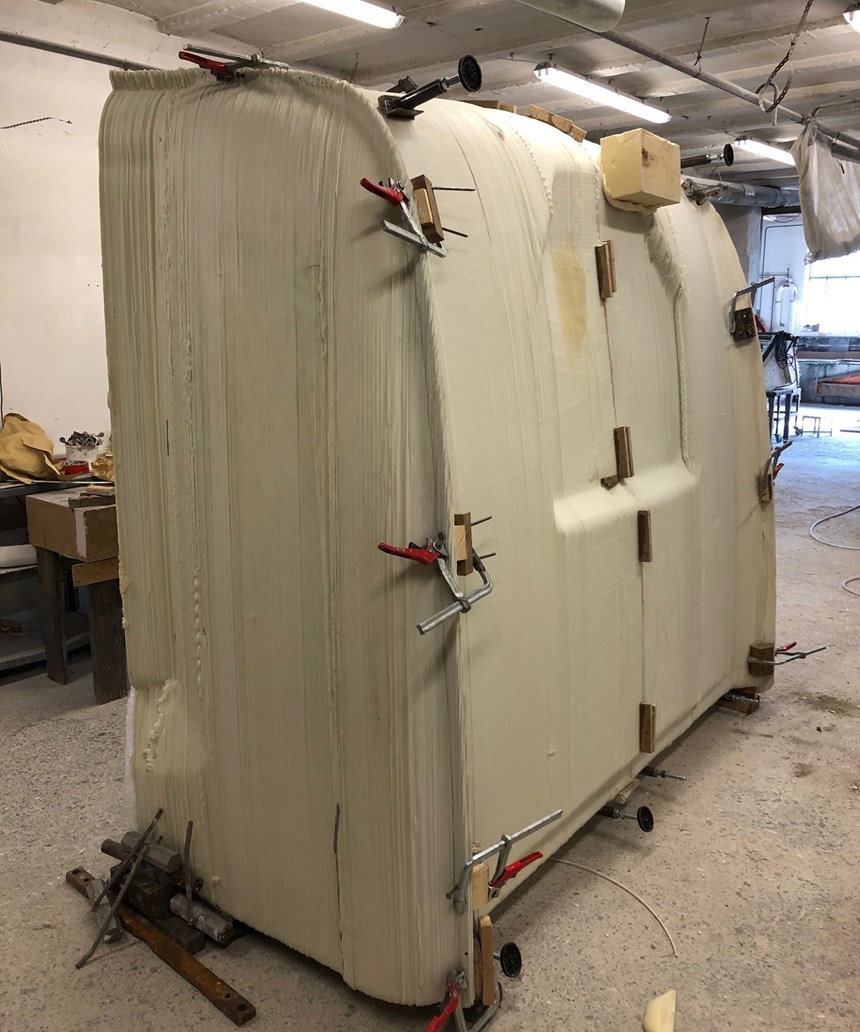 After each piece&rsquo;s molding surface was machined, the four pieces&nbsp;were screwed together and clamped to provide a surface for laminating. 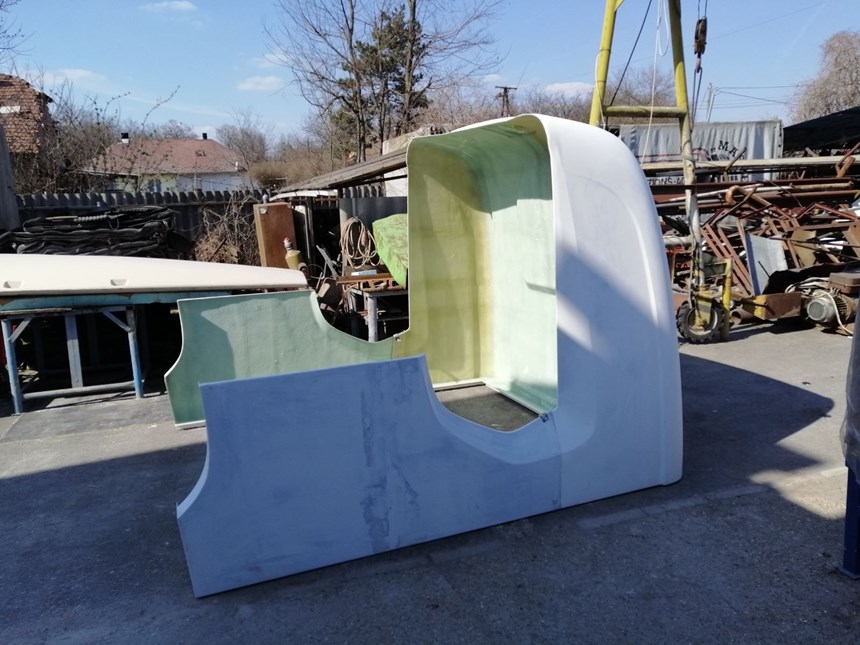 The sleeper cab shell was then laminated onto the 3D-printed mold surface.

Though the project was successful and 3D printing saved time, Juhász admits there is a lot to learn. “One of the biggest challenges with this approach is after the printing we need to find a 0 point (origin) with the milling machine and software. We do the printing vertically and the milling horizontally — so, the starting point and the direction of each operation is different.” It also seems expensive to print solid instead of using an infill? “For this project, we were at the beginning,” he explains. “An extruder head using pellets is cheaper than a large-format filament printer, but not as easy for printing infill. But we are planning to print a piece of furniture with infill in the future, so we will adapt the lessons learned to our tool making.”