According to Arnt Offringa, director of the GKN Aerospace Global Technology Center Netherlands (Hoogeveen), GKN Aerospace (Bristol, U.K.) has been very active in the WOT program, including the development of a wing spar demonstrator made via resin transfer molding (RTM) and four aluminum wing ribs. Another technology demonstrator recently delivered by GKN Aerospace involved the development of both a cost-competitive thermoplastic composite rib, and an innovative, modular press system for one-shot, out-of-autoclave (OOA) manufacturing to produce it.

Making the leap to thermoplastics

In 2018, GKN Aerospace began internal discussions about materials and manufacturing technologies that could be used to produce five demonstrator 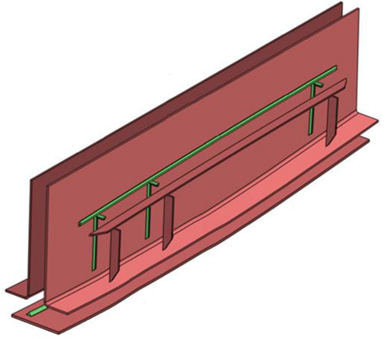 ribs for the WOT program. GKN Aerospace compared several material options, including thermoset and thermoplastic composites. Aluminum, the traditional material for commercial aircraft ribs, was chosen to produce four larger, inboard ribs, but for the smaller, outboard rib, the company decided to explore a composite option. Offringa notes that because the WOT demonstrator will be a composite wing, developing a composite rib that can compete with aluminum is a logical step.

Offringa explains that typical metal ribs require visual human inspection once the final wing is assembled. However, because of the ribs’ location on the interior of the wing, that means large elliptical hatches would need to be cut into the bottom wingskin so that humans can enter the wing to inspect them. “If you go to a composite rib, you have less fatigue in the ribs and fewer potential fatigue cracks that you have to inspect. Inspection becomes much simpler and less intensive, and you no longer need to build hatches into the wingskin. It will be a continuous wingskin,” he says.

Weight reduction, corrosion resistance and less invasive inspection benefits could be gained from either thermoset or thermoplastic composites. “We did an internal study and looked at weight, cost and industrialization, and after comparing the different technologies, the choice was made to go with thermoplastics, because it had the most potential and the best business case with respect to cost,” Offringa says.

Given its closer proximity to Airbus’s Filton, U.K. wing technology center where the WOT demonstrator will be tested, GKN Aerospace’s Bristol, U.K. branch is the main hub of the company’s WOT work. However, given GKN Aerospace Netherlands’ expertise in thermoplastics from its days as Fokker Technologies, the two GKN Aerospace teams joined forces for the rib demonstrator. “The design was done in the U.K., but the manufacturing development was done in the Netherlands, so it was a really nice cooperation between the different teams in GKN Aerospace,” Offringa says.

Sue Partridge, head of WOT at Airbus, notes, “Collaboration with partners is an important aspect of the Wing of Tomorrow Program. Through combining our resources, we can progress solutions which harness the capabilities of both our organizations for a better outcome.”

There are more than 20 ribs on a typical single-aisle aircraft wing. The thermoplastic composite demonstrator rib is the 14th on the demonstrator wing; the others will demonstrate alternative materials and processes.

Thermoplastic composite ribs are often manufactured via stamp forming for small aircraft, Offringa says. However, GKN Aerospace ruled out traditional stamp forming as an option for the WOT rib because commercial aircraft wings, even for narrow-bodies like the WOT demonstrator, are placed under very high compression and tension loads.

“If you were going to stamp form a thermoplastic rib in the traditional sense, then you would have to make a very thick rib, with a thick web to make it stronger so that it can withstand the forces acting on it,” Offringa says, and that is not preferable given weight reduction requirements. In addition, stamp forming would not be able to create a double-sided bottom flange component on the rib where the part connects to the lower wing skin; an extra component would need to be fabricated and bolted to the rest of the rib. GKN Aerospace needed a manufacturing process that allowed more flexibility for the design the team had in mind. GKN Aerospace’s 90-centimeter-long, 24-centimeter-tall thermoplastic rib features a vertical web and a bidirectional 8-millimeter-thick flange extended from the bottom of the rib. To meet weight requirements, the web is only 7 millimeters thick. To prevent buckling and increase stiffness, the web is reinforced by 3-millimeter-thick stiffening elements using GKN Aerospace’s butt-joint technology, which uses flat stiffener preforms and injection molded “filler” materials to create a strong, continuous joint (see “Thermoplastic primary aerostructures take another step forward” to learn about use of this technology on a Gulfstream fuselage panel manufactured with Solvay's carbon fiber/PEKK-FC tapes).

“We knew that if we could make this shape in composites and make it robust, then we’d have a very lightweight design with the weight reduction we were looking for. But the problem was, how do you make such a complicated shape cost-effectively and at high rates? That’s where we put our effort to create this new product,” Offringa says.

The process builds on technology that GKN Aerospace has used previously for the TAPAS (Thermoplastic Affordable Primary Aircraft Structure) project, and for a fuselage panel development for Gulfstream that uses the company’s butt-joint technology. For the WOT rib, GKN Aerospace developed an OOA, one-step consolidation process. “We’ve taken our previous work to the next level by going out of the autoclave for the first time,” Offringa notes.

First, unidirectional (UD) thermoplastic tapes are slit to the correct widths, and a laminator is used to preform the flat elements into two L-shaped web preforms. The web preforms, a flat preform for the flange, and smaller preform and injection-molded filler elements that make up the stringers are all loaded into a tool, which is placed inside a modular co-consolidation press that is similar to a resin transfer molding (RTM) press. The press closes, and a bladder system is used to create pressure from both horizontal and vertical directions, simulating the pressure in an autoclave. An integrated resistance heating system brings the composite to melt temperature briefly before cooling down for consolidation.

“We put most of the development effort into tuning and optimizing the tooling,” Offringa says. The system is designed to be modular; the tooling can be swapped out to accommodate ribs with different dimensions or other types of parts while keeping the same heating and cooling system. Though not necessary for these ribs, the press GKN Aerospace developed at its Technology Center can accommodate parts up to 6 meters long, which could also include other panels or beams.

The process control system is key when processing thermoplastics. Thermoplastics melt at higher temperatures than thermosets, and must be cooled in a controlled, consistent process to minimize warpage and maximize cystallinity. “It’s very important to control the exact process from start to finish,” Offringa says. “The thermal management of the heating cycle is very important.” (see “Thermoplastic (TP) forming issues” sidebar in this article for more detail on issues and importance of process control when using thermoplastics).

Special tooling features are used to enable the thin, integrated stiffeners to release easily from the tool. The demolded part is near net shape, and then is trimmed to form the finished part. From tool in to tool out, the entire process takes about 45 minutes. This means that with one press, about 15 wing ribs can be manufactured in an eight-hour shift.

Rib manufacturing of the future. This illustration depicts GKN Aerospace’s plans for a future high-volume production line based on the WOT pilot process. These plans include automated tape laying (ATL) for use in other projects.

“It ends up being a simple manufacturing process,” Offringa notes. “We’re doing many things at once: co-consolidating preforms with different shapes, creating the bottom of the rib to have a bidirectional flange, and at the same time we’re stiffening the web with the butt-jointed technology. Ultimately, though, we take all the elements of the material, place them in a tool, and we create one, homogenous part in one processing step.”

Testing, delivery and beyond 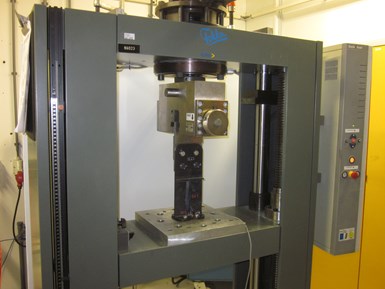 Testing. Subcomponents were tested to meet tension and compression strength requirements at GKN’s Isle of Wight and Hoogeveen facilities.

In late 2019, rib subcomponents were tested at GKN Aerospace’s Isle of Wight and Hoogeveen facilities, and Offringa says they passed tension and compression load requirements “by a wide margin.” He adds, “It’s strong, it’s tough, it’s easy to manufacture. This is a concept which turned out exactly as we hoped it would.” Compared to an aluminum version, Offringa says the thermoplastic composite version offers significant weight savings and is cost-competitive.

The company has delivered three ribs to Airbus, one of which will be assembled and tested on the WOT demonstrator. GKN Aerospace continues to work on optimizing its process and materials for commercial aerospace ribs, both for Wing of Tomorrow and beyond.