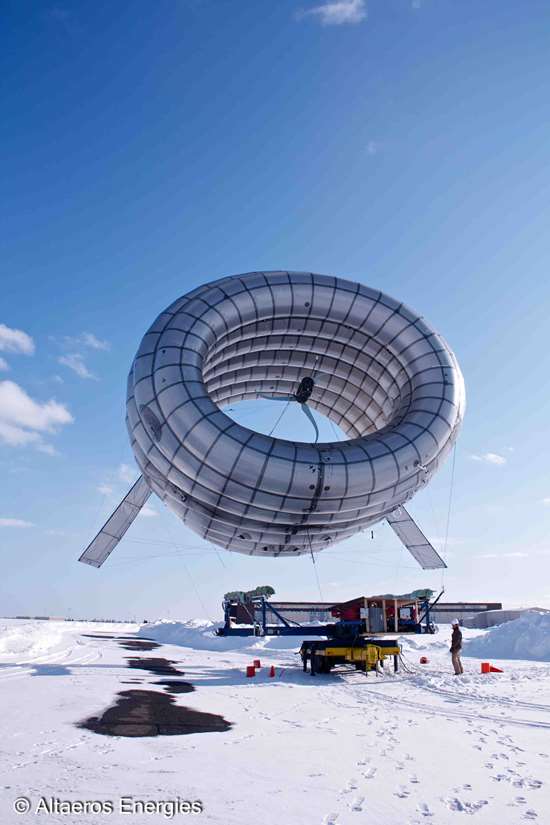 Far from the power grid, remote settlements pay dearly for electricity. In Alaska, for example, the cost of energy from diesel generators reportedly can reach $1/kW-hr (compared to $0.10/kW-hr or less for coal-, natural gas- or wind-sourced energy in the lower 48 states of the U.S.). Altaeros Energies (Boston, Mass.) aims to change that. A spin-off from the Massachusetts Institute of Technology (Cambridge, Mass.), the startup’s lighter-than-air Buoyant Airborne Turbine (BAT), can harvest the more consistent winds at higher altitudes because its elevation is not limited by the need for a tower. A $1.3 million (USD), 18-month demonstration project, partially funded by the Alaska Energy Authority’s Emerging Energy Technology Fund, is set, at a site south of Fairbanks, to break a world record as the highest wind turbine ever deployed — 1,000 ft/308m.

Adapted from aerostats (blimps) that have long lifted heavy communications and weather equipment skyward, the BAT consists of a helium-filled inflatable shell surrounding a turbine. High-strength tethers do double-duty, holding the BAT steady and transporting electricity to a power microgrid on the ground (Altaeros estimates the remote power and microgrid market at $17 billion per annum). Altaeros cofounder/CEO Ben Glass says the BAT prototype uses a small Skystream turbine, from XZERES Wind Corp. (Wilsonville, Ore.), with carbon fiber composite blades made by the University of Maine’s Advanced Structures and Composites Center (Orono, Maine). Altaeros, however, replaced the turbine’s aluminum nacelle with one made in-house to reduce turbine weight, says Glass, using a sandwich construction of three-ply carbon fiber skins over an aramid honeycomb core. “BAT is a low-cost power solution … that can power more than a dozen homes,” explains Glass, and can be transported easily and set up without the need for a crane.

In 2013, Altaeros successfully tested a proof-of-concept BAT in 45-mph/72-kmh winds and at a height of 500 ft/152.4m in Maine, and is currently working on rotor and nacelle designs for commercial-scale BAT deployments. The first product will have about 30 kW of capacity, slightly larger than the prototype, followed by scaled up products in the 100- to 200-kW range.