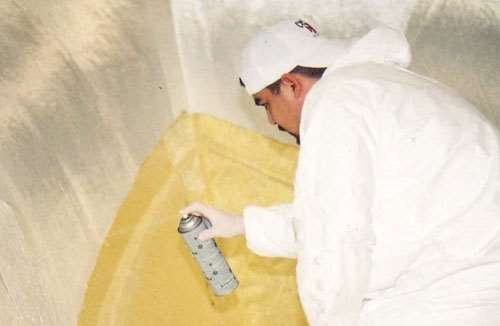 Aerospace manufacturers that adopt vacuum infusion processes are discovering what processors of boat hulls and wind turbine blades already know: Placement of multiple plies of slippery dry fiber reinforcements in molds with vertical sides or tight radii is problematic. Although a common trick of the trade is to use a spray adhesive to temporarily hold the materials in place until placement of the vacuum bag and subsequent injection, general-purpose spray adhesives, applied too thickly or unevenly, can retard or block resin flow through the reinforcements. The resulting voids or “dry spots” are hidden structural weaknesses and raise the risk of delamination under load. In some cases, small bubbles of uncured resin that could not disperse during infusion can cause osmotic blistering. Water that enters through the blister encounters the resin, forming an acidic solution that eventually breaks through to the laminate surface, causing a hole.

In 2004, Westech Aerosol Corp. (Port Orchard, Wash.) introduced InfuZene, a high-temperature, solvent-based spray adhesive tailored for infusion. According to the company, the adhesive doesn’t interfere with resin cure. Instead, Westech says, it is designed to crosslink and cure with vinyl ester, polyester or other styrenated thermoset resins.

Recent tests confirm these claims. One test, conducted for the company by an independent university composites-testing laboratory, showed that infused laminates made with InfuZene were up to 30 percent stronger in interlaminar shear strength than laminates made with a leading general-purpose spray adhesive, as measured by ASTM 2344 (Short Beam Shear Strength). In a separate trial, overseen by testing firm Critt Materiaux Poitou-Charentes (Rochefort, Cedex, France), InfuZene was tested alongside an adhesive typically used in yachtbuilding. The conclusion was that InfuZene showed a superior resistance to osmotic aging vs. the other tested product, which started blistering after only five days of exposure to a laminar flow of water.

Westech offers its product in 13-oz spray cans and in bulk, via a canister system with a reusable spray gun and hose.