This graph shows predicted versus measured rheology and shear rates for generic homopolymer polypropylene at different temperatures. Photo Credit for all images: University of Tennessee-Knoxville

A longstanding challenge in the advanced composites industry is to find ways to produce lower-cost carbon fiber so that all industries that want to use this valuable and effective composites reinforcement can. Carbon fiber costs have come down considerably thanks to decades of work to enhance productivity via precursor chemistry, machinery innovation, process enhancements and more.

One area that has shown great promise is the use of alternative precursors to conventional aerospace-grade polyacrylonitrile (PAN). For example, the U.S. Dept. of Energy (DOE, Washington, D.C., U.S.) and Oak Ridge National Laboratory (ORNL, Oak Ridge, Tenn., U.S.) have developed methods for producing carbon fiber from alternative precursors ranging from polymers, to lignin, to coal.

One of the differences is that textile-based PAN precursor, because it is intended for use in the textile industry (think drapes, clothes, furniture fabrics), is supplied in a wide-tow format that is inherently less costly than specialized aerospace-grade PAN precursor. During carbon fiber production, this has the effect of increasing throughput and lowering conversion costs compared with conventional PAN fiber. It also tends to produce much larger tow fiber — on the order of 300K to 450K on the line at ORNL’s Carbon Fiber Technology Facility versus 3K to 50K typical of conventional PAN carbon fiber. Moreover, while it takes longer to process TCF precursor, since it doesn’t contain reaction accelerators like conventional PAN and is typically run at lower temperatures (a function of the need to balance residence time and temperature), the fact that so much more fiber can be processed at a given time and that energy usage is lower on a weight or volume basis helps reduce costs. In fact, ORNL estimates that ~60% total energy savings for fiber conversion and ~50% cost savings are possible.

This in turn provides the opportunity to produce less costly fiber in unusually large quantities, and to use it to make products with a smaller carbon footprint. In industries like automotive/ground transportation, consumer electronics, sporting goods, building/construction and wind energy, TCF is an attractive reinforcement as applications tend to be stiffness driven, compared to strength-driven applications in aerospace. Notably, non-aerospace industries could potentially consume a lot of fiber. 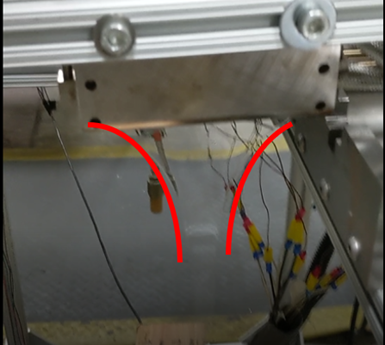 Polymer exiting the flooding die during TCF thermoplastic tape production. Red lines highlight flow of the polymer (which is not otherwise visible owing to resin transparency).

However, TCF is still a different product than conventional PAN carbon fiber, so work is needed not only to better characterize this fiber, but also to find ways to convert and use it. Because it can be processed in a ultrawide tow band, this precursor requires modifications of process equipment all the way through the fiber production process. It also changes post-production surface modification and packaging, and it will, of course, affect conversion processes ranging from making tapes and fabrics to prepregs and preforms.

Recognizing all the ways that TCF can solve the carbon fiber cost/availability problem on the one hand, but also creates new problems in how to handle, convert and package this material on the other, the Institute for Advanced Composites Manufacturing Innovation (IACMI, Knoxville, Tenn., U.S.) has been working on a number of member-supported research projects over the past three years to address these issues. One interesting project has looked at ways to convert the ultrawide tow band TCF into thermoplastic composite tapes.

Interest in thermoplastic composite tapes has been growing in many industries, but these products tend to be expensive, as specialized equipment and know-how are required to successfully impregnate any fiber with pre-polymerized, high-molecular weight and high-viscosity thermoplastic resins versus their unreacted, low-viscosity thermoset counterparts. It is all too easy to produce tapes with lots of voids and poor fiber wetout, ending with final parts that not only look awful, but run the risk of premature failure.

Dr. Uday Vaidya, professor and governor’s chair for Advanced Composites Manufacturing, University of Tennessee-Knoxville (UTK, Knoxville, Tenn., U.S.) and IACMI chief technology officer (CTO), has collaborated on thermoplastic composites programs since the early 2000s with George Husman, president of Husman Consulting Inc. (Cape Coral, Fla., U.S.) and retired director and CTO of Zoltek Co. Inc. (St. Louis, Mo., U.S.). Their many interactions led to the idea of inline impregnation of conventional heavy-tow carbon fibers (24K to 50K) to produce thermoplastic composite tapes at the back end of the fiber production line. Producing tapes immediately after fiber production would eliminate a separate intermediate process step and all the shipping and handling that entails. It is hoped this would help reduce costs of both tapes and parts made from those tapes.

Accomplishing this concept required development in both process and equipment to make carbon fiber-reinforced thermoplastic tapes in different tow sizes. Vaidya and Husman filed a provisional patent in conjunction with the University of Tennessee Research Foundation (UTRF, Knoxville, Tenn., U.S.) in 2018 covering a process for inline production of thermoplastic tapes reinforced with up to 50K tow carbon fiber. The following year, Vaidya and his UTK team extended this work to include thermoplastic impregnation of ultra-wideband TCF (300K to 450K tow) with a second filing.

As would be expected, there has been no shortage of technical challenges to address along the way. Fiber feed and handling required significant equipment modification, as TCF tends to be wider and involve more filaments than conventional carbon fiber. It’s also prone to catenary behavior during the fiber impregnation step of tape production. That means that a sinusoidal wave forms as tows feed into the impregnation die, causing tows to split unevenly and enter the die under different tensions, leading to tapes that twist, deform and achieve poor fiber wetout. 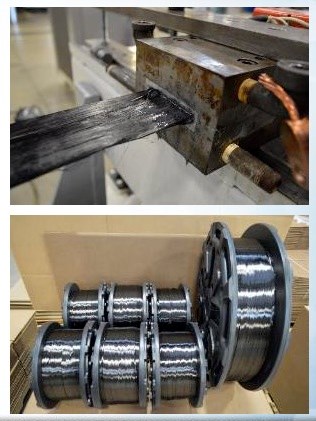 The UTK team has had to solve numerous challenges to develop both process and equipment capable of inline impregnation of carbon fiber — conventional or TCF — to produce thermoplastic composite tapes. The top photo shows ultra-wideband TCF tows entering the impregnation die and the lower image shows completed thermoplastic composite tapes rolled onto creels of different sizes that are ready to ship out for testing.

“Finding a way to maintain a balance between fiber tension and flexibility proved really challenging and required a lot of work,” explains Vaidya. “Our team came to understand just how important it was to maintain tow integrity in order to spread the filaments and achieve a high degree of wetout, which, of course, is critical to producing quality tapes.”

Then there was the sizing issue. TCF tow bands are heavily sized to help fiber move smoothly from creel to impregnation die where it is wet out with resin to produce tape. However, once at the die, previous research had shown that to achieve good wetout with higher-viscosity thermoplastics, the presence of sizing actually impeded impregnation, making it highly desirable to remove the sizing. Trial and error eventually led the team to develop a technique to burn off sizing just before tows entered the impregnation die.

To accurately predict resin rheology and polymer feed through the impregnation die and make good tape, new simulation and validation work was needed. The team focused on producing TCF tapes with polypropylene (PP) as well as polyamide 6 (PA6) — two thermoplastics widely used in automotive for their toughness and affordability. The team used PolyXtrue extrusion die design software from Plastic Flow LLC (Hancock, Mich., U.S.), which is based on the Williams-Landel-Ferry (WLF) model and provided excellent correlation with measured rheology and shear-rate results.

Die design itself was another important research area, especially when the team moved from standard 12K to 50K tows, and then to ultra-wideband TCF tows. At that stage, the die had to be completely redesigned and a two-stage process adapted. During the first stage, fiber is impregnated; during the second stage, optimized break angles for the tensioning/impregnation pins — which control the tension at which the carbon fiber is pulled, the fiber weight fraction (FWF), as well as quality control — are set in order to achieve desired properties in the completed tapes. Presently, the team has produced 30-50% FWF tapes in both PP and PA6, even with the heavier tows.

To rapidly cool tapes after exiting the die, a post-impregnation air-cooling system was developed. The team even had to work out a method to take up completed tapes onto creels/spools, owing to the width of the products and the challenges of downstream use of those tapes.

Vaidya says the team is currently focused on electronic integration, which includes building a formal graphical user interface and developing a programmable-logic controller (PLC)-based system. Ultimately, the team’s goal is to develop a thermoplastic tape production module that can be added to the back end of a TCF or conventional carbon fiber production line to facilitate production of secondary/intermediate thermoplastic tapes.

“Our team has faced many technical challenges, but we’ve also had some accomplishments,” Vaidya explains. “Handling such a wide tow band and successfully — and quickly — impregnating the fibers to achieve quality thermoplastic tapes without voids has been difficult. However, our team has explored a number of process parameters, including multiple iterations of die design; polymer flow simulations through the die; and various aspects of fiber feed, tensioning and preheating. Not only have we proven out some of the claims in our patent, but we’ve also achieved impregnation line speeds of 12 feet/minute [3.7 meters/minute] while producing 30% FWF polypropylene and PA6 tapes.”

Vaidya says intellectual property protections surrounding this tape technology have been filed with the UT Research Foundation — one with traditional 24K and 50K fibers and one with the wide-tow fibers. Commercialization, he says, will focus on inline impregnation within a carbon fiber line. “This will greatly reduce post-processing and adapt readily, bringing the overall cost of the intermediate down further,” he says.

How might these tapes be applied? Vaidya says the options are many: “For example, the material can be chopped into long-fiber form, used in pultrusion feedstock, large-tank filament winding, overmolding (similar to organosheet) in compression molding, sheet stock in hybrid processes — e.g., with LFT [long-fiber thermoplastic], SMC [sheet molding compound] and other synergistic materials.” This opens a range of product types that would benefit from stiffness improvements, high-impact toughness and improved processability such as shapes, draws and bends, recycling and reversible chemistries.